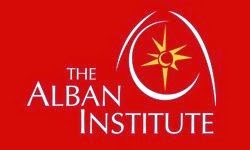 The Alban Institute, a resource for mainline denominations and clergy for over 40 years, recently announced that it was closing its doors ("Alban Institute, a Resource for Mainline Institutions, to Shutter"). It is another sign of mainline Protestant decline, but as I wrote last summer when discussing the closing down of the United Methodist Reporter, mainline leaders appear to be in denial  ("Mainline Denial"). I've heard them explain the decline away in numerous ways. One United Church of Christ (UCC) leader compared UCC membership patterns with those of a particular conservative denomination, and after noting their similarity, he concluded that theology had nothing to do with the UCC's decline. Unfortunately, he cherry picked his comparison case and ignored all the cases that contradicted his argument (a good example of why a basic course in statistics should be required in high school). Others have argued that because studies show that people over report how often they attend church, evangelical denominations are really doing better than mainline ones. Of course, over reporting occurs in both evangelical and mainline denominations, so while evangelical church attendance may be overstated, so is mainline church attendance (a good example of why a basic course in logic should be required in high school). And still others take heart in reports that mainline denominations aren't the only the only ones in decline; so are evangelical ones. But that doesn't appear to be the case. For better or worse, evangelical Protestantism is alive and well in the U.S., while mainline Protestantism is not (and I'm a mainline Protestant) ("The Myth of Evangelical Decline").

What's to be done? I offered a couple of suggestions in my post last summer ("Mainline Denial"), but I'm unsure if decline, at least to a certain extent, is necessarily a bad thing. As theologian Stanley Hauerwas has argued, the loss of "power" may be good for the church. It may help us recover the core of the gospel, which according to Hauerwas (and others) we lost when Constantine converted to Christianity. That doesn't mean that we shouldn't try to attract new members, but we shouldn't give up the core of the gospel to do so. It also means we have to invite our  family, friends, and acquaintances to church, something many mainliners are reluctant to do because it smacks of evangelization  ("Why Do Some Churches (and Synagogues, Temples, Mosques) Grow?"). Nevertheless, if we don't, the mainline church will eventually wither and die, and more premier institutions like the Alban Institute will cease to exist.
Posted by Sean F. Everton at 5:24 PM