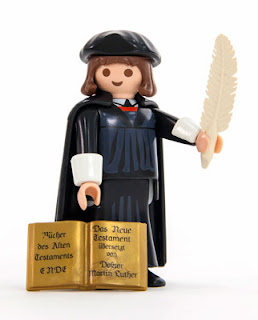 Tuesday marks the 500th anniversary of when Martin Luther reportedly nailed his 95 Theses ("Disputation of Martin Luther on the Power and Efficacy of Indulgences") to the door of All Saints' Church in Wittenberg. It's uncertain whether he actually did nail the these to the door but it is certain that he sent them to his bishop, Albert of Mainz. Even if he did nail them to the door, it wouldn't have been seen as an act of defiance. The door functioned as a local bulletin board where faculty members routinely posted matters to be debated. Regardless of what happened, whether he nailed his 95 theses to the church door, mailed them to his bishop, or both, his act is symbolically seen as the beginning of the Protestant Reformation.

As many readers know, Luther became concerned with the selling of indulgences. The selling of indulgences is related to the Roman Catholic doctrine of Purgatory, which holds that there is an intermediate state between heaven and hell for people who die neither as saints nor as unredeemable sinners. In Purgatory, souls are cleansed by purging fires, which makes them fit for entry into heaven. Roman Catholics believe that the Pope holds the spiritual key to a “treasury of merit,” which is a superabundance of merit attained by Christ and the saints, and indulgences are certificates the Pope issues by which he transfers some of this merit to repentant sinners. If such sinners perform an adequate number of acts of penitence and devotion, a portion (or perhaps all) of their time in Purgatory can be remitted. Indulgences can also be obtained on behalf of another, living or dead. In his day, Luther believed that the practice of selling indulgences was being abused. He argued that they were being issued with little consideration for the remorsefulness of the penitents but rather more for the funds that the Church was able to collect by issuing them.

Unsurprisingly, numerous books have recently been published about the Reformation and Martin Luther (not to mention Playmobil versions of Luther -- see picture, upper right). There are so many, in fact, that it's difficult to know where to begin. A helpful resource is Peter Marshall's, The Reformation, which is part of Oxford University Press's "A Very Short Introduction" series. The Wikipedia articles on Martin Luther and The Reformation also provide good overviews, as well as links to other papers and books that offer more detailed information. Finally, the University of Washington political scientist, Anthony Gill, has recorded a series of podcasts on the Reformation (or Reformations) that feature a number of excellent scholars. These podcasts can be found at the Research of Religion website (Protestant Reformation Series) or can be downloaded from iTunes. A brief description of (and link to each of) the podcasts appears below.

James Felak on the Counter-Reformation


As a capstone to our Protestant Reformation Series, we give the “other side” its day in court to make their case. Prof. James Felak (University of Washington) discusses how the Roman Catholic Church reacted to Luther and the Protestant fervor that followed in the decades after Luther sparked a religious fire. We cover everything from the Diet of Worms to the Council of Trent, and to Jesuits, Inquisitions, and Carmelites without shoes. This is an inordinately fun exploration of the 16th century religious landscape.

Rodney Stark on Myths of the Reformation


Many misconceptions surround the Protestant Reformation, from it being the birth of capitalism to it prompting Europe’s secularization. Noted sociologist of religion Rodney Stark (Baylor ISR) joins us to discuss these myths and more. With the 500th anniversary of the Reformation just about a month away, this is a great opportunity to refresh on some interesting talking points to engage your friends, family, and colleagues.


The 500th anniversary of the Protestant Reformation will be celebrated on October 31st of this year, marking the date that Martin Luther disseminated his famous 95 Theses on papal authority and indulgences. Prof. Emily Fisher Gray of Norwich University contextualizes this historically important document and explains how the themes of liberty and authority play out in this and other of Luther’s writings. We review the impact of this document, as well as Luther’s thoughts about a peasant uprising he inspired.


With the 500th anniversary of Martin Luther’s nailing of his “95 Theses” to the doors of the Wittenberg Cathedral approaching, we take a pause to examine the early life of Martin Luther with Rob Sorensen, a PhD candidate at Faulkner University and author of a book on Luther’s life. Our attention is devoted mostly to Luther’s formative years leading up to his defiant act in 1517, but there are reflections on his life following excommunication from the Roman Catholic Church.


What did Europe look like economically, politically, and religiously on the eve of the Protestant Reformation? What broad historical trends facilitated the success Martin Luther’s schismatic break from the Catholic Church where others in the past had failed? Prof. Steve Pfaff (Sociology, University of Washington) discusses the factors spurring on the Protestant Reformation, sharing some of the most up-to-date research on how social movements spread.


With the quincentennial anniversary of the Protestant Reformation (dated from October 31, 1517), we begin an occasional series looking at the events and people that made up this historic event. We start with Prof. Marion Goldman (sociology, University of Oregon) who argues that Martin Luther had the characteristic of a “spiritual virtuoso” and that this factor was critical to the split that transpired between the Catholic Church and Protestants. Spiritual virtuosos are individuals who are concerned with personal sanctification, are reluctant leaders, but do acknowledge their role in inspiring social movements. Our conversation also covers other similar individuals such as leaders of the Abolitionist Movement and Steve Jobs of Apple fame.

Strangers in Their Own Land 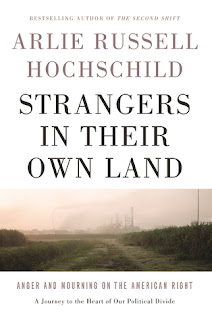 In her wonderful book, Strangers in Their Own Land, sociologist Arlie Hochschild asks us to imagine waiting in a line at the end of which lies the American Dream. However, not only are we waiting in line, but we've been waiting in line for a very long time. And while we've been waiting, people have been cutting (unfairly) into the line ahead of us, and they aren't doing it by themselves. They're getting help. In particular, they're getting help from the government, usually the federal government. Moreover, there are others (many of whom have already reached the end of the line and are openly contemptuous of how we live and what we believe), who think it's just fine for the government to help the line-cutters.

Although with far more detail and nuance than I do here, Hochschild crafted this imaginary scenario in order to illustrate what she calls the "deep story" of the Louisiana Tea Party supporters she got to know after spending five years (2011-2016) interviewing and living among them. She believes it helps explain why many of those who live in one of our nation's poorest and most polluted states vote for candidates who resist the federal government's help and oppose regulating industries such oil and gas. She argues that over the years they have come to distrust the federal government and are more inclined to place their faith in capitalism and the free market. While the former gives away jobs to others (i.e., the line-cutters), jobs which they believe rightfully belong to them, the latter does not. Instead, capitalism and the free market promises them employment, and if pollution is one of the costs, so be it.

All this leads her to conclude that to understand the appeal of someone like Donald Trump, we need to pay more attention to how emotions inform the political choices that people make. She argues that many of the people she met vote for their emotional, rather than economic, self-interest because they've grown tired over feeling marginalized, left behind, and mocked by liberal elites who typically support big government. And they see Donald Trump as someone who is willing to put an end to the line-cutting and defend their way of life.

All this sounds right to me. Elsewhere, I've argued that folks on the left need to stop mocking the beliefs of blue collar individuals ("Don't Mock Working Class Religion" "Hillbilly Elegy: A Good Place to Start"). Merely advocating for policies that will benefit them economically is not enough. Some empathy for their way of life needs to be demonstrated ("Two Cheers for Conservative Religion"). That doesn't mean that we have to agree with all that they believe and practice, but there's a difference between civilly disagreeing with someone and making fun of what they've always believe to be true. A very big difference.
Posted by Sean F. Everton at 5:53 PM No comments: