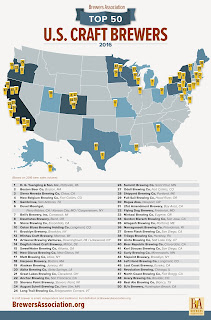 A couple of years ago, I cobbled together a list of the best craft breweries in the the U.S. based on three separate rankings ("The Best Craft Breweries in the U.S."). It seems like it's time for an update. To such an end, I tracked down three recent rankings of the U.S. craft brewers:
The first and third ranked the top fifty craft breweries, while the second ranked the top 25. Thus, I took the top 25 from each of the three lists, assigned each brewery points based on their ranking (25 for first, 24 for second, 23 for third, etc.), added them together, and arrived at a preliminary ranking of the top craft breweries in the U.S (46 in total). I then eliminated any brewery that was only listed in one of the rankings (I didn't do this two years ago, but it was possible for a brewery to be ranked high in one ranking, be completely missing from the other two, and still end up in the top 20, which struck me as misleading), which left me with 23 breweries in the following order:
I then decided to modify the rankings based on each brewery's overall score on "Untappd," which is probably the most popular app for rating different beers. To accomplish this, I first rescaled the original number of points to scores ranging from 3.0 to 5.0 and then added the brewery's Untappd score (although a beer can be ranked from 1.0 to 5.0 on Untapped, most breweries overall scores, which is a weighted average of its scores on all the beers it has ever made available, range between 3.0 to 5.0). After adding these two scores together, the top 23 craft breweries are as follows:
The two sets of rankings don't differ appreciably. The top four remain the same although Stone and Sierra Nevada switch places. Russian River moves up to #5 in the second ranking, and it probably should even be higher since it wasn't included at all in the Brewers Association top 50, something that strikes me as very odd. The Alchemist brewery made the biggest leap between the two lists, from #15 on the first to #8 on the second, reflecting the fact that of all 23 breweries, it has the highest Untappd rating.

Another weakness in the rankings is that a number of great breweries exist that have yet to capture national attention. The Crux Fermentation Project in Bend, Oregon, is an excellent example, as is Fieldwork Brewing Company in Berkeley, and Hapa's in San Jose. And, of course, I'm only aware of them because I visited them; other readers can certainly point to others that deserve consideration. Nevertheless, I don't think anyone would deny that the 23 breweries listed above are all excellent and deserving of their status.
Posted by Sean F. Everton at 6:42 PM 1 comment: 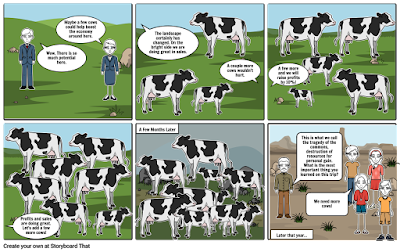 However, more recent research, in particular that of political scientist Elinor Ostrom, has demonstrated that other solutions exist. Ostrom's study of common-pool resource (CPR) groups found that groups can avoid the tragedy of the commons without resorting to top-down regulation or privatization if certain conditions are met ("Elinor Ostrom's 8 Principles For Managing a Commons"):
I intend to explore these principles in more depth in a subsequent post, but for now it is suffice to note that Ostrom's work was so influential that she was awarded the Nobel Prize in economics in 2009. Those who are interested can view here prize lecture at the Nobel site: https://www.nobelprize.org/mediaplayer/index.php?id=1223
Posted by Sean F. Everton at 4:46 PM 3 comments: 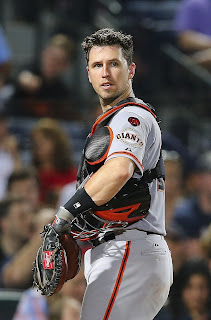 Back in August ("Should the Giants Panic?"), I argued that the SF Giants shouldn't worry too much about how poorly their season had gone. I attributed their surprising subpar year to a combination of injuries to key players (Buster Posey, Madison Bumgarner, Brandon Crawford, Hunter Pence, Johnny Cueto, and Mark Melancon) and off-years from Crawford, Belt, and Pence. I conceded that Pence's off-year may reflect that he's on the downward slope of his aging curve, which could mean that 2018 won't be any better than 2017. However, I'm reasonably confident that Belt and Crawford should bounce back in 2018.

That said, I did argue couldn't stand pat; they needed to make some moves in the off season. In particular, I argued that they needed to (1) pick up a position player who could hit with power, (2) bolster their bullpen, and (3) find a fifth starter. With the additions of Evan Longoria and Andrew McCutchen, they appear to have accomplished the first. Neither hit for power like Giancarlo Stanton, but the combination of the two should help the Giants offense immensely. In terms of the second, the bullpen still strikes me as a little weak, but Ty Blach (if he doesn't end up as the Giants' fifth starter) could prove invaluable as a middle-inning reliever, and maybe Derek Law will rediscover what made him so effective in 2016. In terms of the third, the Giants haven't added a fifth starter, but the emergence of Chris Stratton toward the end of last season was encouraging. He surely can't be any worse than Matt Moore was last year. And then there are others, like Tyler Beede, who could give the Giants a boost by summer.

One area that I didn't identify as a weakness (but should have) was the Giants' defense, in particular their outfield defense. By some metrics, they had the worst defensive outfield in MLB last year, a defense that was so bad that it increased the ERA's and WHIP's of all of their pitchers (and in particular Jeff Samardzija). It looks like in 2018 the Giants will be better. The addition of Andrew McCutchen will help, as will signing Austin Jackson. Moreover, Gorky Hernandez's emergence in the second half of last season (when he hit .281 and patrolled PacBell's CF and Triple's Alley like the Giants need) gives the Giants someone they can alternate with Pence, McCutchen, and Jackson, as well as inserting him as late inning defensive replacement.

Nevertheless, after watching the Dodgers and Astros tear it up during last year's World Series, I'm not as sanguine about the Giants chances as I was back in August. I don't know if they have the firepower to compete. What's so impressive about the Dodgers and Astros (not to mention the Cubs, Indians, and Yankees) is that it that their line-ups have few, if any, holes. It's hard to say that with the Giants. Although a line-up that includes Evan Longoria, Andrew McCutchen, Buster Posey, Joe Panik, Brandon Crawford, Brandon Belt, and (maybe) Hunter Pence is nothing to sneeze at, I don't think it compares with the MLB's elite teams.

So, how will the Giants do in 2018? They should definitely be better than they were in 2017, but since they're in one of the MLB's toughest divisions, it'll be difficult for them to reach the playoffs. In order to to do, their pitching will have to be among the league's best (which is possible), their defense will have to be stellar (which is highly possible), and their hitting will need to be good enough so that opposing teams have to worry about someone other than Buster Posey.
Posted by Sean F. Everton at 10:07 PM No comments: