Ulysses S. Grant Was a Better President Than You Probably Thought He Was 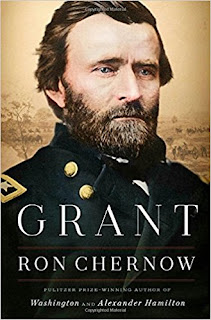 A recent survey of 170 members of the American Political Science Association’s Presidents and Executive Politics section came up with a ranking of the best to worst presidents. Unsurprisingly, Lincoln was selected as the best and Trump as the worst - even among Republican scholars Trump only ranked 40th out of 44 (Note: Although Trump is our 45th President, there have only been 44 individuals who have served as President because Grover Cleveland is counted twice because he served two non-consecutive terms). A summary of the survey can be found at the NY Times ("How Does Trump Stack Up Against the Best — and Worst — Presidents?"), while a more detailed report can be found here ("Official Results of the 2018 Presidents & Executive Politics Presidential Greatness Survey").

What is perhaps more interesting is the jump of Ulysses Grant from 28th to 21st. Like many people who grew up in the 60s and 70s, I was taught that Grant was a marginal general and a terrible President. However, Ron Chernow's recent biography of him, Grant, has challenged much conventional wisdom. He notes that much of the disdain for Grant among earlier historians has been influenced by misplaced admiration for Robert E. Lee. Chernow points out that although Lee was a great battle strategist, he lacked Grant's ability to fashion an overall war strategy. Until Lincoln moved Grant from commanding the Western Army to head of the all of the Union forces, general after general lost to Lee. Grant was unable to defeat Lee, but Lee never forced him to retreat (as he did the others), and Grant kept Lee pinned down in Richmond, allowing the other two prongs of his overall strategy (William Sherman in the deep South, and Phil Sheridan in the Shenandoah Valley) to proceed relatively uninhibited. Moreover, Lee was an unrepentant racist until his dying day. Notions that he only fought for the South because he felt obligated to defend his native Virginia is a myth. As Chernow notes, Lee “remained a southern partisan” who “never retreated from his retrograde views on slavery.”

President Grant did have his issues. His primary weakness was his credulity. Many of those around him took advantage of his unfailing trust in those he believed to be his friend, and this led to a number of scandals while he was President, scandals that never touched him directly, but it did affect peoples' perception of his administration. Still, he was the only President between Andrew Jackson and Woodrow Wilson to serve two full consecutive terms, and there were many who wanted him to run for a third in 1880 (four years after his previous term ended). Grant was also the only person who stood in the way of the South from reinstituting racial segregation. It is no accident that Lincoln's vision for Reconstruction ended when Grant stepped down as President, which set the stage for the implementation of the Jim Crow laws shortly thereafter. Grant also took active steps to curb the KKK. In fact, he put them out of business, and it wasn't until after the release of the movie, The Birth of a Nation, that the KKK was reborn. It is no wonder that Frederick Douglass eulogized Grant as “a man too broad for prejudice, too humane to despise the humblest, too great to be small at any point. In him the Negro found a protector, the Indian a friend, a vanquished foe a brother, an imperiled nation a savior.” Douglass didn't even praise Lincoln like that.

It is too difficult to summarize Chernow's argument here. His book does run over 1,000 pages. However, George Will has written an excellent review ("Hysterical mobs are crudely judging history. One book offers a better way"). Bill Clinton's review for the NY Times is also quite excellent ("President Clinton Looks Back at President Grant"). Looking for the Frederick Douglass quote noted above, I stumbled across a review ("U.S. Grant was the great hero of the Civil War but lost favor with historians") of a 2014 book about Grant ("U.S. Grant: American Hero, American Myth") in which the author (Joan Waugh) challenges many of the negative myths concerning Grant. It also puts forth an argument why for generations Grant has been looked down upon by historians (and as a consequence middle and high school teachers):


The “Lost Cause” interpretation of the war, created by the Confederate generation and later adopted by such influential historians as Douglas Southall Freeman, portrayed Southern commanders as chivalrous aristocrats waging a noble war against the industrialized and more populous North. They heaped praise on Robert E. Lee at the expense of the man to whom Lee surrendered.

Let's hope such interpretations are now behind us.
Posted by Sean F. Everton at 3:21 PM No comments: