Terrorists Aren't Stupid (Nor Are They Ignorant) 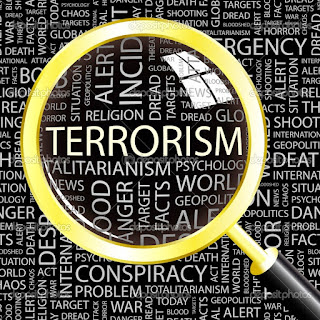 I've written about all this before, but I think it bears repeating: terrorists aren't stupid, nor are they ignorant. Numerous studies have found that terrorists tend to be well educated, have middle class backgrounds, and have attended secular, rather than religious, schools as children ("The Root Causes of Terrorism"). Unfortunately, a number of our leaders (and potential leaders) seem to think that they stupid and/or ignorant. To wit:
Put simply, terrorism is a complex phenomenon that doesn't lend itself to easy answers. Elsewhere, I've discussed how we might be able to prevent, detect, and disrupt future terrorist attacks ("On the Complex Nature of Countering Terrorism"), but as Freakonomics co-author Steven Levitt has noted, "there is a virtually infinite array of incredibly simple strategies available to terrorists... [thus] if terrorists want to engage in low-grade, low-tech terror, we are powerless to stop it." ("Terrorism, Part II"). I'm not sure I agree that we're completely powerless, but if we keep treating terrorists as stupid (or ignorant), they will continue to outwit us and we might as well be.
Posted by Sean F. Everton at 6:06 PM No comments:

The Warriors Need to Discover Their Jeremy Affeldt and Madison Bumgarner

Heading into the 6th game of the 2014 World Series, the San Francisco Giants held a 3-2 game lead over the Kansas City Royals, but the Royals hammered Giants' starter Jake Peavy for 5 runs in less than two innings en route to a 10-0 blowout to force a Game 7. Things didn't look good for the Giants because of their old and injury-riddled pitching staff and the fact that their ace, Madison Bumgarner, had pitched only two days before. However, although Giants' starting pitcher Tim Hudson didn't make it out of the second inning, pitchers Jeremy Affeldt (2 1/3 innings) and Madison Bumgarner (5 innings), put the Giants on their back and carried them to a 3-2 win and their 3rd World Series championship in 5 years.

Needless to say, after a Game 6 thrashing at the hands of the Cleveland Cavaliers, the Golden State Warriors need to discover their Affeldt and Bumgarner. They need two or three players to step up and put the rest of the team on their back. Steph Curry, Klay Thompson, and Draymond Green are the obvious choices, but it could be someone else. It doesn't really matter who. All that matters is that it happens. Otherwise, it could be a long offseason of wondering what could have been.
Posted by Sean F. Everton at 3:48 AM No comments:

Trump's Opponents Need to Dial it Back 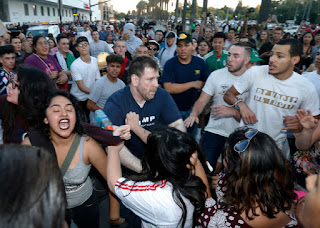 I get why people don't like Donald Trump and fear a Trump presidency. Like many people I think he's remarkably ill-informed and rather mercurial in his decision-making. The thought of him at the head of the most powerful country in the world is frightening. I get it. I don't want it either. But Trump's opponents need to dial it back. This past Thursday in San Jose protestors attacked Trump supporters at one of his rallies. This only makes Trump look sympathetic. As an editorial in the San Jose Mercury News stated ("Donald Trump rally violence shames San Jose"):


We understand the anger and passion of protesters Thursday outside the San Jose Convention Center, in a city where Mexican heritage is something to celebrate and tolerance is a hallmark. We know violence is a human response to bullying, and Trump early on encouraged his own supporters to rough up protesters.

But what happened in San Jose actually elevates Trump, making him a victim and his opponents thugs out to silence free speech. We know not everyone outside the convention center was there for a fight -- our reporters talked to many who felt strongly about Trump but wanted no part of the fighting -- but the fights are what people see all over the internet.

So, if you don't like Trump, don't vote for him. Voice your concerns. Sign up for a workshop on nonviolence. But please, please, don't attack his supporters. It's not helping.
Posted by Sean F. Everton at 10:24 PM 1 comment: