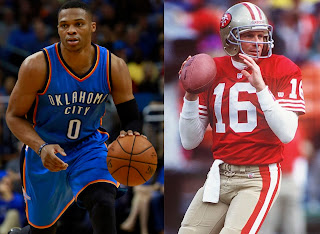 Back when Joe Montana still played for the 49ers, a glance at his passing yards could tell you in an instant how the Niner offense functioned that day. If Montana threw for 250-290 yards in a game, then you knew that the offense had put together a well-balanced attacked, and the Niners probably won the game. However, if Montana threw for more than 300 yards, then it was likely that the offense struggled and the outcome of the game into doubt. In other words, the Niners were better as a team when Montana's personal stats were more modest.

I think the same could be said for Russell Westbrook. The Thunder play better when his personal contributions are more modest. He put up some incredible numbers this year for the Oklahoma City Thunder, but when he got his teammates involved and stopped trying to do it all by himself, that the Thunder played well. As Fox Sports columnist Brent Pollakoff recently noted ("5 Things the OKC Thunder Need to Fix"). Westbrook needs to "dial it back":


This is the most difficult task ahead for the Thunder, especially after Westbrook likely will be coming off of an MVP season. But his historically high individual usage rate didn't translate into any real team accomplishments, and as we saw in the fourth quarters throughout this playoff series, his insistence on taking seemingly every single shot (no matter what the defense was like or where he was on the floor) only hurt his team's chances down the stretch of close games.

Westbrook proved his point in his first season without Kevin Durant by his side; we all know now that he can play as well as anyone in the league whenever he feels like it. But he needs to dial it back next season and get his teammates involved so he doesn't have to do it all alone. Only then will his team have a chance at true success. 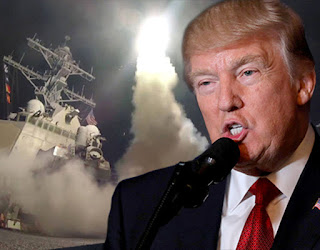 I think it was New York Times columnist Thomas Friedman who remarked a few years ago, "that just because George W. Bush says or does something, doesn't mean he's wrong." Friedman, of course, was criticizing those (primarily) on the left, who knee-jerkily opposed anything "W" did. Friedman's sentiments hold true for our current President. Just because Trump does or says something, doesn't mean he's wrong, which is probably why so many on the left are scrambling after he ordered missile attacks after Syria's President Assad used nerve gas on some of its citizens, including children.

In keeping with his tradition of never accepting responsibility for anything, Trump blamed Obama for Assad's use of chemical weapons, and he is probably correct that Obama's choice to use diplomacy rather than military force (something that Trump applauded at the time, by the way) didn't have any palpable effect in reigning in Assad. Trump deserves some of the blame, though. Just a week before the attack, Trump's Secretary of State, Rex Tillerson, and his ambassador to the UN, Nikki Haley, both stated that ousting Assad was no longer a goal of American policy, statements that Assad almost certainly saw as signals that he could do just about anything he wanted and Trump would look the other way.

My own take on the missile attack is somewhat mixed: