Who's Laughing Now? Francona and Epstein Are Back in the World Series

Remember when the Boston Red Sox slumped at the end of the 2011 season, finishing third in the AL East when they appeared poised to make a run at another World Series title? You may recall that Red Sox fans and ownership blamed manager Terry Francona ("The Scapegoating of Terry Francona") and General Manager Theo Epstein ("The (Continued) Unraveling of the Red Sox") for the woes, banishing them from Boston although together they helped break the curse of the "Bambino." But you have to wonder. Who's laughing now? The Cleveland Indians, who are coached by Francona, and the Chicago Cubs, whose general manager is Epstein, are in the World Series. I may be going out on a limb here, but I think it's obvious that neither Francona nor Epstein were the problem back in 2011. So you have to ask yourself: Who's laughing now? It surely aint the Red Sox.
Posted by Sean F. Everton at 10:36 PM No comments:

How Can Anyone Not Root For the Cubs (Except Dodgers' Fans)?

San Francisco Giants fans, at least those who watched them after the All-Star break, had a sense that at some point during the playoffs, the Giants' bullpen would cough up the lead and blow another save. For a variety of reasons, primarily the aging of three key relievers who helped the Giants win three World Series (namely, Sergio Romo, Santiago Casilla, and Javier López), the Giants' bullpen simply wasn't that good this year. In fact, FiveThirtyEight called it "atrocious" ("Major League Baseball Is About To Get Random"). Although I never root against the Giants, I have to admit that if their bullpen was going to blow a save in the playoffs, I'd much rather have them do it against the Cubs than against the Nationals, Dodgers, Blue Jays, or Cleveland as long as (and this is important) the Cubs win it all.

Which brings me to the primary point of this post. Except for Dodger fans (and maybe Mets fans), how can anyone not root for the Cubs? It's been over 100 years since they've won the World Series, and it's time. They have a great manager, a great group of ballplayers, and a great set of fans. So, why not? Let 2016 be the year of the Cubs -- although it would've been really cool if they'd won it last year with the prediction in one of the Back to the Future movies ("Back to the Future? Will the Cubbies Win the World Series in 2015?"). Who knows, it could be another 108 years before they get another shot (let's hope not).
Posted by Sean F. Everton at 11:11 PM No comments:

Here's a modest proposal: teach basic statistics in high school. To be sure, many of us fear statistics. This, however, is ironic since most of us use them every day, whether we are discussing sports (e.g., batting averages, passer ratings), the economy (e.g., inflation, gross national product), how we or our children are performing in school (e.g., grade point averages, SAT scores), or the weather (e.g., temperature, wind chill factor). As the economist Charles Wheelan notes:


Students will complain that statistics is confusing and irrelevant. Then the same students will leave the classroom and happily talk over lunch about batting averages (during the summer) or the windchill factor (during the winter) or grade point average (always)… the same people who are perfectly comfortable discussing statistics in the context of sports or the weather or grades will seize up with anxiety when a researcher starts to explain something like the Gini index, which is a standard tool in economics for measuring income inequality.

However, we don't have to seize up with anxiety when learning statistics. Most are relatively easy to understand once they're explained, and while no measure is perfect, statistics allow us to capture a lot of information in a simplified form. More importantly, when they are applied to complex phenomena, they can help us separate the wheat from the chaff, genuine associations from spurious correlations, and actual evidence from selective anecdotes. And in a world where much of what passes for informed debate tends to rely more on the cherry picking of data than the dispassionate analysis of it, statistics can help.

So, let's teach our high school students basic statistics. It doesn't have to be a complete class. It can be a 6-week module of a mathematics course. But doing would help us avoid much of the nonsense we read in the papers, hear in the media, and so on, something that has been especially true during this election season.

Take, for instance, the reaction to polls taken after the first presidential debate. Polls by Morning Consult, YouGov, CNN, and Public Policy Polling (PPP) all found that viewers believed Hillary had won the debate. Trump supporters quickly fired back pointing at polls from TIME, the Drudge Report, and others that showed that Trump had won. The difference? The Morning Consult, YouGov, CNN, and PPP polls are scientific polls, while the TIME and Drudge Report polls are not. For example, the latter allow individuals to vote more than once and don't even try to survey a random sample of voters, a condition that is necessary in order for a survey to be reliable. It is instructive that surveys taken later in the week which showed that Hillary enjoyed a 2-3 bounce after the first debate all but confirmed the results of the scientific polls ("Election Update: Early Polls Suggest A Post-Debate Bounce For Clinton").

The idea behind random sampling is fairly straightforward (although it is hard to pull off). If done correctly, everyone has an equal chance of being surveyed. It is similar to stirring a pot of vegetable soup before tasting it. If we stir it adequately, then a spoonful should give us a pretty good idea how the rest of soup tastes. If we don't and all of the vegetables still lie at the bottom of the pot, then a spoonful won't tell us much at all.

Of course, even random samples seldom get it exactly right. However, statisticians have shown through what is known as the central limit theorem that repeated random samples tend to cluster around the correct answer (also known as the population mean), which is why averaging polls can tell us quite a bit about how people are thinking. It also should make us cautious about cherry picking the results of a single survey. Unfortunately, that's what we often do.

All of which brings us back to why we all should teach statistics in high school. Doing so won't entirely cure the human tendency highlight results that confirm our biases. But it may help us be a little more aware of them. And it may help us engage in more meaningful discussions about the world around us.
Posted by Sean F. Everton at 1:25 PM 1 comment: 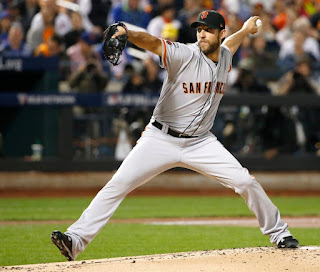 I've ranted about this on so many occasions that I'm beginning to lose count ("Not to Beat a Dead Horse" "The Closer Temptation is Hard to Resist" "MLB's Ridiculous Obsession with Closers" "Not Everyone Can Throw Like Mariano Rivera"), but why do some major league managers insist on pulling their starting pitchers when they're pitching well? Two years ago, the San Francisco Giants were playing the St. Louis Cardinals for a berth in the World Series, and Cardinals manager Mike Matheny pulled Adam Wainwright after 7 innings even though he'd only thrown 97 pitches, hadn't given up a hit since the 4th inning, and didn't come up to bat in the top of the 8th, so the Cards didn't have to pitch hit for him. Nevertheless, Matheny brought in Pat Neshek, who promptly gave up a game tying homer to Michael Morse, and then the Giants won the NL pennant with Travis Ishikawa's walk off HR in the bottom of the 9th.

Tonight's Giants game against the New York Mets was eerily similar. Met's manager Terry Collins removed the Mets starting pitcher, Noah Syndergaard, after 7th innings although he hadn't allowed a run, given up only two hits, had struck out 10, and issued three walks. He had thrown 108 pitches, but he has the entire offseason to rest. And what happened? The Giants loaded the bases in the 8th, but failed to score a run. But in the top of the 9th, Giants third baseman Conor Gillaspie hit a three run HR off Mets closer, Jeurys Familia, to win the game, assuming that the Giants pitcher, Madison Bumgarner would close it out in the 9th, but I doubt there were too many folks watching the game who didn't think he would. Don't believe me? Look at what Gillaspie said after the game regarding his game winning home run:


First of all, in the at-bat I was pretty excited that Syndergaard wasn’t in there. Let’s get that out there first. He had some of the best stuff I’ve ever seen. And as far as the home run, you know what? I’ll be honest with you, I couldn’t tell you where the pitch was at. Right now, I have no idea where it was. I just know it was up enough to swing at.

The bottom line? This is the time of year when managers should let their aces throw complete games. That's what Giants' manger Bruce Bochy did. And that's why the Giants are still in the playoffs and the Mets are not. Not that I'm complaining...
Posted by Sean F. Everton at 10:49 PM No comments: