Things Are Looking Up for Biden and the Democrats 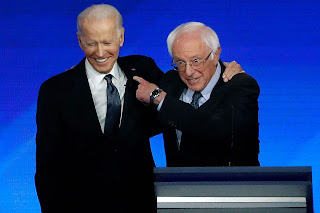 Undoubtedly, numerous factors lie behind Biden's surge. Almost certainly, one is that Democrats are far more motivated to beat Donald Trump this time around than they were in 2016. It's not that most didn't oppose him in 2016; it's just that most didn't think he would win. Another is that Democrats underestimated how much of the electorate (including Democrats) disliked Hillary Clinton. As I pointed out almost four years ago, regardless of who we elected, they were going to be one of the most unpopular President in U.S. history ("Our Next President Will Be Really Unpopular"). Thus, one can't help but wonder what would've happened if Joe Biden had run for President in 2016 and won the Democratic nomination.

He is, of course, running in 2020 and probably will be the Democratic nominee. A few months ago, I wouldn't have given him much of a chance ("Democrats Could Be In Trouble"). As I've noted on several occasions, it's difficult to unseat a sitting President when the economy is doing well. And, up until a month ago, it was. But, with the advent of the coronavirus pandemic, things have changed. We're almost certainly in a recession, and it's likely to last through the end of 2020 and into 2021. And this has thrown the upcoming election's outcome into doubt. Trump is not an idiot (although his opponents like to paint him that way). He knows this is true, which is why he's chomping at the bit to "reopen" the economy. It could backfire, but he intuitively senses that if the economy doesn't reopen soon, his reelection chances are doomed.

To be clear, the state of the economy generally doesn't affect most peoples' votes, but historically it's had a substantial impact on swing voters. Some observers of the political scene believe that given our currently polarized political climate ("Uncivil Agreement: Social Identity and Political Polarization"), the state of the economy will have a smaller impact than it has in the past. Why? Primarily because political polarization has shrunk the number of swing voters in the U.S.

While that's entirely possible and strikes me as actually likely, Biden doesn't have to convince that many swing voters to switch back from Trump to him in order to win the general election. Trump only won Wisconsin, Michigan, and Pennsylvania by a combined 78,000 votes. I'm sorry, but that isn't a lot of votes, so it isn't unreasonable to argue that the current downturn in the economy will substantially hurt Trump's prospects in the Fall. Add to this the fact that Biden is far more popular among rank-and-file Democrats than Hillary ever was back in 2016, and it's hard to deny that things are looking up for Joe (and the Democrats) unless one's burying one's head in the sand. Of course, it's a long time between now and November, and a lot can (and will) happen. But, all things considered, Joe (and the Democrats) should be feeling hopeful.
Posted by Sean F. Everton at 12:20 AM No comments:

Social Distancing Isn't Just About You

Yesterday, we were out for a bike ride and rode past a house where a handful of neighbors were holding a party. Kids were playing basketball in a nearby court, and (we assume) their parents and friends were hanging out in one of the yards. Much to their (we assume) disappointment, two members of the San Jose Police Department had just "joined" the party, informing the partiers that currently such gatherings were verboten. By the time we returned from our bike ride, the party was no longer (or maybe they moved it to someone's back yard).

I'm sure most of those gathered for the party showed up because they weren't worried about becoming infected or too sick if they did. But social distancing isn't just about them. It's also whether they catch it and pass it on to someone who can't fight off the infection. There are numerous stories about people who didn't know they were infected, went to some gathering, and passed it on to someone who then later died.

Don't be one of those persons. This isn't just about you.
Posted by Sean F. Everton at 12:39 PM No comments: