Today, Derek Carr passed Kenny Stabler as the Raiders' all-time passing leader. In the second quarter of today's game against the Chiefs, he completed a pass for a 16-yard gain, which gave him 19,079 career passing yards, putting him past Raiders' legend Kenny Stabler. That's great for Carr, but does anyone seriously believe that he's accomplished more than Kenny Stabler? I hope not. Stabler played for the Raiders from 1971-1979, winning a Super Bowl along the way (1976/77). Carr hasn't come close (not yet, at least). Carr, in fact, has only played 5 full seasons for the Raiders, but somehow he's already surpassed Stabler in total passing yards. What's up?

What's up is how much the game has changed over the years. Rule changes in recent years have helped open up the passing game. For example, in 1978 the NFL freed up receivers by restricting contact beyond 5 yards downfield. At the same time, it permitted offensive linemen to extend their arms and open their hands on pass plays. To give a sense of the impact of the changes, consider that in 1977 the average number of passing yards per game equaled approximately 284 yards per game. By 1980, it climbed to 392! And more changes were implemented in 1994 that helped the passing game (Hail Mary: How 1994’s pass-friendly rule changes saved a moribund league and created the modern NFL).

All of this simply highlights why, in my opinion, it's hard, if not impossible, to compare players across eras. Derek Carr's been good. I'm a fan. But he's not as great as Kenny Stabler (at least not yet).
Posted by Sean F. Everton at 8:52 PM No comments:

Much has been made of the support among Christians for President Trump, in spite of considerable evidence that Trump is anything but devout. However, much of Trump's Christian support comes from white evangelical Protestants, who certainly have not cornered the market on what it means to be a Christian (in spite of what they may claim). Consider, for example, the following graph which plots data collected as part of the 2016 American National Election Study. It indicates that slightly more than half of American Christians (51.54%) voted for Donald Trump, not exactly an overwhelming majority. 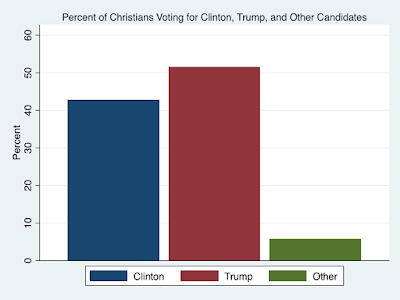 In fact, once you sort Christians into those who live in the South and those who don't, the story gets a bit more interesting (and more nuanced). Although more Christians living outside of the South voted for Trump than they did for Clinton, a higher percentage voted for someone other than Trump (51.24%) than for him. 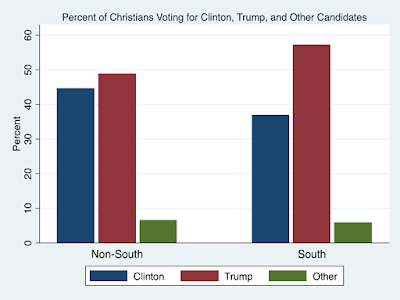 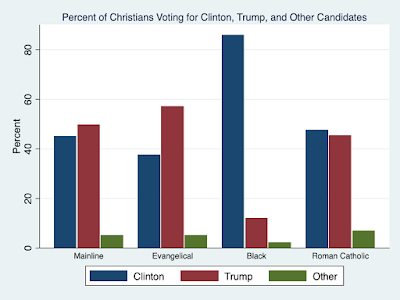 Perhaps, the most surprising result is that more Mainline Protestant Christians voted for Trump than for Clinton. However, when we break the results down between those who don't live in the South and those who do, we can begin to make sense of the results. 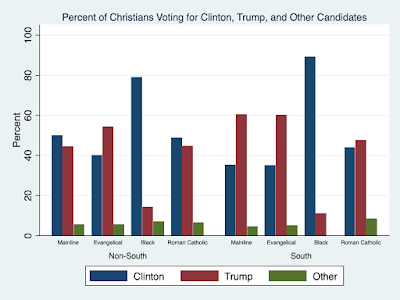 Of course, other factors almost certainly come into play in accounting for who voted for whom, but they don't change the fact that outside of the South, Trump's support among Christians is marginal at best. In fact, it's probably better to argue that Trump is more of a Southern Christian phenomenon than he is a Christian one. That, at least, is my story, and for now I'm sticking to it. 😇
Posted by Sean F. Everton at 11:04 PM No comments: