What Was Hunter Strickland Thinking? 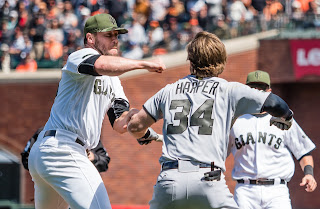 With two outs in the top of the 8th inning of yesterday's game between the Washington Nationals and the San Francisco Giants, Giants reliever Hunter Strickland threw a 98mph fastball at the Nationals' Bryce Harper, hitting him in the hip, apparently in retaliation for Harper's behavior after hitting two home runs of Strickland in the 2014 playoffs. (To be fair, Strickland denies throwing at Harper, but most observers find this hard to believe.) Harper then charged the mound, the two exchanged punches (I think Strickland landed a better right), and both benches emptied. Evidently, this is the first time Strickland has faced Harper since then, so he decided to take advantage of the situation. Who knows? He may not get to face Harper for another 2 1/2 years!

But, what was Strickland thinking? The Giants were losing 2-0 at the time, very much in the game against a team with a sketchy bullpen. It's not as if the Giants are tearing up the league at the moment (at least not in a good way), and they need every win they can get. And true to form, the runner who took Harper's place (he was ejected) eventually scored. The last thing the Giants need right now is to intentionally give other teams opportunities to score. It's telling, I believe, that when Harper charged the mound and both benches emptied, Giants catcher Buster Posey remained out of the fray, possibly a subtle message from the Giants' best player, that Strickland's actions were ill-advised and inappropriate.
Posted by Sean F. Everton at 6:47 PM No comments: 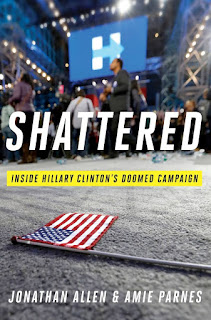 A recently released book, Shattered: Inside Hillary Clinton's Doomed Campaign, purports to explain "why" Hillary Clinton lost the election for president to Donald Trump. As the subtitle suggests, the campaign was doomed from the start. However, even the book's authors (Amie Parnes and Jonathan Allen) were surprised that Hillary lost, which should give readers of the book pause. In fact, as the physicist and sociologist Duncan Watts reminds us in his book, Everything is Obvious (Once You Know the Answer), it's very easy to "predict" the future, once you know what it is.

As I noted in a previous post (For Those Condemned to Study the Past - Whenever Possible, Count!), this is known as hindsight bias, a term coined (I believe) by the social psychologist, Amos Tversk, which (according to Tvesky) is "the tendency [for historians] to take whatever facts they had observed (neglecting the many facts that they did not or could not observe) and make them fit neatly into a confident-sounding story:”


All too often, we find ourselves unable to predict what will happen; yet after the fact we explain what did happen with a great deal of confidence. This “ability” to explain that which we cannot predict, even in the absence of any additional information, represents an important, though subtle flaw in our reasoning. It leads us to believe that there is a less uncertain world than there actually is, and that we are less bright than we actually might be. For if we can explain tomorrow what we cannot predict today, without any added information except the knowledge of the actual outcome, then this outcome must have been determined in advance and we should have been able to predict it. The fact that we couldn’t is taken as an indication of our limited intelligence rather than of the uncertainty that is in the world. All too often, we feel like kicking ourselves for failing to foresee that which later appears inevitable. For all we know, the handwriting might have been on the wall all along. The question is: was the ink invisible?

So, yes, I'm sure that the Clinton campaign made mistakes, but on the other side of the election, I'm willing to bet that they weren't all that obvious, even for Amie Parnes and Jonathan Allen.
Posted by Sean F. Everton at 9:55 PM No comments: 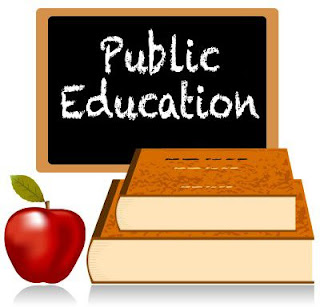 Status reproduction is a process highlighted by the French sociologist, Pierre Bourdieu; it refers to how the status of a person, group, institution, etc. is reproduced by virtue of its status. Consider, for example, college football programs. The best high school players generally want to play for the top programs, which makes it easier for those programs to recruit and attract more of the best players, which in turn helps them remain top programs. This can be true even if they don't have great coaching. Because of the level of talent they attract, they often win in spite of the coaching on the field.

A similar process occurs in many industries. Take the venture capital (VC) industry, for instance. Most entrepreneurs hope to receive funding from top VC firms, not just because these VC firms are seen as being more "wise," but also because their ties with the top attorneys, accountants, and investment bankers raise the probability the entrepreneurial companies will succeed. What this means for VC firms is that the top (i.e., the high status) VC firms often have their "pick" of the entrepreneurial companies to fund, while lower status VC firms do not. Moreover, top VC firms will typically be able to command better terms with their investments, such as getting a larger stake in the start-up's equity. To illustrate, imagine two VC firms, X and Y, with X being a high status firm and Y being a low status one; if both invest $1 million dollars in entrepreneurial company Z, all else being equal, X will get a greater share of the company Z's equity than will Y. Then, if company Z goes public, X will reap higher profits than will X.

What does this have to do with high schools? Status reproduction among them as well. Imagine, for example, two schools: A & B. Available teachers have been randomly assigned to both so that the teaching quality at both schools will be the same. The schools differ, however, in that most of the best students attend A and most of the worst students attend B. It doesn't take a genius to see that school A will score better on various standardized tests, enjoy a higher graduating rate, send more students to college. But it won't do so because of the teaching but because it attracted more of the best students.

To be sure, these two examples are stylized, but they illustrate how school performance is not necessarily an indicator of teacher quality. To be sure, at one time school A may have had some of the best teachers in the district, and that's why it initially attracted better students, but that doesn't mean that it still has the best teachers. Unfortunately, a lot of parents interpret scores and graduation rates in just that way, and consequently (if they possess the requisite resources) they send their kids to schools they think are better but actually might not be. Currently in Silicon Valley, the divide between school A and school B type schools tends to lie between private and public schools, and among public schools, the divide is typically between those in wealthier neighborhoods and poorer neighborhoods.

Divides such as these are almost certainly overstated. My own daughter (Tara) attends a public school (Del Mar) that some folks still see as having a bad reputation. However almost all of her teachers have been excellent, and she has been accepted into the top two public universities in the U.S. (UC Berkeley and UCLA), two of the top regional universities on the West Coast (Chapman and Cal Poly San Louis Obispo), along with UC Santa Barbara, University of Washington, and Sonoma State. In other words, if parents paid less attention to test scores and more to teacher quality, they might realize that their local public high school is probably better than they think it is. Acting on such a realization could save them a lot of money. It would also help boost public schools at a time when they're under attack.
Posted by Sean F. Everton at 1:27 PM No comments: