Our Next President Will Be Really Unpopular

Our next President will be really unpopular. It doesn't matter who wins: Donald Trump or Hillary Clinton. Both have unprecedented unfavorable ratings. In fact, if either one were to run against any recent presidential candidate (winner or loser), they would almost certainly lose. Lucky for them, though (but not necessarily for us), their opponent is almost as or just a little more unpopular than they are. Consider, for instance, the FiveThirtyEight analysis ("Americans’ Distaste For Both Trump And Clinton Is Record-Breaking") that found that Clinton and Trump's "strongly unfavorable" ratings (not their "somewhat unfavorable" ratings) were historically high compared to previous candidates (see the graph below): 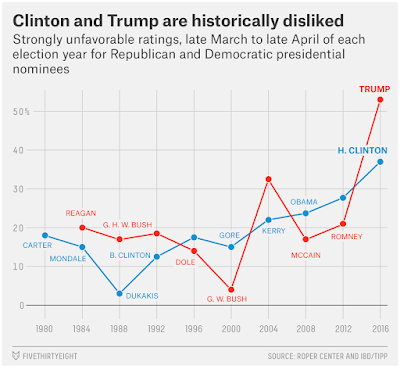 The Economist reached a similar conclusion in its analysis of the two presumptive candidates ("How unpopular are Donald Trump and Hillary Clinton?"):


A glimpse at how the presidential contest is developing was summed up nicely by a recent headline in the Los Angeles Times: “A Trump-Clinton general election poses a question: Which one does America hate less?” The parties’ putative candidates, Hillary Clinton and Donald Trump, are unloved by most voters, consistently chalking up negative favourability ratings this year.

The following chart of net unfavorability ratings pretty much captures how the two contenders stack up against previous years' candidates. 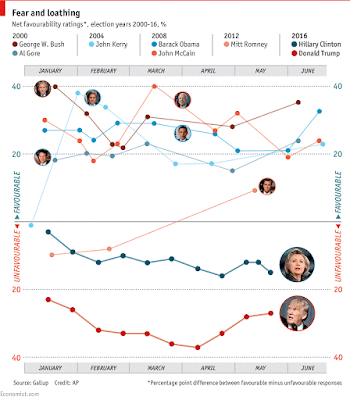 In fact, these ratings are often called "net favorability ratings" because most candidates' favorability ratings outweigh their unfavorability ones. But not this year. No. Both Hillary and Trump are widely disliked by the voting (and non-voting) public, which is why our next President is going to be really unpopular.

The Warriors Need to Find Their Barry Zito 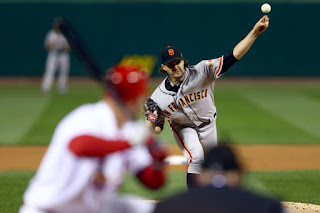 On October 18, 2012, the St. Louis Cardinals beat the San Francisco Giants 8-3 to take a commanding 3-1 lead in the National League Championship Series (NLCS). Things didn't look good for the Giants. The next day the Cardinals were sending All-Star Lance Lynn to the mound, while the Giants were sending Barry Zito, who didn't get out of the 3rd inning against the Cincinnati Reds in the National League Division Series (NLDS) the week before. Zito, however, shocked the baseball world by pitching 7 2/3 shutout innings, the Giants won 5-0, and the Giants went on to win three straight games to win the NLCS. Zito was almost as impressive in the first game of the World Series, out dueling Detroit Tigers' ace, Justin Verlander, as the Giants won the first game of their four game sweep of the Tigers.

It is no secret that Zito struggled during his time with the Giants, and many argued that the 7-year, $126 million contract the Giants signed him to in 2001 was one of the worst ever ("Is Zito's Contract Really One of the Worst Ever?"). However, while it would be hard to argue that Zito's contract was a great deal for the Giants, most Giants' fans probably believe it was worth it ("The Redemption of Barry Zito") for the simple fact that the Giants wouldn't have been World Series champs in 2012 without him.

The Golden State Warriors need to find their Barry Zito. They need someone, who no one expects to step up, to step up and help the Warriors beat the Thunder on Thursday night. I don't know if it will be Ian Clark, Leandro Barbosa, Festus Ezeli, or someone else. But someone needs to step up. The Warriors won't be NBA champs in 2016. But, then again, they may be an odd-year team.
Posted by Sean F. Everton at 11:15 PM No comments: 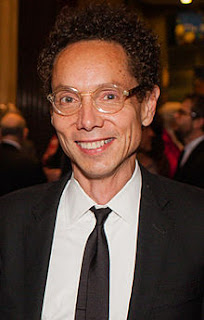 In an earlier post, I've explored Mark Granovetter's theory as to why our weak ties (i.e., our acquaintances) can be "stronger" than our strong ties (i.e., our close friends) ("Weak Ties, Family Ties, and Business Success"). Briefly, Granovetter found that people were far more likely to have used personal contacts in finding their present job than by other means, and of those personal contacts, most were "weak ties." This led him to conclude that when it comes to finding jobs (or gaining access to novel information), our weak ties are often more useful than our strong ties. Why? Because our weak ties are less likely to be socially involved with one another than are our strong ties. Thus, while the information we gain from our strong ties is often redundant, the information we learn from our weak ties is often novel.

One of the clearest explanations of Granovetter's theory appears in Malcolm Gladwell's book, The Tipping Point (pp. 53-54). This is not surprising since Gladwell has a gift for communicating academic research in a manner accessible to the wider public. All of his books (i.e., The Tipping Point, Outliers, Blink, and David and Goliath) include lucid explanations of research (whether it appeared in books or academic journals) that at first glance are impenetrable for non-experts.

Gladwell is featured in a recent Freakonomics podcast ("Being Malcolm Gladwell") that is wonderful. It focuses primarily on his book, Outliers, but regardless of whether you've read the book or not, it is well worth a listen. You can listen to the podcast at the Freakonomics website ("Being Malcolm Gladwell") or download it from iTunes.
Posted by Sean F. Everton at 7:37 PM No comments:

When a Church Leaves a Denomination, Who Gets the Property? 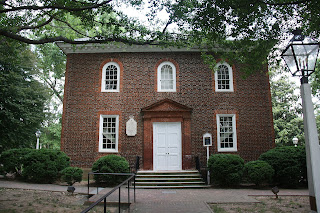 In 2006, following years of conflict over issues such as human sexuality, the role of men and women in ordained ministry, and liturgical reform, a majority (96%) of the members of a local Episcopal church in Falls Church, Virginia, voted to leave the U.S. Episcopal Church but still remain in communion with other Anglican Churches around the world (the parish ultimately joined the Anglican Church in North America in 2013). After a lengthy court battle the church's property was awarded to the national denomination rather than the local church. The court based its decision, in part, on a provision in the national U.S. Episcopal Church's constitution that states that church property belongs to the national denomination not the local church. Interestingly, though, this provision was put into place long after the Falls Church parish was founded in 1732 (and without the assent of the Falls Church congregation). In fact, the Falls Church congregation was founded 50 years before the national Episcopal Church was established in 1789.

Thus, there is an argument to be made that the local congregation had more of a right to the property than did the national denomination, but clearly the Virginia state court did not see it that way. If the Falls Church congregation had been located in another state, it might have won. In fact, state courts are split over this issue.

This is the topic of a recent Research on Religion podcast ("Michael McConnell on Church Property Disputes"). It features professor Michael McConnell of Stanford University, who has recently penned with another professor of law (Luke Goodrich) a law review article on the topic ("On Resolving Church Property Disputes"). Here is a summary of the podcast (from the Research on Religion website):

When a congregation splits from a denomination, what becomes of the church property? More specifically, how have US state courts wrestled with the issue of religious property disputes while trying to preserve the autonomy of church doctrine? Prof. Michael McConnell (Stanford Law School) answers these questions in historical context. He notes how judicial decisions have changed from the traditional “English Rule” favoring hierarchical denominations over congregations, to perspectives that are less intrusive into the internal doctrine and organization of a faith, nothing that there is still a great deal of ambiguity in the law. He argues for an approach known as “strict neutral principles” of resolving property disputes, noting that this mitigates the need for courts to meddle in, or determine, what it proper church doctrine and organization. He contrasts this approach with “hybrid” approaches that oftentimes yield greater uncertainty in ownership and discourage investment. Several examples of actual court cases are referenced throughout the interview.

The podcast can be downloaded from iTunes or listened to at the Research on Religion website ("Michael McConnell on Church Property Disputes").
Posted by Sean F. Everton at 8:54 PM No comments: