Is Kap the Problem? 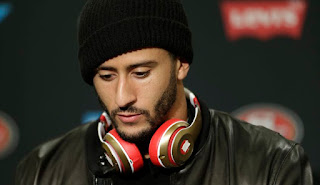 I'm not a huge Colin Kaepernick fan, but as one of the 49er faithful, I've always hoped he'd play well. That clearly isn't happening this season. Some argue that his skills have declined, and that is the likely explanation, but it's also possible that the rest of the league simply adjusted for his strengths, and he hasn't readjusted his game. In other words, if teams were defending him like they did four years ago, he might still be putting up the numbers he did when he first became the Niners' starting quarterback.

If you've been paying attention to the news, you may have heard the rumors that Kap has lost the locker room (i.e., no one respects him anymore), that he's a loner, an island, someone who keeps to himself, wears headphones, and doesn't interact with his teammates. It's unclear the origin of these rumors (both players and coaches insist that they aren't true), but as Tim Kawakami of the San Jose Mercury News pointed out few days ago ("The 49ers’ obvious, unnecessary and repeated contradictions as they move to point all blame to Colin Kaepernick"), the whispering campaign against Kap is eerily similar to that of the one waged last year against then 49er head coach, Jim Harbaugh (he too had lost the locker room, or so we were told). All of which makes you wonder whether the ultimate source of the rumors are 49er owner Jed York and/or 49er general manager Trent Baalke. Kawakami believes that York and Baalke are simply looking for another scapegoat on whom to blame the 49ers woes rather than take responsibility themselves. It's time, as Mark Purdy notes ("49ers headquarters just a big junior high of rumors and gossip"), for York and Baalke to grow up and start acting like adults.
Posted by Sean F. Everton at 8:54 PM No comments:

Just in time for Halloween: Witchcraft and Human Sacrifice 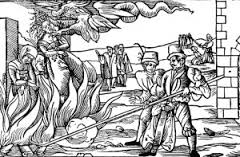 The economist Peter Leeson likes to write on untraditional economic topics: Pirates ("The Invisible Hook: The Hidden Economics of Pirates""An-arrgh-chy: The Law and Economics of Pirate Organization"), Hooligans, Gypsy law, Human sacrifice, and Vermin trials (no, that isn't a misprint). However, as he (and many other economists) point out, economic theory is not only concerned with topics related to the economy, it is interested more generally in how human beings make choices under conditions of constraint and scarcity. That is, when faced with a set of trade-offs (e.g., attending church or going to the beach), what incentives lead them to choose one over another?


Our annual Halloween special takes us back in history to the 16th century when Europe faced a wave of witchcraft trials. To learn why these episodes took place when and where they did, we consult with economist Peter Leeson who enlightens us as to how economics can be used to understand these questions. He also explains the seemingly irrational behavior of human sacrifice in India through the lens of rationality and connects it to an episode that happened in his apartment complex. To find out what that is, you will have to listen.

As in the past, you can download the podcast from iTunes or from the Research on Religion website ("Peter Leeson on Witch Trials and Human Sacrifice"). You will find a more complete description of the podcast there as well, as well as links to Leeson's books and papers and other related podcasts.
Posted by Sean F. Everton at 5:49 PM No comments: 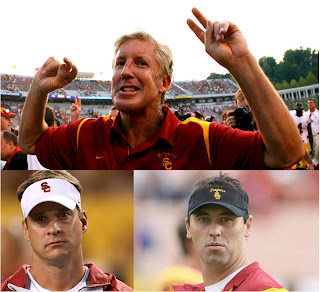 What's wrong with USC football? This year, they were supposed to contend for the Pac12 and nation titles, but instead they will be lucky to qualify for an elite bowl game. The same could also be said for the 2012 season, which they began ranked #1 by the Associated Press but finished unranked, the first team to do so since the 1964 Ole Miss Rebels.

The standard line I hear from USC fans is that its because of the sanctions the program suffered as a result recruiting violations that occurred during Pete Carroll's reign as head coach. As a result, the football team had to vacate its final two wins of its 2004 national championship season (including the national championship), as well as all of its 2005 wins. The team was also banned from bowl games in 2010 and 2011, and it lost 30 scholarships over three years.

Most analysts agree that the sanctions were overly harsh, but is that the reason why USC's football team has fallen on hard times? At first glance, it appears that might indeed be the case. Consider, for example, how its recruiting rankings fell after the sanctions hit (from Scout.com):

As these rankings make clear, beginning in 2012, rather than ranking in the top-10 in recruiting new prospects, USC "fell" 10 slots into "only" the top 20 in terms of recruitment. But now consider the recruiting rankings of its Pac12 rival, Oregon:
Over the same time period Oregon was no more successful in terms of recruiting top prospects than USC, but the Ducks still out-performed the Trojans on the field. Thus, USC fans really shouldn't blame all of the program's problems on the sanctions. They have hurt, but the real problem, in my opinion, is coaching. Pat Haden (and Mike Garrett before him) keep trying to recapture the "glory years" of the Pete Carroll era (which in many ways is stunning considering that Carroll abandoned ship after it became clear the NCAA would sanction the Trojans) by hiring former assistants of Carroll's. They first hired Lane Kiffen, who turned out to be a bust as a head coach, and then they hired Steve Sarkisian, who turned out to have other (and far more serious) issues.

Sarkisian's hiring was possibly the more egregious because after Kiffen was fired in the middle of the 2013 season, assistant coach Ed Orgeron took over and led the team to a 6-2 record over its final 8 games. Haden (and USC) could've hired Orgeron, but unfortunately (at least for USC) he chose Sarkisian, a decision that proved disastrous. To paraphrase the Grail Knight in "Indiana Jones and the Last Crusade," Haden chose poorly. Next time (if there is a next time for Haden), he should choose wisely and pick someone based on their merits, not because they were Pete Carroll's assistant.
Posted by Sean F. Everton at 7:33 PM No comments:

Consider the following letter written in 1956 by a 9-year old girl to President Dwight Eisenhower: 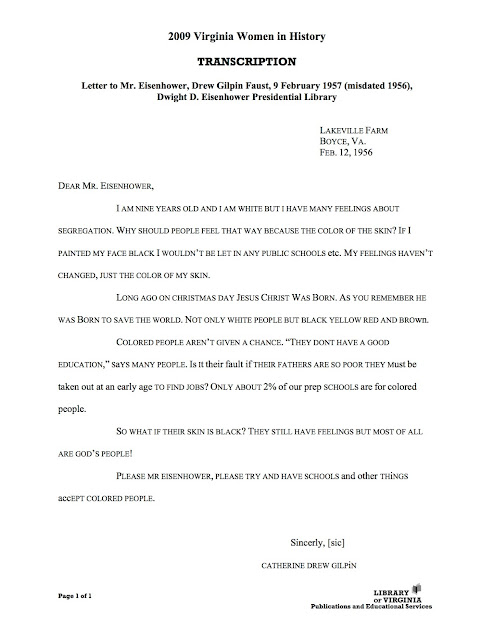 That 9-year old girl is now a President herself. Not of the United States but of Harvard University: Catharine Drew Gilpin Faust is Harvard's 28th President, its first female President, and the first President since 1672 without an undergraduate or graduate degree from Harvard. She was interviewed for a recent Freakonomics podcast, "The President of Harvard Will See You Now," an interview that is is well worth your time. You can listen to the podcast at the Freakonomics website or download it from iTunes.
Posted by Sean F. Everton at 6:48 PM No comments: 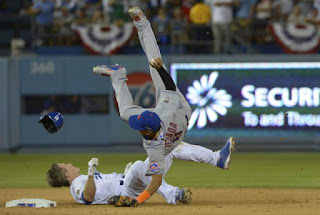 When I first heard about Chase Utley's slide, which broke the leg of Ruben Tejada, the first thing I thought of was when Matt Holiday slid into Marco Scutaro in the 2012 playoffs and provided the Giants with an emotional boost that helped them beat the St. Louis Cardinals in the playoffs and eventually win the World Series championship for the 2nd time in three years. So, my immediate thought was that the Mets had the playoff series against the Dodgers in the bag.

And then I read an article on FiveThirtyEight ("Chase Utley’s Illegal Slide Changed Everything For The Dodgers"), which argued that by taking Tejada out of the series, Utley had substantially improved the Dodgers' chances winning the series against the Mets:

[Utley's] seventh-inning single off Noah Syndergaard increased L.A.’s win probability by 11 percentage points — and by subsequently breaking up a potential Mets double play with his aggressive take-out of Tejada, he lifted the Dodgers’ chances of winning by 40 percentage points. No position player in the playoffs has added more than 28 percentage points to his team’s tally in a single game, so Utley had an enormous individual effect on the outcome of Game 2. And considering that the Dodgers’ odds of winning the series rose from 35 percent to 52 percent with the victory, the slide will probably go down as one of the most pivotal plays of the entire postseason.

It was at this point that the limits of sabermetrics hit me: they simply can't capture the role that emotions can play in a short series. I confess that I'm a big fan of sabermetrics (in fact, I'm currently working on an article using data from Pitchf/x), and they are remarkably accurate over a long season since factors such as emotions tend to even out over the course of a long season. However, in a short series like the playoffs, they can provide a team (like the Mets) with an advantage. To be sure, it is empirically difficult to capture such emotional advantages, but that doesn't mean they aren't real. They are somewhat akin to home field advantage, except that home field advantage can be empirically captured. So, yes, Chase Utley's slide did change everything for the Dodgers -- however, it was for the worse, not the better (unless, of course, you're a Giants' fan).
Posted by Sean F. Everton at 11:00 PM No comments: