Democrats Have Their Work Cut Out for Them 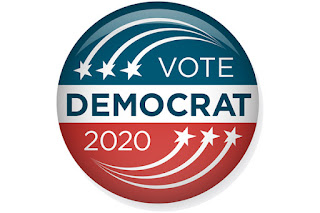 Election night was pretty good for Democrats. They retook the House and will probably flip between 35-40 seats. That will beat the historical average for a party not controlling the White House in the midterm elections. They also picked up at least 7 governorships although they had hoped for 9. It's possible that the governor races in Florida and Georgia will head to a recount, but seldom do recounts change the outcome ("Recounts Rarely Reverse Election Results"). Interestingly, although there are more Republican than Democrat governors, more US citizens will live in a state with a Democrat governor than in one with a Republican governor (if you can't figure out why this is true, then you probably need to revisit what you learned in your 5th or 6th grade math class). Democrats also made impressive gains at the state level, picking up approximately 300 state legislative seats. These gains, along with the gain in governorships, could have major implications for the 2020 elections since district lines are typically drawn by state legislatures.

If there was a disappointing outcome for Democrats, it was in the Senate where it looks like they'll lose at least two seats to Republicans. Although they won at least 23 of the 36 seats up for grabs this year, most of these were seats where Democrats were incumbents. In fact, they had to defend 10 in states that Trump won in 2016, and they lost at least three — and maybe as many as five — of those. The silver lining is that the electoral map will shift in their favor in 2020 when Republicans will have to defend more seats than Democrats. There are three races still to be decided: one in Arizona, one in Florida, and one in Mississippi. Mississippi will almost certainly break for the Republicans, but Arizona may end up in the hands of Democrats. Who knows about Florida. What is it about Florida?

Finally, it's helpful to recall that after Republicans wrested control of both houses of Congress from the Democrats in 1994 (Clinton was President), many assumed that in 1996 Clinton wouldn't be reelected. However, the economy improved and Clinton won a fairly easy reelection over Bob Dole. There's a lesson there. It always is tough to beat an incumbent President and even more so when the economy is strong. Thus, in spite of the fact that the results suggest a switch back to the Democrats in midwestern battleground states ("The 2018 Map Looked A Lot Like 2012 … And That Got Me Thinking About 2020"), it will still take a lot to unseat President Trump if the economy remains strong. It won't be impossible, but in order for that to happen, Democrats have their work cut out for them.
Posted by Sean F. Everton at 5:17 PM 2 comments:

The Election is Looking Good for Both Democrats and Republicans 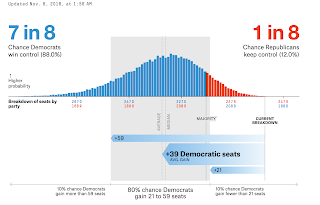 The election's tomorrow, and if we're to believe the polls and prediction markets, Democrats should recapture the House, while the Republicans should hold on to the Senate. FiveThirtyEight's model, which is based largely on polling but includes other factors that tend to influence midterm elections (e.g., which party controls the White House, fundraising, strength of the economy, etc.), places the probability that Democrats win control of the House at around 88% and that the Republicans maintain control of the Senate at around 81%. Prediction markets are a little less sanguine on the Democrats chances. They only give Democrats a 70% chance of winning the House and a 11% chance of  winning the Senate.

Probabilities are just that, however. An 80% chance that something will happen means that given the current conditions (related to whatever event you're considering), 80% of the time the event will occur, but it also means that 20% of the time it won't.

An intriguing question, though, is how this time around pollsters have handled "outliers." Outliers are survey responses that lie outside of the population trend. They can result from chance or measurement error, and they can throw statistical analyses out of kilter. Pick up almost any academic article that employs a form of statistical analysis (e.g., multivariate regression), and there's a strong chance it'll include "robustness" checks that test or control for outliers.

The key, of course, is whether a perceived outlier is actually an outlier or whether it reflects ground truth. Given what happened in 2016, it wouldn't surprise me in the least to learn that pollsters have been a little conservative when encountering results that appear to favor Democrats. That is, because 2016 polls seemed to have underestimated support for Donald Trump, I can imagine pollsters  dropping any "outliers" that seem to overestimate support for Democrats. If this has indeed occurred (and to be clear I have no evidence that it has), it could mean that Democrats might do better in their quest for seats in both House and the Senate than predicted by current models. That would indeed be a surprise. Almost as surprising as the 2016 presidential election (but not quite).
Posted by Sean F. Everton at 11:38 PM No comments: