Deaths of Despair and the Decline in Religious Affiliation 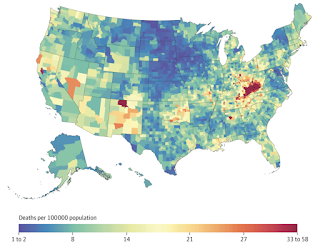 "Deaths of Despair" is a common term for the increasing number of middle-aged white Americans who have been dying from suicide, conditions related to alcoholism, and drug overdoses (e.g., opioids). At the recent meeting for the Association for the Study of Religion, Economics, and Culture (ASREC) in Boston, the economists Daniel Hungerman and Tony Giles of the University of Notre Dame, presented research that explores the relationship between the decline in religious affiliation and deaths of despair ("Opiates of the Masses? Deaths of Despair and the Decline of American Religion"). Like others, they trace the trend back to the early 1990s, thus dismissing the opioid abuse epidemic as a leading cause of the phenomenon, since the drugs central to that epidemic were unavailable 30 years ago. What they found is that the group that has experienced the largest increase in deaths of despair is the same group that has seen the largest decline in religious affiliation over the same time period: middle aged (45-54), non-Hispanic white Americans with no college education. While this group had the lowest levels of non-affiliation before the 1990s, today they have the highest.

Correlation, of course, does not necessarily mean causation, so Hungerman and Giles acknowledge they need to continue their research before it is ready for publication. Yet, they added that they "know of no other large coincidental changes of this kind.” Their initial findings also fit with J.D. Vance's observations in his book, Hillbilly Elegy, on the positive role that religion can play in peoples' lives. In it he laments the decline in church attendance rates among his "hillbilly" peers and notes that communities of faith offered something desperately needed for people like him, growing up in Appalachia:


For alcoholics, it gave them a community of support and a sense that they weren’t fighting addiction alone. For expectant mothers, it offered a free home with job training and parenting classes. When someone needed a job, church friends could either provide one or make introductions. When [my] Dad faced financial troubles, his church banded together and purchased a used car for the family. In the broken world I saw around me — and for the people struggling in that world — religion offered tangible assistance to keep the faithful on track. (pp. 93-94)

That there is positive relationship between religion and health and subjective well-being is well-established in the available research. It has been documented by thousands of studies (that is not a misprint), dating back to the 19th century, that have appeared in the New England Journal of Medicine, the Journal of the American Medical Association, the British Medical Journal, the Journal for the Scientific Study of Religion, the American Journal of Psychiatry, the American Journal of Epidemiology, and so on (for details, see Jeffrey S. Levine. 2016. "'For They Knew Not What It Was": Rethinking the Tacit Narrative History of Religion and Health Research." Journal of Religion and Health 56:28-46.) Thus, the findings of Hungerman and Giles should not come as a surprise. I suspect, though, that for many, especially those who have a mad-on with religion, they do. As I tell my students, however: just because you want something to be true, doesn't mean that it is.
Posted by Sean F. Everton at 2:15 PM No comments:

Comparing the Complexity of Thinking of Believers and Atheists The philosopher John Gray's latest book, "Seven Types of Atheism," caused a minor stir when it was released late last year. Unlike many critiques of atheism, this one comes from within, that is, from a fellow atheist. As the Economist's brief but excellent review of Gray's book ("When Atheists Lack the Courage of Their Convictions") notes, it's one thing when a believer critiques the logic of atheism; quite another when an atheist does:


Alister McGrath’s “The Twilight of Atheism” and Nick Spencer’s “Atheists: The Origin of the Species” are excellent critiques; but both writers are Christians, so they have been relatively easy for unbelievers to dismiss. It has taken a prophet seated firmly in an atheist pew to publicise the creed’s contradictions more widely.

(Never mind that McGrath earned a doctorate in molecular biophysics from Oxford in 1977). But critique it Gray does. He argues, for example, that "While atheists may call themselves freethinkers, for many today atheism is a closed system of thought” (p. 2). As the Economist summarizes:


[Gray] is as exasperated with knee-jerk unbelief as he is with unthinking devotion, and has no time for several of the types of atheism he enumerates. All of them look to replace God with some form of secular humanism, science or politics. Their high priests tend to be just as blinkered as the ecclesiastics they abjure.

Put somewhat differently, many are as dogmatic and "simple-minded" as the believers they often ridicule. Interestingly, a new study by the psychologist Shannon Houck and her colleagues ("An Integrative Complexity Analysis of Religious and Irreligious Thinking") uncovered results that lend support to Gray's critique. Houck et al. used a measure known as integrative complexity (IC) to evaluate complexity of the underlying cognitive structure of the written and spoken languages of religious and irreligious individuals.

They first compared the complexity of the written and spoken communications from several famous religious (Christian) and irreligious person from comparable time periods:
They found that although Christians displayed higher levels of overall complexity, there was enough variability to conclude that the results should not be interpreted to mean that "religious believers are uniformly more complex thinkers than the nonreligious" (p. 5). Instead, the argue that while "it is often assumed that religious persons are very simple thinkers who do not readily recognize alternative viewpoints, our data suggest that this assumption may be inaccurate on the whole. Rather, religious thinkers are sometimes more complex than nonreligious thinkers, and vice versa" (p. 5).

Next, they compared the IC of 37,000 individuals who who voluntarily wrote about the things that matter to them at the website, "This I Believe." They note that while these results "cannot be interpreted directly to mean that religious people are more or less complex... [they] can be directly interpreted to evaluate the degree that persons who spontaneously use religious language are more complex when they discuss their beliefs (as opposed to people who use less religious language)" (p. 5). Consistent with the first part of their study, they found that people who used religious language exhibited higher levels of complexity than those who used less.

Finally, they compared the writings of C.S. Lewis before and after he converted to Christianity. In particular, they examined letters he wrote to one of his friends (Arthur Greeves) when he was still an atheist and those he wrote to him after he became a Christian. Here again, the results are consistent with the previous two. Lewis's writings scored higher in terms of IC after his conversion than they did before.

Although all three aspects of their study found that religious believers exhibited higher levels of complexity than secularists, the authors are quite cautious in interpreting their results. They do not want to suggest that irreligious individuals are simple-minded or that believers always display higher levels of complex thinking. Instead, they argue that their "findings at least suggest that the narrative of the simplifying effects of religion ought to be reconsidered. In the same way that conservatives were once considered more simple-minded, recent evidence calls that into question... these results suggest that perhaps religious persons are also not as simplistic as once believed" (p. 9).

I'd also add that their results suggest that perhaps irreligious persons are also not as complex in their thinking as many like to believe they are.
Posted by Sean F. Everton at 11:08 PM No comments:

Why Checking Bags Ought to Be Free 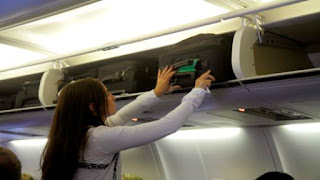 I'm not a frequent traveler, but I'm not an infrequent one either, and it's been hard not to notice that airlines often struggle with boarding. A lot of the time the cause appears to be carry-on baggage. Often there is not enough room for all the bags brought on board (and sometimes they don't fit), so the the airlines are forced to check bags at the gate (and sometimes after people have already boarded).

Many airlines offer to check the bags for free at the gate, but this strikes me as using incentives backwards. Checking a bag when checking in should be free and having to check a bag at the gate should not, rather than the other way around. This would lead to less bag checking at the gate and quicker boarding times. Because more bags will be checked under such a system, the airlines might need to raise ticket prices a bit, but in my book, it would be worth it.
Posted by Sean F. Everton at 1:34 PM No comments: