Stealing Signs, Bobby Thomson, and the Shot Heard Round the World 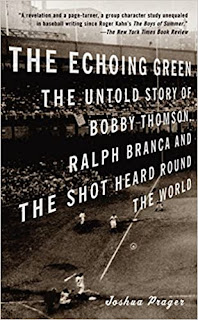 “The tradition of professional baseball is agreeably free of chivalry. The rule is, “Do anything you can get away with.”” - Heywood Broun, 1923


A few months ago when reflecting on the 2017 Astros' sign-stealing scandal ("Some Thoughts on Stealing Signs in Baseball"), I noted that a certain level of cheating is expected and even tolerated in professional sports. The key, of course, is never getting caught. I also mentioned how under manager Leo Durocher, the NY Giants stole signs using a telescope located in the center field clubhouse during the latter part of the 1951 season. When they began doing so on the 20th of July, the Giants trailed the Brooklyn Dodgers by 7 1/2 games. They fell behind as far as 13 1/2 games (on August 11th) before going on a winning streak (37 of their last 44) that helped them catch the Dodgers and force a three game playoff. The teams split the first two games, and in the bottom of the 9th of the 3rd game, with the Giants trailing 4-2, Bobby Thomson hit perhaps the most famous home run in MLB baseball history: His three-run walk-off homer off of Dodger pitcher Ralph Branca, known as “The Shot Heard 'Round the World.” You can see a clip of Thomson's HR at the end of the post, with Russ Hodges calling the shot.

All this is detailed in Joshua Prager's 2006 book, “The Echoing Green,” which expanded upon his 2001 Wall Street Journal article, ("Was the '51 Giants Comeback a Miracle, Or Did They Simply Steal the Pennant?"). Coach Herman Franks, who operated the telescope, relayed the stolen signs to both the Giants dugout and bullpen via a buzzer wire. The Giants eventually settled on signaling the batter from the bullpen, which was located in right field, where backup catcher Sal Yvars tossed a ball in the air for a breaking ball and held on to it for a fastball. In 1949 two Washington Post reporters estimated that, on average, just under 12 seconds elapsed from the time the catcher signaled to when the pitcher released the ball. Plenty enough time for Franks to push the buzzer and Yvars to relay the sign. All right-handed batters had to do was take a quick glance at the bullpen to get the sign. They didn't even have to step out of the batter's box. 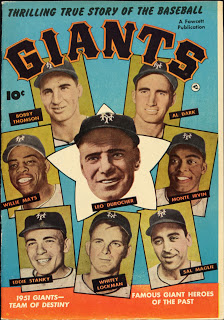 Rumors that the Giants’ had stolen signs using a telescope spread throughout baseball in the '50s. Branca, who had been traded to Detroit, first learned of it in 1954 from his roommate, who knew someone from the Giants who told him about it. Branca called Yvars a few days later, and Yvars admitted that it had happened. Then in 1962, Washington Senator and former Giant, Danny O’Connell, told a reporter (Joe Reichler) that the Giants had stolen catchers’ signs in the last few months of the '51 season, but the story didn't gain much purchase. When asked, Thomson denied it, and Branca remarked that although he'd known about it for years, he'd hadn't said anything because he didn't want to sound like a sore loser. It really wasn't until Prager's 2001 article when several 1951 Giants players (including Willie Mays) publicly admitted to the sign-stealing scheme that people actually began to believe it was true.

That said, in 1951 stealing signs using telescopes and binoculars was not uncommon. Nor was it against the rules. In 1962 Hall of Famer Rogers Hornsby wrote that “every team with a scoreboard in center field has a spy to inside one time or another.” The White Sox installed a system in the 1950s that reportedly was still in use two decades later, and it was based on a system the Red Sox had installed at Fenway before that. In fact, it wasn't until the 1962 season that using mechanical devices to steal signs was strictly forbidden (it probably wasn't a coincidence that the 1961 National League champions, the Cincinnati Reds, were accused of using a telescope to steal signs), but it's unclear how much of a deterrent the new rule was. Think Astros 2017 (and if you believe that no team illegally stole signs between 1962 and 2017, then I have some land south of Florida that I'd like to sell you).

Using optical devices to steal signs dates back at least to 1899 when the Phillies used opera glasses to steal signs from the top floor of a three story building that overlooked the centerfield wall. That year the Phillies finished with a record of 94-58, quite an improvement over the previous year when they finished 78-71 but not enough to win the pennant (they finished in 3rd place).

The '51 Giants already had a sophisticated method for stealing signs in place before they began using a telescope. They noticed that catchers tended to be a bit careless with runners on first, so once a runner reached first, he would begin signaling the sequence of signs to someone in the dugout, who would then study and eventually decipher the pattern. Once the signs were known, whenever runners reached second, they'd relay the signs to the batter.

Some Giants’ players didn’t want to know what pitch was coming, believing they hit better just reacting to a pitch. Thomson was not one of those. He wanted to know the signs, but he repeatedly denied looking at Yvars prior to hitting his home run off of Branca. However, Giants' coach Herman Franks later told Prager (after his book was published) that he saw Thomson glance toward the right-field bullpen before Branca's fateful pitch.

The electrician who set up the buzzer for picking off catchers' signs was a devoted Dodgers’ fan, but he worked night games at the Polo Grounds. Late in the 1951 season he was struck by stomach cancer and as the season wound down, he listened to games on the radio horrified at what he had helped wrought. He passed away on November 3, 1951, exactly one month after Thomson's home run. 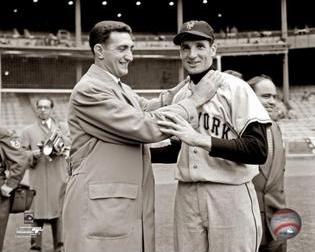 Branca attended the 6th game of the World Series, and agreed to be photographed "choking" Bobby Thomson. And four months later Branca and Thomson sang together at the Baseball Writers Association of America annual dinner, to the tune of "Because of You," which was made famous by Tony Bennett, whose "I Left My Heart in San Francisco" is currently played after every San Francisco Giants win (how's that for a coincidence?). Each sang a version of the song with lyrics specially written for each of them. Branca, who was actually a great singer, brought many in the crowd to tears. Not too long afterward, they sang again on Ed Sullivan's variety show, "The Toast of the Town" (later known as "The Ed Sullivan Show"). In time, Branca and Thomson became something of an act, appearing on television and at events where they'd sign baseballs, posters, etc. and occasionally sing. They even became friends although Thomson's early denials angered Branca for some time.

Other facts included in the book:

The Pandemic and the Social Capital of Local Neighborhoods 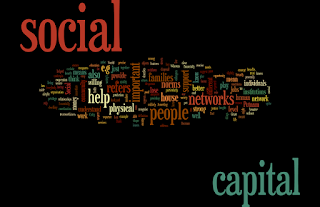 While biking on local trails early in the pandemic, I mused that people seemed "nicer" and hoped that one of the pandemic's long-term benefits that it would help bring Americans together after years of political polarization ("People Seem Nicer"). Unfortunately, some of our leaders (one in particular) have used the pandemic to divide us even more than we were before. Still, I have hope. I have hope because anecdotal evidence suggests that "social capital" may be on the rise in many of our local neighborhoods. If so, this could signal a reversal of several decades of decline, at least according to the political scientist Robert Putnam ("Bowling Alone").

What's social capital? It is generally thought to be the quantity and quality of resources that we can access through our various social networks. By social networks I do not mean social media outlets such as Facebook or Twitter, but rather the connections we share with our friends, family, co-workers, and so on (Note: the analysis of social networks dates back at least to the 1930s, long before Facebook was a twinkle in Mark Zuckerberg's eye -- see Freeman 2004). Social capital is generally seen as a function of the number of ties (i.e., connections) we have with others AND the level of trust present in those ties. Put differently, the more ties of trust that we have (and continue to invest in), the greater our social capital.

Of course, anecdotal evidence is only that. We can't know that such activities are systematically happening across the U.S. (and the world) without better data, which we won't have for a few years. However, if it is happening, then maybe, just maybe, we'll emerge from this pandemic with resources that we can use to "rebuild" the U.S. from the bottom (neighborhood) up into a less polarizing society. We can only hope.

Freeman, Linton C. 2004. The Development of Social Network Analysis: A Study in the Sociology of Science. Vancouver, Canada: Empirical Press.