The Upswing: Robert Putnam and Shaylyn Garrett Offer Hope on Getting Back to "We" 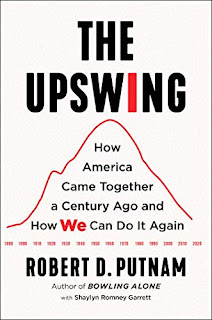 Back in the summer, I reviewed Tara Burton's book, Strange Rites, in which she argues that people in general, and millennials in particular, are not so much abandoning religion as remixing it. They are trading in institutional religion for what Burton calls "intuitional" religion: namely, "narratives that simultaneously reject clear-cut creedal metaphysical doctrines and institutional hierarchies and place the locus of authority on people's experiential emotions" (p. 33). Moreover, she highlights how although the spiritual individualism of these intuitional faiths is often couched in the language of "self-care," it is often quite selfish.

We can place Burton's observations within a broader context outlined by Robert Putnam and Shaylyn Garrett in their recent book, The Upswing: How America Came Together a Century Ago and How We Can Do It Again. Briefly, Putnam and Garrett argue that over the last 125 years, the United States has moved from being an "I" to a "we" and back to an "I" society. They harness a wide variety of data which shows that the U.S. grew increasingly "egalitarian, cooperative, cohesive, and altruistic" (p. 11) from 1890 (the tail end of the Gilded Age) to the mid-1960s, but then it began to reverse itself and become increasing individualistic. "Between the mid-1960s and today... we have been experiencing declining economic equality, the deterioration of compromise in the public square, a fraying of social fabric, and a descent into cultural narcissism" (p. 11). The two figures below, from pages 10 (Figure 1:1) and 13 (Figure 1:2) of their book, capture their basic argument:

The one on the left plots aggregated measures of economic equality, political cooperation, social cohesion, and notions of individualism vs. community in American culture. The figure on the right combines these four measures into a single plot, which they refer to as the 'I-we-I' curve: "a gradual climb into greater interdependence and cooperation, followed by a steep descent into greater independence and egoism. It has been reflected in our experience of equality, our expression of democracy, our stock of social capital, our cultural identity, and our shared understanding of what this nation is about" (pp 12-13).
Putnam and Garrett explore religious adherence in their chapter on "isolation and solidarity" (Chapter 5). Using church membership data from the Historical Statistics of the United States and the Yearbook of American Churches, they show that church membership rates rose from less than 50% in 1890 to around 80% in the early 1960s after which it began to drop such that by 2017, it was back around 50%. Church membership data aren't exact (e.g., Roger Finke and Rodney Stark estimate that the church "adherence" rate peaked in 1980 and held steady until 2000), so they supplement it with church attendance and affiliation survey data. Much like Tara Burton, they conclude that the "religious 'we' [has] given way to the religious 'I'." (p. 138).
Perhaps more importantly, though, they locate this decline along side other measures of declining solidarity. They show that it isn't just churches that are experiencing membership declines, but so are civic associations and unions. Philanthropy has also declined steadily since the mid-1960s, although giving by the mega-rich has increased (a situation not unlike the Gilded Age), but not nearly at a rate high enough to offset the general decline. Drawing on several measures, they also show that the family as an institution also began to decline in 1960s. In other words, it isn't just that the "religious 'we' [has] given way to the religious 'I'." It is also true that the institutional "we" that has given way to the intuitional "I."
Putnam and Garrett are careful to distinguish the virtues of solidarity and community from the stifling conformity that so many rebelled against in the 1960s:

[The] reformers of the 1960s had good reasons for seeking to expand individual rights. Indeed, so much was achieved and set in motion in the realm of personal rights in the 1960s that it might be hard not to look at that decade as a time when the yoke of repression and conformity was finally broken, individuals were freed to be who they wanted to be, and American was held account for its failings in guaranteeing liberty and equality under the law. However... the net effect of these progressive and forward-thinking movements was... to emphasize individualism and individual rights at the expense of widely shared communitarian values. The movements of the 1960s to "liberate" individuals in many cases had the unintended side effect of elevating selfishness...

The solution to hyper-individualism is never hyper-communitarianism, nor a repudiation of equally important American values such as liberty and self-determination. For solutions to be long-lasting and to hold widespread appeal, they must respect the full range of American ideals. (p. 313, 337)

Putnam and Garrett are not the first to document (and lament) America's increasing individualism. Putnam, himself, took up the subject in his "Bowling Alone" article (1995) and book (2001), and Robert Bellah and his colleagues explored it in "Habits of the Heart" (1985) and "The Good Society" (1992).

Here, however, Putnam and Garrett offer a sliver of hope that we can reverse our hyper-individualism, just as we did back in the 1890s. In fact, they hold up the Progressive Era, which roughly dates from 1890 to 1915, as something from which we can learn and adapt. Although it was flawed (e.g., racism was the norm among progressives back then), we can still look back to "better understand [how] the mind-set, tools, and tactics employed by early-century reformers may inform and empower us to overcome the drift of our own time, achieve our own form of mastery, and ultimately reverse our course to create a new chapter in the American story" (p. 339).
Posted by Sean F. Everton at 6:22 PM No comments: