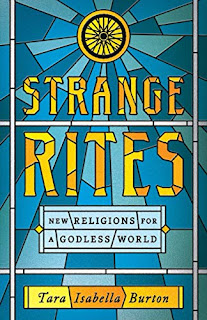 In her fascinating survey of our so-called secular world ("Strange Rites: New Religions for a Godless World"), Tara Burton argues that people in general, and millennials in particular, are not so much abandoning religion as remixing it. "Shaped by the twin forces of a creative-communicative internet and consumer capitalism," they are rejecting "authority, institution, creed, and moral universalism" in favor of "intuition, personal feeling, and experiences" (p. 10). They are trading in institutional religion for what Burton calls "intuitional" religion: namely, "narratives that simultaneously reject clear-cut creedal metaphysical doctrines and institutional hierarchies and place the locus of authority on people's experiential emotions... The Remixed demand agency and creative ownership in their spiritual lives, dissatisfied with the narrowness of the options available." (p. 33). She argues that Americans, and especially millennials

envision themselves as creators of their own bespoke religions, mixing and matching spiritual and aesthetic and experiential and philosophical traditions. The Remixed hunger for the same things human beings have always longed for: a sense of meaning in the world and personal purpose within that meaning, a community to share that experience with, and rituals to bring the power of that experience into achievable, everyday life. But they're doing it differently. (Or, at least, they think they are). (p. 10)

Many of the Remixed faiths can be found leaning toward the political left: for example, the gospel of wellness and its focus on self-care; the sexual utopias of polyamorists and kinksters; contemporary occultism and other New Age spiritualities; and social justice culture and its eschatological vision of a better world. Others are not, however. Silicon Valley's transhumanist techno-utopianism is "gleefully libertarian, comfortably capitalist, and antiauthoritarian" (p. 189). And then there is the Nietzschean-inspired atavistic authoritarianism of the alt-right, the manosphere, and some followers of the psychologist Jordon Peterson, who "see in today's contemporary intuitional religions a feminized weakness that only a cult of authoritarian masculinity can fill." (p. 206). Among the latter are what Burton calls "nihilistic atavists," those who mourn "the loss of a once-great masculine civilization but see no way forward except for total social collapse" (p. 206).

But, should we consider all of these religions? Not all embrace metaphysical beliefs; some are quite secular, in fact. However, as Rodney Stark and William Bainbridge have noted, it is not uncommon for secular movements to take on metaphysical trappings and evolve into bonafide religions with their own narratives and shared rituals. Scientology and Transcendental Meditation, both of which began as self-help therapies or practices, are two such examples. This is not a concern of Burton, however. She draws on a Durkheimian understanding of religion, one that does not require that adherents hold a belief in a God or supernatural force, and argues that today's Remixed religions are religions in the sense that they provide followers with four key aspects of religion: "meaning, purpose, community, and ritual." (p. 29) Take, for instance, social justice culture:

It has done what so much of anodyne, classical liberalism has failed to do. It has imbued the secular sphere with meaning. It has reenchanted a godless world... Like its Marxists antecedents, [it] has managed to create a thoroughly compelling, eschatologically focused account of a meaningful world, in which every human being has a fundamental purpose in a cosmic struggle... To dismiss it as silly or jejune is to profoundly overlook what it reveals about the American search for meaning and about the spiritual hunger of those who subscribe to it. (p. 177)

She notes that it weaves together the basic tenets of intuitionalism into a narrative that explains the world in which we live and promises an eschatological future in which all will be well (p. 178). It also excommunicates heretics who are insufficiently "woke," as well as calling-out outsiders for offensive statements or behavior. Such actions not only maintain the movement's purity, but they provide followers with collective rituals that reaffirm their inclusion in a moral community. "Call-out culture persists not merely because there are plenty of people out there who deserve to be cancelled, but also because the sense of community it provides to its participants, the fantasy of moral solidarity, is a potent draw" (p. 188). And then there are the safe spaces, areas or rooms set aside for protecting the experiences of the marginalized:

The cloister of the self space doubles as a moral hermitage: a place where those who utilize it can be guaranteed not only to find like-minded members but also to reify their own commitment to that space, its values, and ideals. To willingly enter a safe space is not just to withdraw from the real world, but to enter a quasi-sacred one, in which social justice's narrative of the self, society, and truth reign supreme. A space, you might say, not unlike a church." (p. 188)

Burton contends that social justice culture, techno-utopianism, and atavistic authoritarianism are all vying to become America's new civil religion. "All three... claim a powerful, transformative vision of the world, rooted not in transcendent meaning but in human thought, feeling and will... Only time will tell which one will win" (p. 246).

She takes care to point out that many of today's Remixed faiths are not as new as some of their adherents believe. Deism, Theosophy, John Humphrey Noyes's Christian Perfectionism, Phineas Quimby's New Thought, and Transcendentalism are examples of early American intuitional religions. And trading in old faiths for new ones is hardly new. As Stark and Bainbridge pointed out 35 years ago, people seldom stop believing; instead, they tend to trade their beliefs in for “newer” or “different” ones ("The Persistence of Belief, Part I: The Future of Religion"). They empirically demonstrated that there is a strong inverse correlation between church membership rates and participation in untraditional forms of belief (at least untraditional in the U.S.) such as Yoga, Transcendental Meditation, Scientology, Astrology, and so on.

Burton (pp., 18-25) estimates about 50% of Americans count among the Remixed, hailing primarily from three groups of "believers": The spiritual but not religious (SBNRs), who make up about 27% of Americans; the faithful Nones, the 18% of Americans who don't belong to a religious community or claim a religious identity but still believe in a higher power; and the religious hybrids, the 21% of Americans who say they belong, believe, and/or practice a given religion but jettison those elements of it they don't like or supplement it with beliefs and practices from other traditions.

What's the future of Remixed religion? Burton believes that unlike in times past, it may be here to stay, given the pervasiveness of the internet and consumer capitalism. And since coronavirus pandemic has pushed most of us even more online, one could argue that intuitional faiths are better positioned to survive the pandemic than are institutional ones. Still, the pandemic has also highlighted how much we crave face-to-face interactions, something that many Remixed faiths do not offer, so there may be hope for institutional religions after all. Moreover, cultural evolutionists argue ("The Persistence of Belief, Part III: Religion is Good for the Group") that evolutionary pressures tend to favor "Big God" religions that promote solidarity, reduce intragroup competition, and enhance intergroup competitiveness by encouraging prosocial behavior, such as keeping selfishness in check. Burton repeatedly highlights how the spiritual individualism of many Remixed faiths, which is often couched in the language of "self-care," is often highly selfish. Thus, it's not unreasonable to wonder just how long their shelf life might actually be.
Posted by Sean F. Everton at 5:04 PM