The Persistence of Belief, Part I: The Future of Religion 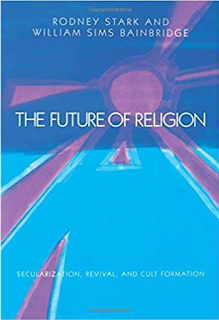 And if you're wondering, unaffiliated European display similar patterns. Over half of Western Europeans surveyed in 2008 who reported no religious affiliation affirmed at least one of the following statements:

This should not come as a surprise. Research has found that novel (or deviant) forms of belief tend to thrive in those areas where more traditional forms are weak. As Rodney Stark and William Bainbridge pointed out back in 1985, seldom do people stop believing; instead, they tend to trade their beliefs in for “newer” or “different” ones. And they showed that there is a strong correlation between church membership rates and participation in untraditional forms of belief (at least untraditional in the U.S.) such as Yoga, Transcendental Meditation, Scientology, Astrology, and so on.

Subsequently, one of Stark's students, Christopher Bader, used Yellow Page advertisements to develop a rate of astrology studies for each of the 50 U.S. states. And when compared with state adherence rates, it exhibits a strong negative correlation. The figure below presents this graphically where the map on the left plots the adherence rate by state, while the map on the right plots the astrology rate by state. The darker the shade of blue, the higher the rate. In general, where church adherence rates are high (e.g., Louisiana), astrology rates low, but where church membership rates are low (e.g., Alaska), astrology rates are high. 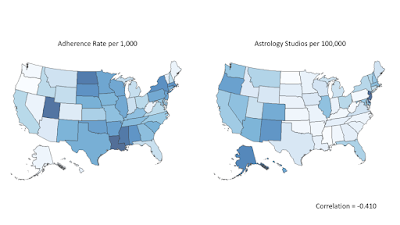 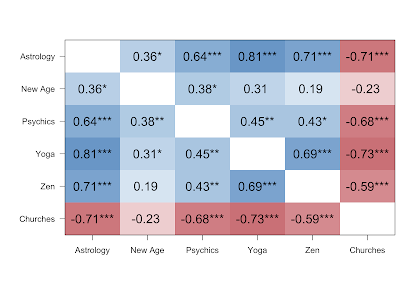 In short, belief in something beyond the everyday is quite common. In fact, one could argue it is the norm. The question is why? It is not, as some would have us believe, due to a lack of education or a better understanding of science, nor simply because it offers comfort in the face of a meaningless universe ("Stephen Hawking and the Questions Science Can (and Cannot) Answer"). As Darwin, himself, noted it appears that religion’s appeal is rooted much deeper in our evolutionary history.


Nor must we overlook the probability of the constant inculcation in a belief in God on the minds of children producing so strong and perhaps an inherited effect on their brains not yet fully developed, that it would be as difficult for them to throw off their belief in God, as for a monkey to throw off its instinctive fear and hatred of a snake.

At least three streams of thought inform the current debate about what evolutionary processes played a part. One, which is associated with cognitive scientists of religion, argues that religion is “natural” in the sense that it is an accidental byproduct of a separate (but adaptive) evolutionary process ("The Persistence of Belief, Part II: Religion is a Natural Accident"). A second, which draws primarily on the work of group or cultural evolutionists who contend that religion, or at least some forms of it, have helped human groups to adapt to various evolutionary pressures ("The Persistence of Belief, Part III: Religion is Good for the Group"). The third reflects the efforts of philosopher Stephen Asma, who argues that religion persists because it is good for us because it helps us manage and regulate our emotions ("The Persistence of Belief, Part IV: Religion is Good for Us"). All three of these explanations are not entirely incompatible with one another, but it is helpful to consider them as analytically distinct and examine their arguments separately. That's the purpose of three soon to follow posts.
Posted by Sean F. Everton at 7:16 PM