The 12 Days of Christmas Begin Today (or Tomorrow) 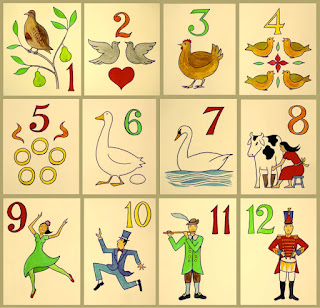 This is my annual reminder that the 12 Days of Christmas are not the 12 days prior to (and including) Christmas Day, but the 12 days after, running from either December 25th to January 5th or from December 26th to January 6th, depending to which tradition one follows. Either way, the 12 days end on Epiphany (January 6th), which is when the wise men present gifts to the infant Jesus, he may have been as old as 2-years when they finally track him down.


Needless to say, when most of us think about "The 12 Days of Christmas," we're thinking about the song. The song's origins are unclear, but one story, which has little historical support but's fun to consider, claims that the song originated as a Roman Catholic "Catechism Song" during a time when Catholicism was "strongly discouraged" in England (1558-1829):
For a more scholarly take on the song's origins (but far less entertaining), see the Wikipedia article.

Note: If you add up the number of gifts for each of the twelve days -- one for the first day, three (1 + 2) for the second, six (1 + 2 + 3) for the third, and so on -- you get 364, which is the total number of days in the year if you don't count Christmas. I learned this from watching a Hallmark movie (yes, I confess that I watch Hallmark Christmas movies).
Posted by Sean F. Everton at 12:33 AM