The Persistence of Belief, Part II: Religion is a Natural Accident 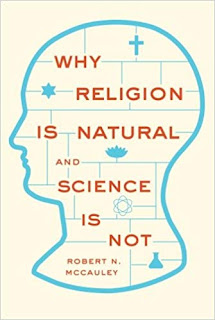 Religion is a Natural Accident

In a highly influential essay, evolutionary biologists Stephen J. Gould and Richard Lewontin called traits or characteristics that are byproducts of the evolution of other characteristics, rather than the direct product of adaptive selection, “spandrels.” They borrowed the term from architecture which refers to the V-shaped space formed between two arches. Gould and Lewontin noted that artists often fill such spandrels with paintings or other decorations, but the spandrels are not created for the paintings themselves. Instead, they are byproducts or “accidents” of architectural design. They do not serve a purpose but exist solely because two arches align with one another. Another example of a “spandrel” is the triangular space that is created when staircases are built Such spaces are often filled with closets or cupboards, but they were not constructed in order to create a cupboard or closet. Instead, they are spandrels, or byproducts, resulting from the construction of staircases.

Following Gould and Lewontin, most cognitive scientists of religion (CSRs) consider religious belief be a spandrel, an evolutionary accident that developed alongside one or more “adaptive” characteristics. Most begin with the idea that religious belief is intuitive, that it is cognitively natural, and they draw on cognitive science in order to explain why. By “natural” they do not mean that we are hardwired for religion and that everyone, or at least anyone who is “normal,” is religious. In fact, several CSRs are openly hostile to religion and see cognitive science as a means for explaining religion away. By natural, rather, CSRs have in mind behaviors and thought processes that come easily to us and require little conscious effort on our part.

Robert McCauley has identified two ways in which naturalness can occur. One, which he calls practiced naturalness, comes about through repeated practice and training, such as how we learn to ride a bicycle or break 90 on a golf course. The other, which he calls maturational naturalness, occurs as we mature, such as how we learn to walk or to speak the common language of those around us. Of course, there are some things that come naturally appear to include a little bit of both, such as literacy, which takes both a knowledge of a language but also instruction and practice.

With regards to religion, CSRs argue that religious belief and practice is a natural outcome of the developmental process. The question is, “why?” CSRs do not entirely agree, but many begin with our tendency to attribute agency to ambiguous events. Most CSRs trace this to evolutionary processes to “better be safe than sorry” strategies for dealing with an unknown and hostile world. As the sociologist Christian Smith puts it, "In a hunt-and-be-hunted world in which one may easily become another animal’s next meal, to suspect that unusual objects and movements in one’s environment may be an agent (e.g., a big, predatory cat or a poisonous snake) is a cautious strategy than enhances one’s survival prospects, even when most unusual indicators are not agents." Justin Barrett refers to this as our “hypersensitive agent detection device (HADD),” a term and acronym that has caught on among CSRs. And from there it was only a short step to attributing ambiguous evidence to the agency of superhuman powers.

Another possible contributing factor is what Paul Bloom calls common-sense dualism, which is our tendency to think of bodies and souls as distinct entities. He sees religion as a byproduct “of the fact that we have two distinct cognitive systems, one for dealing with material objects, the other for social entities.” CSRs often refer to these systems as “folk physics” and “folk psychology,” which they see as our our intuitive and automatic understandings of how the world works. Bloom argues that because we see bodies and minds as existing separately, it is not too difficult to imagine one existing without the other. Not only does this make it easy for us to believe in life after death (i.e., souls continuing on without their bodies), it makes it easy for us to believe in God.

Another factor may be our tendency, from a very young age, to think teleologically. We look for and assign meaning and purpose to everyday events. Deborah Keleman has experimentally documented this phenomenon, which she calls, “promiscuous teleology.” As Justin Barrett notes, "preschoolers are inclined to see the world as purposefully designed and tend to see an intelligent, intentional agent as behind this natural design." In other words, our tendency to believe in a God, gods, or supernatural force is not a product of socialization but rather something that develops naturally as part of our cognitive development.

All of this raises the issue as to why after gaining a foothold, religious beliefs continued to persist. CSRs posit at least two possible reasons: One draws on the work of cultural evolutionists (see the next post) and argue that religion, or at least some religions, hold beliefs that enhance a group’s ability to adapt to its environment and thus make it more likely to survive the evolutionary process of natural selection. A second reason is the notion that once they arise, religious concepts are more likely to persist if they strike a balance between naturalness and unnaturalness. The former makes them believable, while the latter makes them memorable. Put somewhat differently, they need to be counterintuitive enough to stand out, but they cannot deviate so far from societal norms that they are incomprehensible; they need to be, as M. Afzal Upal puts it, “minimally counterintuitive” (MCI).

Justin Barrett agrees that MCI beliefs are well suited for surviving evolutionary pressures, but he also believes that highly counterintuitive beliefs can persist if they construct and maintain what he calls, “cultural scaffolding,” that is, those “special artifacts, institutions, practices [and] other devices that help people learn and use these more complex concepts." They are the “extra structures [that] are needed to build up some ideas or practices that are not particularly natural.” What types of scaffolding are needed? Most obviously, ritual and worship, but that is probably not enough:


Successful theological traditions have developed [the] cultural scaffolding to make complex ideas more accessible. A portion of religious activities includes teaching, preaching, or instructive components in which religious ideas are communicated. These institutionalized practices are one part of the cultural scaffolding. Likewise the use of written texts (scripture) and sermons, common features in many religions, is the clearest example of cultural scaffolding that aid in transmitting relatively unnatural theological ideas. (Barrett 2011:141)

In other words, successful religions must put into place practices that help make complex beliefs more understandable and transmittable.

Although this post does not do justice to the argument as to why CSRs believe that religious beliefs and practices are natural, I think it captures the basic contours of their argument or at least those aspects of it on which most CSR's agree. The figure below attempts to graphically sketch their perspective:

As noted above, a number of CSRs use cognitive science to explain away religion, as do some of the so-called “New Atheists.” such as Richard Dawkins and Daniel Dennett. Not all CSRs agree, however. Justin Barrett, for instance, is a committed Christian and has written extensively on the compatibility of the cognitive science of religion with religious belief and practice. And others have noted that it does not follow that a particular phenomenon is false just because its natural causes have been identified. As the late (and atheist) philosopher J. L. Mackie once remarked, “no account of the origin of a belief can settle the question of whether that belief is true or not.” The Oxford philosopher, Guy Kahane, makes a similar point: “the mere fact that there is a causal explanation of belief does nothing to effect its justification. All beliefs have a causal explanation” (including, one might add, atheistic beliefs). In fact, the psychologist James Jones argues that “if a set of beliefs does perform the functions it was designed for, that certainly counts in favor of its truthfulness." Moreover, we cannot know that they evolved only for survival and reproduction. They could have also evolved for other purposes:

While survival and reproduction are crucial to the species, from the beginning hominids have made music, created art, engaged in ritual and religious practice. Whatever their evolutionary trajectory, and that is lost to us, there is no reason not to see them being as much a part of our early heritage as sex and gathering food. They are not hijacks on our basic nature, they are part of our basic nature. (Jones 2016:126)

Religion's adaptive value is indeed the focus of Steven Asma's recent book, Why We Need Religion, which will be the subject of a future post. Stay tuned.

Gould, Stephen Jay, and Richard C. Lewontin. 1979. "The Spandrels of San Marco and the Panglossian Paradigm: A Critique of the Adaptationist Programme." Proceedings of the Royal Society of London B205(1161):581-98.

Keleman, Deborah. 1999b. "Why Are Rocks Pointy? Children’s Preference For Teleological Explanations of the Natural World." Developmental Psychology 35:1440-53.

McCauley, Robert. 2011. Why Religion is Natural and Science is Not. Oxford: Oxford University Press.

Smith, Christian S. 2017. Religion: What it Is, How it Works, and Why It Matters. Princeton, NJ: Princeton University Press.