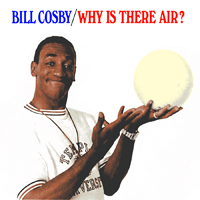 The sentencing of Bill Cosby for indecent assault for 3-10 years was a stark reminder of how far the former comedian and television star had fallen. I grew up listening to his comedy records: Bill Cosby is a Very Funny Fellow...Right!, I Started Out as a Child, Why is There Air?, and Sports. It didn't matter how many times I listened to them, I always laughed at his sketches about "Noah," "Neanderthal Man," "Street Football," "Rigor Mortis," "Driving in San Francisco," "Track and Field" (High School and Mile Relay), and so on.

And like most Americans in the 1980s, I made a point to flip on the TV when The Cosby Show aired. After so many years, it's easy to forget that it upended a number of stereotypes. At the time some criticized the show for not being more explicit about civil rights, but I've always thought that by portraying a middle-class Black family where the lead characters were an attorney and a doctor, and the kids aspired to attend college, The Cosby Show shattered the stereotypes that many people had about African-Americans. And that's nothing to sneeze at.

Thus, along with many others, I lament Cosby's fall. Not that I don't believe the charges against him. I do. It's just hard to get my head around how someone who did so much good, could also do so much bad.
Posted by Sean F. Everton at 2:31 PM No comments:

Do Umpires Favor the Home Team?

So, I've been playing around with the pitch locations and related umpire calls in order to see if there's a umpire bias. Here, I'm just looking at home vs. visiting team, and it is only one game. Still it is interesting. The first graph is for the visiting team's pitcher, Dereck Rodriguez ("Pudge" Rodriguez's son), while the second is the home team's pitcher, German Marquez (from last night's game between the Giants and Rockies). The pitch locations are for called strikes and balls -- in other words, pitches at which the batter didn't swing, so the umpire had to decide whether the pitch is a strike or a ball.

There's a statistical test for this, but a quick glance suggests that the home team received better calls than the home team did. This, of course, is only one game, so we shouldn't generalize. I will return in a later post with a more substantive analysis that will examine umpire patterns for all of major league baseball, dating back until 2008. I first need to figure out how to store all that data, however.
Posted by Sean F. Everton at 4:01 PM No comments:

Here's One Giants' Fan Who's Rooting for the A's

A few years back someone who worked for me asked if I was gearing up for the big rivalry games that coming weekend. "Who's playing?," I asked. "A's and Giants", my friend said. "You're kidding, right?," I replied, "The A's aren't the Giants' rivals. The Dodgers are." And so it is. While it's true that when the Giants and A's play one another, I pull for the Giants, the reason why I don't consider the A's the Giants rivals is because when the Giants aren't playing the A's, I'm usually pulling for the A's. That's not true for the Dodgers. It's a very rare day when I pull for the Dodgers -- in fact, it's only when a Dodger win will benefit the Giants. Someone far wiser than I once stated that they had two favorite teams. The Giants and whatever team's currently playing the Dodgers. I couldn't agree more (in other words, I was a Mets fan today).

If you find this weird, blame my parents. They raised me to root for ALL of the Bay Area teams: the Giants, A's, Niners, Raiders, Warriors, and all the local universities: Santa Clara, Stanford, Cal, San Jose State, St. Mary's, and so on.

In other words, I'm really happy that the A's will probably reach the playoffs this year, and I sure hope they beat the Yanks in the play-in game (just like they did today). To be sure, when Bay Area teams play one another, I pull for my favorites (e.g., Giants over A's, Niners over Raiders), but don't confuse a "favorite" with a "rival." They're not the same. At least not in my book.
Posted by Sean F. Everton at 8:58 PM No comments: