A Benedict Option for Progressive Christians? 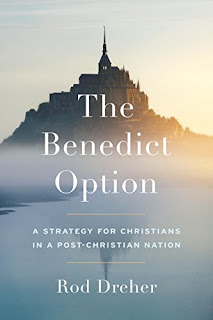 A couple of years ago, I wrote a post about the Benedict Option ("A Benedict Option?"), which is a movement associated with the Crunch Con, Rob Dreher. Briefly, it takes its inspiration from the final paragraph of the philosopher Alasdair McIntyre's magisterial book, After Virtue, in which he argues that the only way to sustain a coherent moral culture in the modern world is to build “local forms of community within which civility and the intellectual and moral life can be sustained.” McIntyre speculates that the preservation of today's civilization may depend upon the emergence of “another—doubtless very different—St. Benedict” who can create local communities similar to those of Benedict's that sustained civilization and moral life through the so-called Dark Ages.

As Dreher imagines it, the Benedict Option entails a partial withdrawal by traditional Christians from the political sphere. They would still voice their opinion on public issues but no longer seek to play key roles in presidential politics. It would require “a radical shift in perspective among Christians," one in which they see themselves "as living in ruins (though very comfortable ones!) of Christian civilization.” Their task would be to keep “orthodox Christianity alive in the hearts and minds of believers, living as exiles in an ever more hostile culture,” and would be “primarily a theological and cultural project” based on radically rethinking of their place in the world.

Most associate the movement with political conservatism, but Dreher is no fan of our current President, and as I have noted elsewhere ("Geniuses for Jesus (Updated)") although McIntyre is no longer a Marxist, his take on economic issues places him closer to Karl than it does to Adam Smith. Consequently, I can't help but wonder if the Benedict Option could function as a "model" of sorts for progressive Christian congregations. It's no secret that Mainline Protestantism is struggling in terms of attracting and retaining adherents (although many Mainline executives remain in denial -- see "Mainline Denial Redux"), thus instead of worrying about church growth (and decline), perhaps Mainline congregations can focus instead on forming communities in which a robust theological, moral, and intellectual life can flourish, with the hope that they can sustain both their members and surrounding communities through our current "dark" age. As the theologian Stanley Hauerwas has argued, the decline of the Mainline may be good for it. It may help it recover the core of the Gospel, one that preaches and lives Jesus's radical vision for our world.
Posted by Sean F. Everton at 12:51 PM No comments: 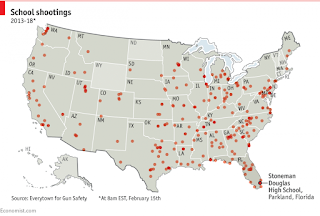 Another day and another school shooting. What else can be said? I think the Economist's headline from today ("America Seems Unable to Solve a Scourge that Exists Nowhere Else: There is Nothing Surprising in this Article, Unfortunately") pretty much captures it all (see its graphic to the right). School shootings may not be a regular occurrence in the U.S., but they happen at a rate that one might expect to find in a Third World country and not in one of the most developed countries in the world.

Of course, schools aren't the only place in the U.S. where shootings take place. In fact, we have a mass shooting almost daily:


By the reckoning of the Gun Violence Archive, the killing in Florida was the country’s 1,607th mass shooting since Sandy Hook. In other words, America has had more than one mass shooting every day since then, costing 1,846 lives. (The database includes mass woundings in its count, which is why the numbers of mass shootings and killings are roughly even.)

Unfortunately, many of our politicians seem to have little motivation to address the problem. Some want to blame it on poor mental health, apparently arguing that Americans, on average, are not as mentally stable as are individuals from other countries. The data, however, simply don't support such a conclusion. Other developed countries with similar mental health levels have much lower rates of gun violence:


The toll of gun violence in other rich countries, with comparable health indicators, is negligible by comparison. America’s gun-related murder rate is 25 times higher than a group of 22 other developed countries, according to the American Journal of Medicine. This is mainly because America has so many more guns than those other countries. It has less than 5% of the world’s population and almost half of the world’s civilian-owned firearms.

25 times higher. That's stunning. It's alarming. It's scary (or, at least it should be). No doubt, some will argue that it's just another example of fake news, but just because we don't like a fact, doesn't mean that it's untrue. In fact, refusing to acknowledge that gun violence is an uniquely American problem strike's me, as someone else once remarked, as a way that some can continue to pretend that by doing nothing, somehow the problem will go away (never mind that such a strategy has yet to work). That, my friends, is magical thinking, and if you ask me, a sign of poor mental health.
Posted by Sean F. Everton at 10:43 PM No comments: 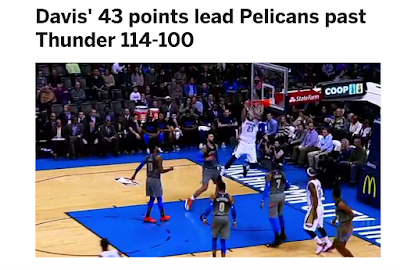 What's wrong with the above headline (aside from the fact that it's great that the Thunder lost)? More precisely, what's wrong with that headline's punctuation? It should read, "Davis's 43 points lead Pelicans past Thunder 114-100," not "Davis' 43 points lead Pelicans past Thunder 114-100." Why? Because Davis is singular, not plural, and the possessive singular that ends in "s" should be followed by an apostrophe and then an "s." As Strunk and White note in their classic book on grammar, The Elements of Style (p. 1), we should follow this rule "whatever the final consonant." For example we should write,

Are Strunk and White alone in making this argument? No. As the authors of Grammar Smart note (p. 122), "If the word is a proper noun that ends in -s, add an apostrophe and an -s. (This is the part that people get wrong)

And aside from a few exceptions, the Chicago Manual of Style and the Associated Press agree ("Apostrophe-S vs. Apostrophe: Forming Possessives of Words Ending in S (or an S Sound)"). Still skeptical? Consider the following "real life" examples from a wide-range of authors and topics, updated from an earlier post:


Johann Arnason has pointed out that Jaspers's "most condensed statement" of the axial age, describing it as the moment when "man becomes conscious of Being as a whole, of himself and his limitations," and "experiences absoluteness in the depths of selfhood and in the lucidity of transcendence," is remarkably similar to Jaspers's own version of existential philosophy.

Anyone who chooses to believe something contrary to evidence that an overwhelming majority of people find overwhelmingly convincing... will not be convince... And so, with this book, I do not expect to convince anyone in that boat. What I do hope is to convince genuine seekers who really want to know how we know that Jesus did exist, as virtually every scholar of antiquity, of biblical studies, of classics, and of Christian origins in this country and, in fact, in the Western world agrees. Many of these scholars have no vested interest in the matter. As it turns out, I myself do not either. I am not a Christian, and I have no interest in promoting a Christian cause or a Christian agenda. I am an agnostic with atheist leanings, and my life and views of the world would be approximately the same whether or note Jesus existed. My beliefs would vary little. The answer to the question of Jesus's historical existence will not make me more or less happy, content, hopeful, likable, rich, famous, or immortal.

I plunge into a maze of cobbled alleys and mews cottages that once comprised the Circus's outstation for Covert Operations -- or in the parlance, simply Marylebone.

There are plenty of more examples, which surely these should suffice. I suspect not, however, and that I am titling at windmills.
Posted by Sean F. Everton at 10:41 AM No comments: