One Thing Liberals Can Thank Trump For 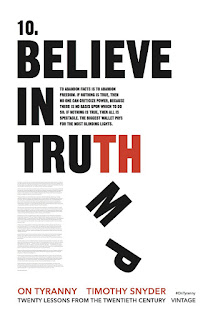 I know, I dangled a preposition in the title, but there's actually something political liberals should thank President Trump for.1 For the first time in a long time we don't seem to be afraid about talking about "truth." For too long we've been enamored with postmodernist notions of moral relativism, but we finally seem to be okay with the idea that not all news is "fake news," that "facts" do exist, and that not all of reality is socially constructed ("The Social Construction of Reality (Sort of)." This shift was brought home to me while reading Timothy Snyder's, On Tyranny, which contains 20 "lessons" on how to prevent the U.S. from devolving into tyranny. The tenth lesson is entitled, "Believe in Truth," in which Snyder argues that

This does not mean that our perceptions of reality aren't colored by our social location, but it does suggest that lying behind those perceptions is a reality, a truth, that we can catch a glimpse of from time to time, and our goal should be to adopt methods for capturing that reality. So, let's thank our President for bringing us face-to-face with the fact that there really are facts. It's one of the few positive things he has wrought in the few short months he has been in the White House.

1 There I go again, but phrasing it that way makes a lot more sense than saying, "there's something for which political liberals should thank Trump." Undoubtedly, that is why Winston Churchill once remarked, “This is the sort of bloody nonsense up with which I will not put.”
Posted by Sean F. Everton at 12:13 AM No comments:

Why We Coffee Drinkers Should Thank Starbucks 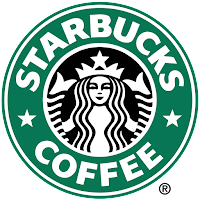 I'm sensing that it's becoming increasingly fashionable to "dis" Starbucks. Starbucks coffee is bland, it has no bite, it's become a corporate behemoth, so we should support the local coffee house instead. All that may be true, but for those of us old enough to remember, before Starbucks (and Peet's), it was hard to find a good latte. Local coffee roasters routinely burned the milk when steaming, and the beans they ground were often little better than Folgers.

But the advent of Starbucks brought consistency to the making of lattes, cappuccinos, and so on. This forced local roasters to improve what they served, or they'd go out of business (and many did). That's why most of the baristas working in coffee shops today know how to brew an excellent cup of coffee. And that is why all of us coffee drinkers should thank Starbucks (and Peet's).
Posted by Sean F. Everton at 9:56 AM 1 comment:

Should the Giants Panic? 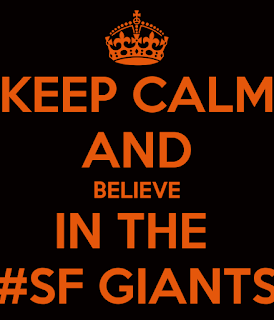 Four years ago, almost to the day, the Giants were struggling, and I wrote that they Giants shouldn't panic ("Why the Giants Shouldn't Panic"). Most of their struggles could be explained by injuries (primarily to Angel Pagan) and a bit of bad luck. In retrospect, I look like a genius since the next year the Giants went on to win their third World Series in five years.

So, what about this season? Should they panic? I don't think so. This season has been characterized by injuries to key players (Posey, Bumgarner, Crawford, Pence, Cueto, Melancon) and sub-par years from Crawford, Belt, and Pence. Pence's off year could reflect that he's getting older ("Aging Curves and Big Contract"), but there's a good chance that Belt and Crawford will bounce back next year. In fact, I'm convinced that Crawford is playing with an undisclosed injury -- he hasn't been the same since he returned from the DL. Belt's more of a mystery. His defense is as good as anyone's in the league and a key reason why Crawford and Panik won Gold Gloves last year, but he never seems to hit as well as expected, which is why the Giants might be tempted to shop him in the off season. Indeed, doing so may help them shore up the few holes that they have. Here's my mild prescription for the Giants woes:
Then, of course, there's the issue with Pablo. Three years ago I expressed skepticism about his long-term worth ("Aging Curves and Big Contract"). He was past the age that most major league baseball players begin to decline (which were reflected in his own output), and he seems to have difficulty keeping himself in shape, which only will accelerate his decline. That said, the Giants are basically getting him for free right now, so why not give him a tryout over the next couple of months. He has an incredible amount of raw talent ("Pablo, You Could've Been One of the Best"), so it may be worth seeing if he can turn it around.

I think that's about it. The Giants shouldn't panic. They have the best catcher and perhaps the best big-game pitcher in baseball. They just need a couple of players to bounce back from off years, pick up a power hitter, and find someone to replace Matt Moore. Piece of cake. And let's not forget. Next year is an even year.
Posted by Sean F. Everton at 10:50 PM 1 comment: