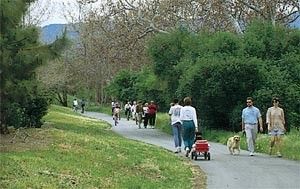 With the "shelter in place" in effect, I've been biking a lot on local trails and streets. And people seem nicer. Cars stop to let bikes cross (what were once) busy streets, and people seem more willing to make room for people to pass. Of course, the latter could simply be people seeking to maintain a safe social distance, but people also greeting random others with a smile and well wishes. To be sure, there've been a few "Lord of the Flies" moments, such as people fighting over household goods at Costco, and then there were those folks waiting in long lines to stock up on guns and ammo. Not sure I want to know what they think they're preparing for. Still, although my bike-riding experiences don't constitute a random sample, I'd like to think (hope?) that they reflect the fact that people are acting nicer.

This has made me wonder if one long-term benefit of the coronavirus pandemic may be that it helps bring us together after years of political polarization. It won't happen overnight. Although Trump cleverly exploited it to win the 2016 election, the divide that separates us has been with us for some time. The political scientist, Liliana Mason, traces it back to at least 1972 (Uncivil Agreement: How Politics Became Our Identity"). And there's plenty of blame to go around. Some point to the racially-tinged southern strategy of Richard Nixon and Barry Goldwater's as a cause, but as the political scientist, Mark Lilla, points out, liberals have also been complicit ("The Once and Future Liberal: After Identity Politics"). Regardless of the causes, we have sorted ourselves into competing tribes or teams that often appear more interested in winning than in doing what's good for the nation as a whole.

Nevertheless, people who study our tribal tendencies also point out that when divided groups are presented with a superordinate task, they often put their differences aside and band together. And I wonder if, perhaps, coming together to tackle the coronavirus might just be the superordinate task that does it for us. There are some, however, who argue that it will have just the opposite effect, exacerbating other divides, in particular those defined by race, class, and age: "Slurs against Asian Americans. Jokes about baby boomers dying. And blue-collar workers’ plight is nothing like the 'work from home' lifestyle" (see "Covid-19 Is Becoming the Disease That Divides Use"). I'm hoping I'm right and they're wrong. People really do seem nicer.
Posted by Sean F. Everton at 6:35 PM