How Will The Giants Do This Season? (If There is One) 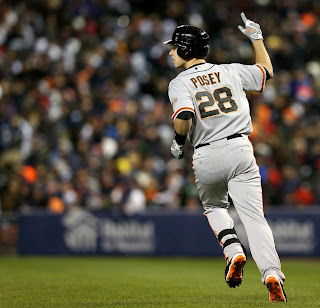 How will the Giants do this season? I asked the same question last year ("How Will the Giants do in 2019?"), and my answer was that they would probably do better than many expected. I anticipated Belt, Crawford, Longoria, Panik, and Posey all to have decent years, and except for Longoria, none of the them really did. And by late May, I was calling for a rebuild ("Should the Giants Pull the Plug?" "Retool or Rebuild: A Choice, Not a Question").

Then, the performance of a few new players, such as Kevin Pillar, Mike Yastrzemski, Donovan Solano, and Alex Dickerson, plus the revival of Pablo Sandoval, altered the landscape. The Giants started winning, and rather than dealing Madison Bumgarner at the trade deadline, they held on to him, hoping they could make a run at the playoffs. They didn't, but at 77-85, they finished better than preseason projections (73-89 per PECOTA, and 71-91 per 538). So, I guess I was right after all (albeit for all the wrong reasons).

I'm pretty much taking the same position this season. Currently PECOTA projects the Giants to win 68 games (538 has yet to release theirs), but I believe they will win more than that. I do think Posey will have a better year than last; he seems to be healthy, and he's been hitting with more authority this Spring training. Additionally, it looks like Crawford and Belt will be platooned this year, splitting their time with the likes of Marcio Dubon, Wilmer Flores, Donovan Solano, and Yolmer Sánchez, which should improve their numbers relative to plate appearances, as well as the Giants overall numbers at short and first. In the outfield we have Yaz and Dickerson coming back, and Hunter Pence (yea!) will probably platoon with the latter. That's a pretty good combination. Austin Slater showed promise last year, as did Jaylin Davis, so our outfield may be okay. Rumor has it that Marcio Dubon will be spending time in the outfield too.

Pitching could be a major problem. No MadBum, and Tyler Beede, probably our best pitching prospect, has arm problems, and it's unclear when he'll be back. It'll be up to Johnny Cueto and Jeff Samardzija to have better than expected seasons if the Giants hope to be competitive. Who knows how the rest of the rotation will fare. That, I think, is the Giants' biggest uncertainty. And then there's the bullpen. More uncertainty. Tyler Rogers could turn out to be a good closer, and we do have Tony Watson returning. The bullpen may turn out better than it appears at first blush. Only time will tell.

I do anticipate the Giants acquiring players that turn out to be pleasant surprises. Farhan Zaidi is doing with the Giants what he did with the Dodgers. Picking players off a waivers, signing unheralded free agents, and trading for players other teams want to unload, and then giving them a shot. And while most don't pan out, some do. Think Justin Turner or Chris Taylor. We need to find players like them (Darin Ruf?).

And then there's Joey Bart. The Giants number one prospect. He'll almost certainly be pulled up to the majors this year, which means that Buster will see more time at 1st base. The Giants have a few more prospects that may not be too far from making their major league debuts either: Sean Hjell, the 6'11" pitcher who had a pretty good Spring training, and Heliot Ramos, who hit a massive home run in Spring training and is only 20 years old.

So, how will we do? I say we will win about as many games as last year. However, if Beede gets healthy, and Joey Bart makes even more of splash than anticipated, we might surprise a few people. I doubt that we'll reach the playoffs, but the second half of the season may prove entertaining and we could be pretty well set up for 2021 (perhaps, we'll start talking about the magic of "odd years" in the future).
Posted by Sean F. Everton at 7:02 PM