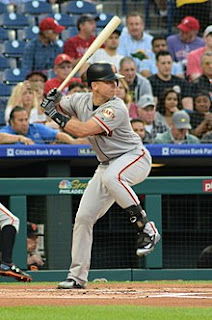 Shortly before the beginning of the baseball season, a friend asked how I thought the Giants would do. I said that I thought they would be better than most experts were predicting, but it would take career hitting years from most of their core (Posey, Panik, Crawford, Belt, and Longoria) or a big year from a rookie (e.g., Duggar) for them to make the playoffs. The Giants have decent starting pitching, great defense, and apparently the best bullpen in MLB, but if they don't hit, it could be a long year.


So far, members of the core aren't even hitting close to their career averages, let alone having career years, which is why they are currently 5 games below .500. It is likely that Posey, Panik, Crawford, Belt, and Longoria will break out of their current slumps and their output will begin to get back to where it belongs (Posey and Belt are showing signs of life; hopefully, the others will soon follow suit). If that happens, then there's a good chance that they will be better than the experts think. However, I think we Giants fans will have to wait another year before we make a run at the playoffs. This is one of those times when I really want to be wrong. For Bruce Bochy's sake, I hope I am.
Posted by Sean F. Everton at 4:50 PM