Democrats Could Be In Trouble 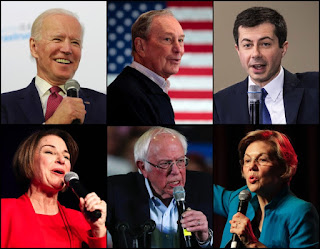 Democrats could be in big trouble. Donald Trump is one of the most unpopular presidents in US history, but if the economy remains strong, they will have a hard time beating him in November. They still might win the popular vote, but winning the electoral college might be a bridge too far.

Making matters more difficult, they could nominate someone who has little to no chance of winning. Among the candidates on the left, Bernie Sanders seems to have the best chance of securing the nomination, and while I personally like him ("Bernie Sanders and Civil Discourse"), I'm skeptical that he'll attract enough moderate voters to win. (I actually have imagined one scenario in which he can win, but that's for a future post.) Among the moderates, Mayor Pete's my favorite ("Pete Buttegieg Won't Save American Christianity, But He'll Probably Help It") and I think Amy Klobuchar would do well, but Joe Biden and Mike Bloomberg probably have the best chance of beating Trump. However, the former appears like he has little or nothing left in the tank, and the latter has to show that he can do more than produce slick (albeit impressive) campaign ads.

The Democrats best hope might be for the economy to tank. Pointing out that the current economic expansion began under Obama will have little effect. Nevertheless, the economy will stop expanding at some point. There's always a recession in the future when you're in the midst of an expansion. But predicting when that will happen is anyone's guess. If it begins in the next couple of months, then the Democrats' chances will improve substantially, regardless of who's nominated. But if it doesn't begin until the late Fall (or after), it will probably be too late.

Does this mean Democrats should just give up? Of course not. Who knows what might happen. The one thing they have going for them is Trump's unpopularity and what political scientists call "party fatigue." Party fatigue occurs when voters grow tired of a particular party being in power and vote for the party out of power. It is possible that as disruptive as Trump's presidency has been with its daily tweets and mercurial behavior, enough voters will simply have had enough and swing the election to whomever the Democratic nominee is.
Posted by Sean F. Everton at 6:23 PM