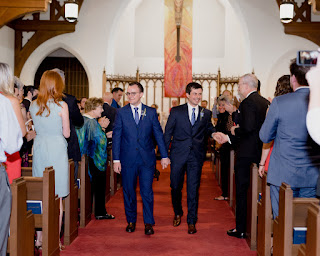 Back when we lived in Bend, Oregon, in the 1990s, a proposition qualified for the state ballot that would've have limited the rights of gays and lesbians, and the "mainline" Bend ministerial association decided to put together a pamphlet opposing it. When I received a draft, I looked it over, thought it was fine, and passed it on to to the Associate Minister of the local United Methodist Church. After he read it, he handed it back to me and remarked, "There's nothing remotely Christian about this." And he was right. There were references to Franklin and Jefferson, but there was nothing about Jesus, which strikes me as bit odd if not sad. Buddhists routinely cite the Buddha, Muslims frequently quote the Prophet, but theologically-liberal Christians seem reluctant, almost embarrassed, to talk about Jesus. Perhaps it's because we're afraid of what others might think. Remember how the media sneered at George W. Bush who, after being asked who is favorite philosopher was, replied, "Jesus."? Such reluctance has led me to quip on more than one occasion that "we liberal Christians are more likely to quote Jefferson than we are Jesus."

This is too bad because so many Americans have absolutely no idea that not every one who calls him or herself a Christian believes God helped elect Donald Trump to make America great again. Instead, many of us consider Trump to be amoral at best and find the repeated attempts by some Christians to explain away his behavior as theologically troubling. But it's more than troubling. Explaining (or rationalizing) away Trump's behavior calls into question the very legitimacy of the Church. If Trump's behavior is fine, then what's "appropriate? It's no wonder that so many young Americans feel disaffected from the church.

And that's where Pete Buttegieg comes in. He's a theologically-liberal Christian who isn't afraid to talk about Jesus. As the Economist recently noted, he happily fuses liberalism with tradition. If asked, I don't know if he would name Jesus as his favorite philosopher, but it wouldn't surprise me if he did. And that, I think, is a good thing. More Americans need to know that not all Christians believe Trump's the greatest thing since sliced bread. In fact, many of us count ourselves among the majority of Americans who did not vote for him, think he's morally challenged, and is not making America great again. At best, he's turned us into a laughing stock. And while I don't think Mayor Pete will "save" the church, he'll almost certainly improve the perceptions that many people have of it.