The Economic Divide (Why Do So Many Christians Support Trump?, Part IV) 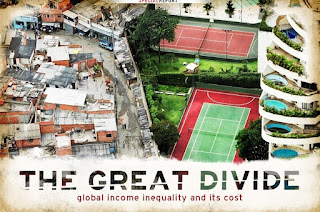 The economic divide is another factor that may help explain why such a large proportion of white Christians voted for Donald Trump ("Why Do So Many Christians Support Trump? (Part I)"). Sometimes referred to as the "left-behind" thesis, it overlaps somewhat with the urban-rural divide ("The Rural-Urban Divide (Why Do So Many Christians Support Trump?, Part III)"). It argues that Trump attracted a large proportion of working class voters who had fallen behind economically and felt abandoned by the Democratic party. Much of Trump's support came from blue collar workers (especially men) without a college degree, who felt that they've been treated unfairly, that they no longer have a shot at the American Dream.
The sociologist Arlie Hochschild ("Strangers in Their Own Land") captures this sense with the "deep story" she crafted to help explain why many of those who live in one of our nation's poorest and most polluted states (Louisiana) continue to vote for candidates who resist federal aid and oppose regulating industries that damaged the communities in which they live. Specifically, she asks us to

imagine waiting in a line at the end of which lies the American Dream. However, not only are we waiting in line, but we've been waiting in line for a very long time. And while we've been waiting, people have been cutting (unfairly) into the line ahead of us, and they aren't doing it by themselves. They're getting help. In particular, they're getting help from the government, usually the federal government. Moreover, there are others (many of whom have already reached the end of the line and are openly contemptuous of how we live and what we believe), who think it's just fine for the government to help the line-cutters.

According to Hochschild, a number of people have come to distrust and resent the federal government and are more inclined to put their faith in capitalism and the free market. While the government gives away jobs to others (i.e., the line-cutters), jobs which they believe rightfully belong to them, capitalism does not. This led her to conclude that to understand Donald Trump's appeal, we need to pay more attention to how emotions inform political choices. Many people she met had grown tired of feeling marginalized, left behind, and mocked by liberal elites who tend to support big government. And they saw Donald Trump as someone willing to put an end to the line-cutting and defend their way of life.
Returning to our topic at hand, some argue that conservative white Christians can be disproportionately found among the economically left behind. There is some support for this argument. Consider the following graphs that plot the proportion of evangelicals in terms of percentage who have earned a college degree (right), average job prestige (upper left), and average annual income (lower left). They indicate that the average evangelical scores lower on all three measures compared to all other faith traditions, except Black Protestants. The difference in job prestige is not as pronounced as are the differences in income and percent with college degrees, but the pattern across all three measures is consistent. 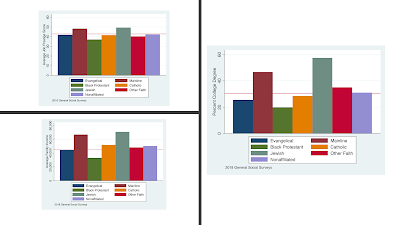 Of course, since white evangelicals score, on average, higher than Black Protestants on these measures, economic inequality is not the only factor at play here. Also, a good portion of theologically conservative Roman Catholics supported Trump as well, and the data used to create the above graphs do not lend themselves to separating white, theologically conservative Roman Catholics into their own category.
Not everyone buys the left-behind thesis, though. Trump, after all, attracted his fair share of college-educated individuals who worked in good paying jobs. The median Trump supporter makes an above-average wage ("Donald Trump and ‘Economic Anxiety’"), and in 2016, more college-educated whites voted for Trump than for Clinton ("Behind Trump’s victory: Divisions by Race, Gender, Education"). And the economy had improved from 2012 to 2016. As such, some argue that the left-behind thesis is better framed as an "economic anxiety" thesis where those who voted for Trump represent a combination of people who had fallen behind economically along with others who feared that they may soon fall behind.
Consider, for example, a 1995 study of European countries by the sociologist Lincoln Quillian. He found that racism grew among middle class majorities during periods of weak economic growth and growing minority populations. This led majority members, who were afraid of losing their jobs, income, and status, to embrace anti-immigrant and racist policies in order to hold on to their place in society.
A recent paper by Diana Mutz uncovered a similar (but not identical) dynamic in the U.S. In particular, she found that white, Christian, and primarily male voters supported Trump because they felt that their dominant status was at risk. Her results provide no empirical support for the economically left behind, although one could probably argue that economic anxiety may have fed into the perceived threat to their status, which then led a number of folks to embrace a form of populist white nationalism fueled by racist and anti-immigrant rhetoric.
Finally, Ronald Inglehart and Pippa Norris have pitted economic insecurity arguments against what they call the cultural backlash thesis, which argues that the rise of populism in Europe and the U.S. is a reaction to cultural changes that threaten the worldview of older sectors of the electorate which once was the dominant worldview. Their analysis, which focuses more on Europe than the U.S., finds support for both the cultural backlash and economic insecurity theses.
In a later post, I'll explore studies that demonstrate a correlation between white nationalism and support for Trump (although to be clear that not everyone who supported Trump is a white nationalist). Before that, though, I intend to consider the role that beliefs may have played. It's quite fashionable in academic circles to focus on structural factors (e.g., the economy, a growing minority population, rural-urban divides), but ideas do matter. So we'll take a look at some of those next time.
References
Mutz, Diana C. 2018. "Status Threat, not Economic Hardship, Explains the 2016 Presidential Vote." Proceedings of the National Academy of Sciences 115(19):E4330. doi: 10.1073/pnas.1718155115
Norris, Pippa, and Ronald Inglehart. 2019. Cultural Backlash: Trump, Brexit, and Authoritarian Populism. Cambridge, UK: Cambridge University Press.