May the GOP have an Epiphany on Epiphany 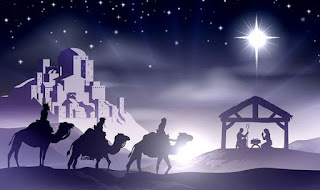 Today, January 6th, is Epiphany, which is the Christian celebration of the revelation (manifestation) of God incarnate as Jesus Christ. In the Western Church, it marks the end of the 12 days of Christmas and the arrival of the Wise Men (Magi) to visit the infant Jesus. It is sometimes called Three Kings' Day and should be when the Wise Men first appear in Nativity scenes. Symbolically, it is seen as the first manifestation of Christ to the Gentiles. In the Eastern Church, Epiphany commemorates Jesus's baptism in the Jordan and his manifestation to the world as the Son of God. Many Eastern churches celebrate Epiphany on January 19th because they follow the Julian calendar rather than the Gregorian calendar, and there's a 13-day difference between the two.
The word, epiphany, refers to more than a Christian feast day, however. An epiphany, for instance, can refer to those times when we suddenly grasp the essence of some thing or event. They are "Eureka" moments, like when a light abruptly switches on. Merriam-Webster defines an epiphany as

Today, the U.S. Congress will begin to certify Joe Biden's election as the 46th President of the United States. My hope and prayer is that with his certification, many Republicans will start coming to terms with the fact that Trump really did lose, that claiming an election was stolen isn't the same thing as proving that it was (there needs to be evidence, in other words). Put differently, this Epiphany I pray that many in the GOP will begin to see the light, that they will have an epiphany. I'm not holding my breath, but as Hans Gruber once remarked, "It's Christmas. It's the time of miracles." So, you never know.