When Prophecies Fail: The Future of QAnon 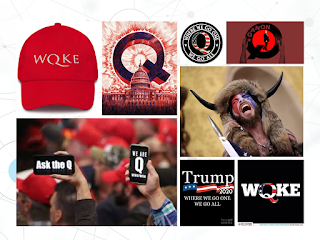 QAnon is a conspiracy theory that holds that President Trump is (or was) fighting a "deep-state" cabal of Satan-worshipping, cannibalistic pedophiles, who are running a global child sex-trafficking ring. This cabal includes liberal Hollywood actors, Democratic politicians, and other high-ranking government officials. It believes that Trump is (or was) planning a day of reckoning known as the “Storm” when thousands of members of the cabal will be arrested. This, in turn, will lead to a “Great Awakening” when we will all have an epiphany and finally see that we’ve been enslaved by a corrupt political system.

Q initially claimed to be a high-level government official with “Q clearance” – that is, someone with access to highly classified information. Now, Q is seen as a team of high-ranking individuals who are executing a military intelligence operation that has been planned for years. In fact, some QAnon followers believe the military specifically chose Donald Trump to help them carry out this operation (so much for free and fair elections).

On October 28, 2017, Q posted their first "intelligence drop" although he/she/they did not initially sign their posts "Q" (a post on November 2, 2017 was the first). These drops tend to be quite cryptic. This is because, followers claim, of the classified nature of much of the information Q seeks to share. Q can't come right out share it, so Q drops "breadcrumbs" that others can then interpret and uncover "the truth." This has led to a stunning proliferation of beliefs, such as those captured in the following chart, which was pulled together by a QAnon follower (click on this link if you want to download the chart yourself): 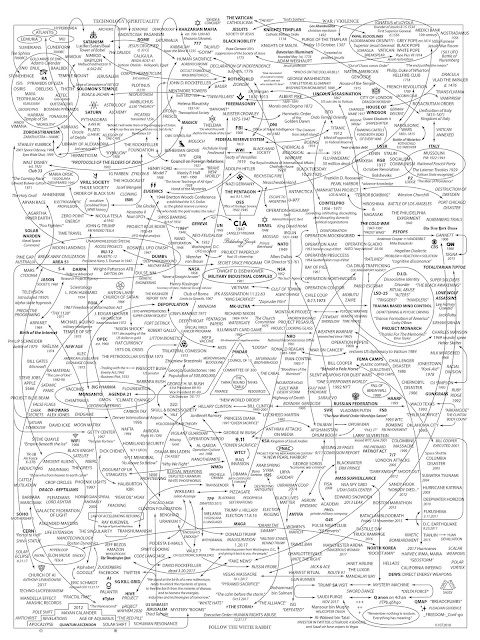 A substantial number of QAnon supporters participated in the January 6th storming of the US Capitol in Washington DC. Many believed the raid was "the Storm" (#TheStormHasArrived) and were understandably disappointed when it wasn't. They were even more disappointed two weeks later when Biden was officially sworn in as the 46th President of the United States; they had been led to believe that Trump (or someone) would prevent that from happening ("Biden Inauguration Leaves QAnon Believers in Disarray"). Add to this the fact that Q has been silent ("gone dark") for 45 days (since December 8, 2020), and there's been a lot of soul-searching in the QAnon community in recent days:
Anecdotal evidence suggests that some white supremacist groups are attempting to poach disaffected QAnon supporters, hoping to radicalize them further. Not everyone has abandoned the faith, however:
Indeed, although many are no doubt hoping that with Biden's inauguration, the QAnon conspiracy will fade into the sunset, that's unlikely to happen. When prophecies fail to come true, true believers often move the goalposts.

Consider, for example, the Millerite movement. It was composed of followers of William Miller, a Baptist lay preacher who, after years of studying the Bible, predicted that Jesus's second coming would occur around 1843-44. Miller never personally identified an exact date, but eventually the movement settled on October 22, 1844, as the day. When nothing happened, many became disillusioned. Some concluded they had been wrong, but others came up with alternative interpretations. For example, some argued that October 22nd did not mark the Second Coming of Christ, but was rather a heavenly event where the sanctuary in heaven was cleansed. It was this group of believers that developed into today's 7th-Day Adventists.

Can we compare QAnon to the Millerites (and other groups that have continued beyond failed prophecies) even though QAnon is a secular movement? I think so. Although Q's not considered to be divine and QAnon followers aren't required to believe in the supernatural (see note below), QAnon has taken on many of the trappings of religion. For example, Q's intelligence drops have become like scripture, Q is regarded as a prophet, and Donald Trump is seen (by some) as anointed by God to bring about the redemption of the United States (messiah means "God's anointed one").

So, I think it's unlikely that QAnon will just fade away. It may splinter into numerous groups (like the Millerites) with only a couple surviving for the long term, but it's likely that traces of the movement will stick around for some time. Hopefully, I am completely wrong.
Update (January 25th): Some QAnon followers believe that Donald Trump will be inaugurated as the 19th (that's not a misprint) President of the United States on March 4th. Presidents used to be inaugurated on March 4th, but the date was moved up in 1933 to shorten the period between the election and when the new President takes office. Borrowing from the sovereign citizen movement, these followers believe that an 1871 law turned the US into a corporation and did away with the original republic, and that Trump will restore this original republic on March 4th. They also believe that Franklin Roosevelt sold us out in 1933 when he abandoned the gold standard. Thus, they believe it wasn't a coincidence that 1933 was the year the date of inauguration was moved.
Note: Belief in the supernatural does not necessarily mean belief in a God or gods; for example, it can be a belief in a supernatural force, such as karma.
Posted by Sean F. Everton at 5:29 PM