The Rural-Urban Divide (Why Do So Many Christians Support Trump?, Part III) 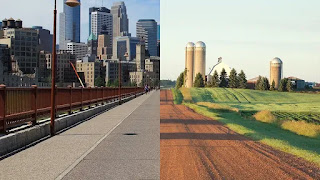 This is a third in a series of posts exploring why so many white Christians (and primarily white evangelical Christians) support Donald Trump despite his many sins. The first ("Why Do So Many Christians Support Trump? (Part I)") introduced the puzzle, while the second highlighted how diverse Christianity really is ("Who are the 81%? (Why Do So Many Christians Support Trump?, Part II)").
This post explores the rural-urban divide and how it contributes (but does not entirely explain) why such a high proportion of evangelicals supported Donald Trump. In 2016, voters in rural areas cast their ballot for President Donald Trump rather than Hillary Clinton by a margin of 20 points, and a higher percentage of evangelical voters reside in rural areas than non-evangelicals. This is captured in the graph below, which plots the proportion of rural respondents by faith tradition. It is important to point out, however, that even though white evangelicals are more likely to live in rural areas than individuals from other faith traditions, over 80 percent do not. Thus, the rural-urban divide is clearly not the only factor driving evangelical toward Trump. 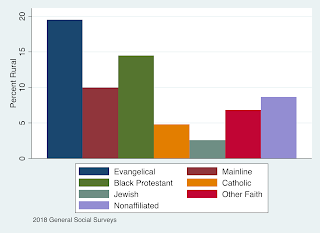 The essence of the rural-urban divide is perhaps best captured with the notion that rural America feels as if it has been "left behind," not just demographically and economically but also morally and culturally. Many living in rural communities believe that their way of life is disappearing, that small town values and the sense of community characteristic of that life are becoming a thing of the past.
But there's more to it than that. It's not just a belief that small town values are disappearing, but the perception that they're under attack: That, except for perhaps in a romantic (e.g., Hallmark movies) or nostalgic sense (e.g., weekend escapes), cultural elites (what the theologian/philosopher Friedrich Schleiermacher called "cultured despisers") regard small town America with barely-concealed contempt and view rural Americans as uneducated and backward, as holding beliefs that anyone with an ounce of brains would reject.
But that's not all. There is also a widely-held belief among rural Americans that Washington (i.e., the federal government) is broken, lacking in common sense, and absolutely clueless about the needs and wants of rural America. Add to this the perception that Washington is in league with cultural elites to force liberal values (and the political correctness that comes with them) down their throats (what some might term, "legislating morality"), and you can see why many small-town Americans would find the norm-breaking, liberal-elite hating Donald Trump appealing. Consider, for example, the following remarks captured by sociologist Robert Wuthnow in his book, The Left Behind: Decline and Rage in Rural America (Note: although the book was published after the 2016 election, he conducted his fieldwork prior to it):

“People up there in Washington, doesn’t matter what party it is, those people don’t know a thing about what’s going on down here in Gulfdale. They don’t want to listen to us. They don’t care!” (p. 97)

“Those people up there in Washington, they think they know more than we do. They treat us like second-class citizens, like we’re dumb hicks, like we don’t know what’s going on.” (pp. 97-98)

“Don't forget us... Maybe our population isn’t as big as cities, but we represent something cities never will.” (p. 99)

“[Washington's] a money-hungry, dog-eat-dog place. Lobbyists are ruining it and it’s just gone to pot. We just need somebody with a little gumption. Somebody to go up there and do what a common man knows to do. That’s all we need!” (p. 107) 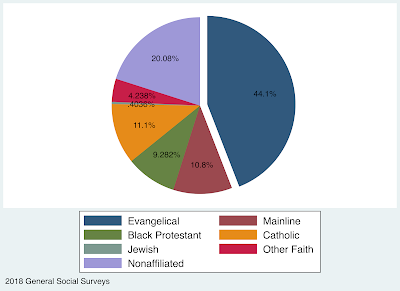 The frustration and anger reflected here is not just a rural phenomenon, however. Many Americans living in urban areas located in the Midwest and South identify more with the values of rural America than they do with values found in cities located in the Northeast and on the West Coast. There is not only a rural-urban divide, in other words. There also is a regional one (no secret there, really).
On a final note, I can't help but wonder what effect the pandemic may have on this divide. Anecdotal evidence suggests that since they can now work remotely, many Americans are leaving cities and flocking to rural America. Will this (slowly) turn some Midwest and Southern states purple? Only time will tell.
Note: For those who would like to explore this topic in greater depth, several books have touched on the rural-urban divide. Here are three worth that are accessible and worth a try:
Posted by Sean F. Everton at 1:32 PM