Why Do So Many Christians Support Trump? (Part I) 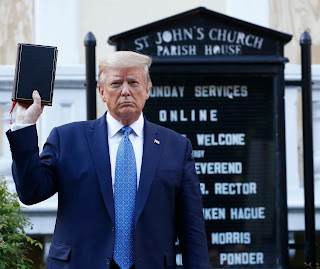 Over the last 4 years, I've been puzzled, no, disturbed, no, appalled, by why so many Christians support, and a handful seem to worship, Donald Trump. His presidency will almost certainly be remembered as one of the most corrupt in American history, but a wide-swath of Christians, and in particular evangelical Christians, seem fine with excusing away his many sins. What sins? Consider the following litany by my colleague, B.J. Strawser, an Air Force veteran and philosophy professor, explaining why he would vote for Biden (and not Trump) in this year's election (all of which he posted on Facebook on November 2nd):
What is stunning is that many of the same Christians who blindly support Trump in spite of his many sins, targeted Bill Clinton for his moral failings. Consider, for example, what William Bennett, currently one of Trump's biggest supporters, said about Bill Clinton during the Monica Lewinsky scandal:

It is said that private character has virtually no impact on governing character,” but the truth of the matter is that “a president whose character manifests itself in patterns of reckless personal conduct … cannot be a good president.” (William Bennett, "The Death of Outrage: Bill Clinton and the Assault on American Ideals")

Clearly, in Mr. Bennett's mind, character is no longer a relevant criterion for being President, at least not if they're a Republican. Consider also the Southern Baptist Convention's 1998 Resolution On Moral Character Of Public Officials.

Therefore, be it RESOLVED, That we, the messengers to the Southern Baptist Convention, meeting June 9-11, 1998, in Salt Lake City, Utah, affirm that moral character matters to God and should matter to all citizens, especially God’s people, when choosing public leaders; and

Be it further RESOLVED, That we implore our government leaders to live by the highest standards of morality both in their private actions and in their public duties, and thereby serve as models of moral excellence and character; and

Be it further RESOLVED, That we urge all citizens, including those who serve in public office, to submit themselves respectfully to governing authorities and to the rule of law; and

Be it further RESOLVED, That we urge Southern Baptists and other Christians to fulfill their spiritual duty to pray regularly for the leaders of our nation (1 Timothy 2:1-4); and

Be it finally RESOLVED, That we urge all Americans to embrace and act on the conviction that character does count in public office, and to elect those officials and candidates who, although imperfect, demonstrate consistent honesty, moral purity and the highest character.

It appears that such resolutions only apply to Democratic Presidents.

Robert Jones, a former professor and now head of PRRI (Public Religion Research Institute), has argued that long before Trump's election, the attitudes of younger Americans toward Christianity were becoming increasingly negative and pushing them toward other faith traditions. He notes "that the top three attributes young Americans associated with 'present day Christianity' were being antigay (91 percent), judgmental (87 percent), and hypocritical (85 percent)" (Jones, "The End of White Christian America," pp. 131-132). In short, as David Kinnaman, the President of the evangelical polling firm, the Barna Group, has put it, "Christianity has an image problem" (quoted in Jones, p. 132).

Anecdotal evidence suggests that Christianity's image problem has only become worse during the Trump presidency (e.g., see the book, "The Spiritual Danger of Donald Trump: 30 Evangelical Christians on Justice, Truth, and Moral Integrity," ed. by Ronald Sider). Thus, while evangelical Christians may have scored short-term gains (e.g., Supreme Court appointments) by supporting Trump, the long-term damage they have inflicted on Christianity could take several generations to fix.

My plan over the next series of posts is to consider various explanations for why so many theologically-conservative, (predominantly) White Christians supported and continue to support Trump. Some of the causes are demographic. Some are economic. Some reflect pragmatic choices made by Christians who can't stand Trump but see him as a vehicle for pursuing certain policies. Party affiliation also plays a role. But those explanations don't account for everything. There are some who see him as God's anointed agent and come close to worshipping Trump as if he's the Messiah (which, of course, means "anointed one").

I make no promises on how quickly I'll turn these posts out. But I will get them out eventually.