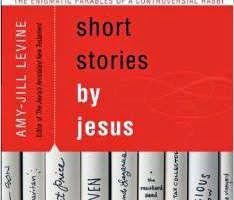 It is not unusual to find the authors of commentaries on Jesus's parables spending a considerable amount of time reconstructing the original wording of the parables. Scholars often seek to accomplish this by comparing how a particular parable differs across gospels (at least for those parables that appear in multiple gospels), typically giving greater credence to earlier gospels (e.g., Mark) over later ones (e.g., Matthew) (e.g., see Bernard Brandon Scott's, Hear Then The Parable). Traces of this approach can also be found in the Jesus Seminar's quest for the authentic sayings of Jesus, in particular, in its attempts to separate the "red" from the "pink" sayings.

Such an approach has long struck me as wrongheaded. It implicitly assumes either that (1) Jesus only uttered a parable once, or (2) that each time he told them, he told them in exactly the same way. Either option strikes me as highly implausible, which is why Amy-Jill Levine's recent commentary on Jesus's parables (Short Stories by Jesus: The Enigmatic Parables of a Controversial Rabbi) are a breath of fresh air:


When we turn to Jesus's parables, we do well to hear them as the people who first heard them, Jews in the Galilee and Judea, did and thus to recover as best as we can the original provocation. To do so requires several leaps of faith. The first leap concerns what Jesus himself said, for we do not know with certainty if Jesus actually told the parables recorded in the Gospels. Second, even if he did tell them, we know with certainty neither the composition of the audience nor their reaction. Third, it is unlikely, were he to have composed these parables, that he only used them on one occasion or told them exactly the same way each time (p. 10, emphasis added).

(You can see why I like her. She makes me feel smart!) Rather than devote endless pages to the parables' original wording, she begins each chapter with a "fairly literal translation of a short story by Jesus" (p. 23). She follows this by locating each parable in its historical and literary context and then offers her take on what the parable might have meant to its earliest listeners.

For those unfamiliar with Levine, she is a New Testament scholar who attends an Orthodox synagogue. She is one of a growing number of Jewish scholars who have turned their analytical skills to the New Testament, and have challenged numerous assumptions that New Testament scholars have held for years (e.g., see my post on Talmudic scholar Daniel Boyarin's analysis of the Gospels -- "A Jewish Christ"). Levine is probably best known for her book on the historical Jesus, The Misunderstood Jew: The Church and the Scandal of the Jewish Jesus. As in that book, in Short Stories of Jesus, Levine challenges traditional interpretations that set Jesus over against what first century Jews supposedly believed:


Thus, the Prodigal Son teaches that God loves sinners, when "the Jews" thought God only loved the righteous and didn't give a damn about sinners. Such a reading should make no sense to anyone who has read in the scriptures of Israel the story of Adam and Eve, Cain and David, and indeed the nation of Israel... Jews knew that God cared about the sinful; were that not the case, there'd be no reason to send prophets to Israel, or Jonah to Ninevah. For other Christian readers ill-informed about early Judaism, the parable of the Yeast and the parable of the Mustard Seed become teachings that reject Jewish purity laws and even Jewish identity, as if Jews somehow eschewed baked bread and spices, and should therefore thank Jesus for allowing us to have a hot dog, on a bun, with mustard (p. 21).

But I've gone on far too long. Amy-Jill's book is wonderful. If you're interested in a "fresh" reading of Jesus's parables from one of the New Testament's top scholars, pick up her book. You won't be disappointed.
Posted by Sean F. Everton at 2:16 AM