The Gospel and Russell Wilson 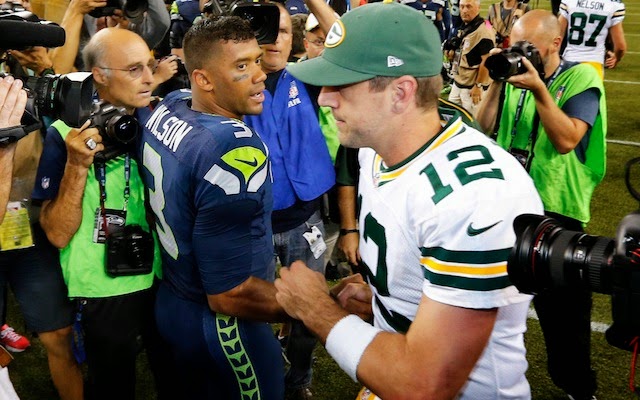 Seattle Seahawk quarterback Russell Wilson is, by all appearances, a class act. He is an active volunteer in the Seattle community. During the NFL season, he makes weekly visits to the Seattle Children's Hospital, and in the offseason he hosts the Russell Wilson Passing Academy, a youth football camp that's held in several cities, the proceeds from which went to the Charles Ray III Diabetes Association. And he's one of the few players on the Seahawks that most 49er fans like.

Still, I have to take exception to his claim that the Seahawks come from behind win over the Green Bay Packers in last week's NFC Championship game was set up by God:

That's God setting it up, to make it so dramatic, so rewarding, so special. I've been through a lot in life, and had some ups and downs. It's what's led me to this day.

It may have been dramatic and rewarding and special for Wilson, but it wasn't terribly dramatic and rewarding and special for Brandon Bostick, the Green Bay Packer who botched the on-side kick that gave the Seahawks the chance they needed to win. Does Wilson really believe that God set things up so that Bostick will be haunted for the foreseeable future (and possibly the rest of his life)? I know I don't. I'm guessing (hoping) that deep down he doesn't either. More broadly, I agree with Packer quarterback (and unwitting theologian) Aaron Rodgers that God probably doesn't care a whole lot about who wins football games (baseball might be a different story, though J).
Posted by Sean F. Everton at 4:48 PM