Trials by Ordeal Were Barbaric, Right? Not necessarily... 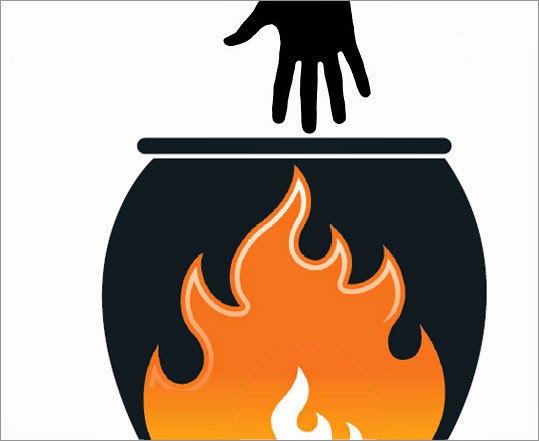 In medieval Europe when a dispute arose that couldn't be resolved by a civil court, the accused was often given the option of either pleading guilty or having the case turned over to a church court for a trial by ordeal. There were two basic types of ordeals: hot ordeals and cold ordeals. Hot ordeals consisted of trials by water where priests would boil a pot of water, throw a stone or a ring into it, ask the defendant to plunge his arm into the water and pluck out the stone or the ring. Then the priests would wrap up the defendant’s arm and revisit it three days later. And if the priest (and no one else) determined that the arm showed serious signs of having been burned, the defendant was deemed guilty of the crime. But if there was no signs of injury, he was considered innocent.

Now suppose that we moderns aren't the first to realize that people respond to incentives, but that medieval priests had figured this out as well. This means that priests might have arranged things (e.g., not really boil the water) so that most defendants who agreed to undergo a trial by ordeal wouldn’t be burned. Far fetched? Not according to the economist Peter Lesson. In a recent article ("Ordeals") he provides evidence that suggests that this is indeed what happened.

The key here is that because the priests know that the innocent person’s incentive is to undergo the ordeal, they also know that on the other side of it, the guilty person’s incentive is to decline the ordeal. The reason for that is exactly the flip-form of thinking. So now imagine that you [are guilty]. Now you’re thinking, ‘Well, I know that if I undergo the ordeal, if I put my arm in the boiling water, I’m going to have my arm boiled to rags, because I am in fact guilty. God’s not going to perform the miracle. And in the process, on top of that, I’m going to be convicted of the crime.’ It’s better for me to simply either settle with the accuser or to confess to the crime and enjoy a somewhat less harsh punishment.

If Lesson is right, then, as Freakonomics host, Stephen Dubner notes, "then the medieval trial-by-ordeal was, rather than a barbaric expression of divine justice, a rather brilliant means of sorting the innocent from the guilty. In economist-speak, this is known as breaking down a pooling equilibrium into a separating equilibrium by using game theory."

It's a good one and can be found at the Freakonomics website ("What Do King Solomon and David Lee Roth Have in Common?") or downloaded from iTunes.
Posted by Sean F. Everton at 7:00 AM