The Jesus Seminar and the Quest for the Historical Jesus 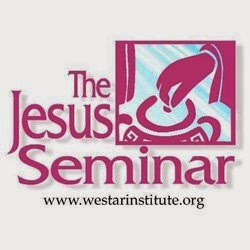 I've previously written about the Jesus Seminar and its quest for the historical Jesus. I recently completed an analysis of their voting results, which I have submitted to a couple of journals. In this post I present a brief summary of my results but do not rehash what I wrote in the earlier posts, so readers will need to follow the links below for background material. This week Tony Gill  interviewed me about my analysis for his Research on Religion podcast ("Sean Everton on the Jesus Seminar").

For my analysis I used two dependent (i.e., outcome) variables: The normalized average score and the color ranking for each of the sayings (I treated pink and red rankings as indicating an authentic saying). I included several independent (i.e., explanatory) variables in the analysis in order to determine which factors help explain the likelihood that the Fellows deemed a saying authentic. Five of these variables capture the most common criteria used by biblical scholars ("The Quest for the Historical Jesus, Part V: Criteria"):

Other independent variables included in the analysis took it account whether a saying was apocalyptic, whether it was a parable or an aphorism, what books it is found, and what sources it can be traced to.

What did I find? The average normalized score for all of the sayings was 0.242, which means that the average saying was colored black (i.e., Jesus did not say it). However, contrary to the criticisms of many of their colleagues, the Seminar Fellows did follow the criteria used by most biblical scholars. They were more likely to vote a saying authentic if it met one or more of the criteria listed above than if it didn't. That said, they do appear to have been influenced more by some of the criteria than they were by others. They were more likely to rank authentic sayings that would have embarrassed the early Church or were dissimilar from the the Judaism of Jesus' day and the early Church. In particular, dissimilar sayings were about 7 times more likely to be deemed authentic and embarrassing sayings were about 14 times more likely. We probably shouldn't get too wound up about the result for the embarrassing sayings, though, since only 34 of the 1,500 sayings met the embarrassment criterion and none were ranked "red" (32.35 percent were ranked pink).

What then can we conclude about the Seminar's attempts at identifying the authentic sayings of Jesus? We can say that although its Fellows followed widely accepted criteria, they were also influenced by their a priori assumptions as to who Jesus was, what he believed, what he said, and how he said it. In particular, they were quite enamored with aphorisms and parables, especially those in which Jesus appears as a non-apocalyptic enfant terrible, who occasionally uttered things that later embarrassed the early Church.
Posted by Sean F. Everton at 8:30 AM