Religion's Surprising (at least to some) Persistence 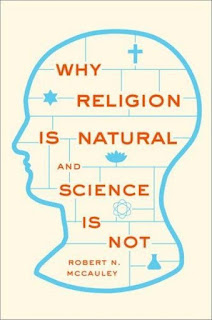 In 1966 the late (and great) anthropologist Anthony Wallace confidently declared that "the evolutionary future of religion is extinction. Belief in supernatural beings... will become only an interesting historical memory." He was not alone in this view. The conventional wisdom of the majority of social scientists at the time was that as the world became more modern, it would become increasingly secularized.

That clearly has not happened. Religion has not faded away. In fact, in some ways it is stronger now than it was a century ago. For example, in the United States in 1906 church adherence rate was at 51%. It reached a peak of approximately 60% in 1980, a level at which it has remained ever since. That's right. That's not a misprint. Church adherence rates are higher now than they were a century ago.  In fact, they are higher than they were over two centuries ago. 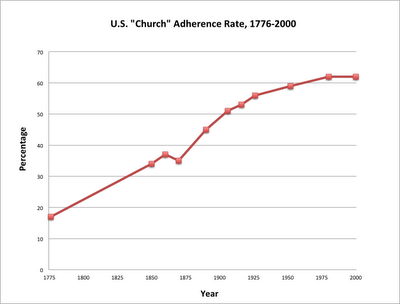 And the resurgence of religion has not been limited to the United States. While Europe remains relatively irreligious (at least in terms of church attendance), religious belief around the world is quite robust. (Even in Europe secularism may be overstated. Just because people aren't attending church doesn't mean they aren't religious (or spiritual) -- indeed, the sociologist Grace Davie has coined the phrase, "believing without belonging," to describe religious belief in Britain. Moreover, secularism tends to be self-limiting for the simple fact that secularists reproduce at much lower rates than do people of faith. Regardless, social scientists, such as Peter Berger, who was once a strong proponent of secularization theory, have repented of their earlier views and concluded they'd been wrong:


I think what I and most other sociologists of religion wrote in the 1960s about secularization was a mistake. Our underlying argument was that secularization and modernity go hand in hand. With more modernization comes more secularization. It wasn't a crazy theory. There was some evidence for it. But I think it's basically wrong. Most of the world today is certainly not secular. It's very religious (Christian Century, 1997).

There's still a few secularization theory holdouts (e.g., the sociologist Steve Bruce and scientist Richard Dawkins), but more and more scholars are not only recognizing that religion isn't going away soon (or at all) but that it needs to be taken seriously by individuals and societies as a force with which to be reckoned. Religion's persistence and influence has been explored in a number of recent books, such as God's Century: Resurgent Religion and Global Politics, God is Back: How the Global Revival of Faith Is Changing the World, and The Desecularization of the World: Resurgent Religion and World Politics.

But why does religion continue to persist? Why is it so resilient? Perhaps the most parsimonious answer is that it continues to flourish because people are responding to a genuine experience of the divine. That is, there really is a God, or gods, or some higher power that evokes a sense of awe in some of us. Such an explanation simply won't do from a social science perspective, however, which is why there are numerous "theories" of religion that attempt to explain why some people are religious. Indeed, I have a book on my office shelf that outlines eight theories of religion.

A recent theory (or set of theories) that has attracted attention in recent years (not one of the "eight") comes from the work of cognitive scientists of religion, such as Justin Barrett (Why Would Anyone Believe in God?), Jesse Bering (The Belief Instinct), Pascal Boyer (Religion Explained), Robert McCauley (Why Religion is Natural and Science Is Not), and Scott Atran (In Gods We Trust). Cognitive science isn't a discipline in and of itself (at least not yet), but instead is an amalgam of scholars trained as linguists, neuroscientists, computer scientists, anthropologists, psychologists, and philosophers. If you're wondering, not all cognitive scientists of religion are religious (e.g., Scott Atran and Jess Bering are quite vocal about their lack of faith), but they do agree (sometimes for slightly different reasons) that human beings are naturally religious, not in the sense that religious belief is biologically determined, that everyone is religious, or that what people come to believe about the divine is necessarily true, but rather that it's cognitively easy for us to be religious because it belongs to those set of cognitive capacities that are a part of the natural maturing process. Put differently, religious belief is intuitive. (Those familiar with the work of Nobel Prize winning psychologist Daniel Kahneman will recognize the similarity between this and what Kahneman calls "fast" (intuitive) and "slow" (reflective) thinking ("Thinking, Fast and Slow")).

Why they believe religious belief is intuitive, I will probably take up in a later post. For now it's suffice to note that because religion is natural, these scholars believe that in spite of the wishful thinking of folks like Richard Dawkins and Daniel Dennett, religion will always be with us. Its strength will vary from time to time and place to place, but it will never, ever, completely go away.
Posted by Sean F. Everton at 1:08 PM