A Faustian Bargain: Michael Sandel, Selling Souls and the Moral Limits of Markets

Faust is a German legend which tells the story of an intellectual who sells his soul to the devil in exchange for unlimited knowledge and worldly pleasures. Goethe' turned it into a play, and it has inspired a number of books, movies, and songs, such as the musical "Damn Yankees," which is based on the novel "The Year the Yankees Lost the Pennant,"Oscar Wilde's "The Picture of Dorian Gray," Steven Vincent Benet's "The Devil and Daniel Webster," and Charlie Daniel's "The Devil Went Down to Georgia."

While these stories of selling one's soul (or at least bargaining with it) are fictional, there is at least one case where someone has sold their soul to someone else. In a comment posted on the Freakonomics website after an interview with Michael Shermer, the editor of Skeptic magazine, Caleb B. asked:


What is it about the idea of a soul that even people who confess to not have one are hesitant to sell it? I have been trying, for the better part of ten years, to buy a soul. I’ve offered a dollar amount, between $10 and $50, for someone to sign a sheet of paper that says that I own their soul. Despite multiple debates with confessed atheists, no one has signed the contract. I have been able to buy several people’s Sense of Humor and one guy’s Dignity, but no souls. Additionally, will any Freakonomics reader take me up on this? I’m willing to spend $50 on souls. 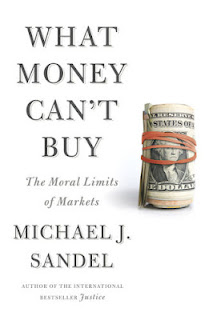 Caleb eventually found a seller, one Bruce Hamilton, who agreed to sell his soul to Caleb for $50.00. This transaction eventually led to a Freakonomics podcast on the topic ("Soul Possession"), which not only includes interviews with Caleb and Bruce but also with Mary Roach, author of "Spook: Science Tackles on the Afterlife," as well as with Harvard professor Michael Sandel, who's new book, "What Money Can't Buy," explores the moral limits of markets.


A market economy is a tool; it’s a valuable tool. It’s an instrument for achieving economic wealth, affluence, and prosperity. But as markets and market thinking come to inform all aspects of life, as everything becomes available for sale, we become a market society, which is a way of thinking and being, an unreflective way of thinking and being that just assumes that all the good things in life can in principle be up for sale. And that, I think, diminishes a great many moral and civic goods that markets and market relations don’t honor, and that money can’t or shouldn’t buy.

With Freakonomics host Stephen Dubner, Sandel explores the moral limits of a market for souls, reflecting I think a bit of skepticism. Too bad Yahweh didn't weigh in.
Posted by Sean F. Everton at 6:15 PM