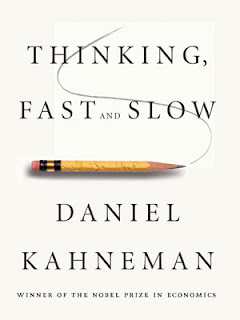 The Nobel Prize winning psychologist Daniel Kahneman's recent book, "Thinking, Fast and Slow," has become something of a modern classic. In it, he distinguishes between fast (intuitive) and slow (reflective) thinking. The former refers to situations that call for automatic responses; the latter to situations when concentration and deliberation are in order. Kahneman believes that both types of thinking are necessary for us navigate life's obstacles.

While one may be inclined to think that slow thinking is more valuable, Kahneman notes that over reliance on it can result in tunnel vision and the inability to make simple decisions (e.g., do we really want to deliberate the sturdiness of the chairs in our kitchen each time we sit down?). However, over reliance on fast thinking can lead to over confidence in our ability to fully grasp the world around us. For example, in considering the Wall Street debacle of a few years ago, he writes that the entire industry appears to be built largely on an illusion of skill, noting that research has shown that mutual fund managers perform more like dice rollers than poker players.


Kahneman’s research has been applied to a number of areas, but it is his (and the late Amos Tversky, his co-author of a number of years) application of it to economic decision making that garnered the most attention. So much so, in fact, that he was awarded the Nobel Prize in Economics in 2002. Most observers believe that if Tversky had still been alive, the prize would have been awarded to both of them.

The distinction between fast and slow thinking has been applied to the cognitive study of religion. As noted in a previous post ("Religion's Surprising Persistence"), cognitive scientists of religion have come to believe that religious belief is intuitive; it is cognitively natural. By natural they don’t mean that it is hardwired into us and that therefore everyone is religious. Rather, they argue that a belief in a God, or gods, or a supernatural force is a natural outcome of the maturational process. It is, in other words, easy for us to believe. Of course, the contents of our beliefs and practices are, in part, a product of the cultures in which we grow up. Nevertheless, getting our head around them is cognitively easy.

However, not all religious beliefs and practices are created equal. Some are “slower” than others. Some involve abstract forms of thought and as such require deliberation and reflection. That's why (all else being equal), more abstract forms of religion typically have a more difficult time attracting adherents than do less abstract ones. This is true not only across religions but also within religions. That is, not only do more intuitive religious traditions outperform less intuitive ones, but within a particular religious tradition, such as Christianity or Buddhism, strands that are cognitively natural (American Evangelicalism? Pure-Land Buddhism?) tend to enjoy more success than do those that are not (Philosophical Christianity? Zen Buddhism?).

This suggests that in order to survive, religious traditions whose beliefs and practices deviate substantially from expectations and are highly counterintuitive, they must construct and maintain what Justin Barrett, calls “cultural scaffolding,” by which he means those “special artifacts, institutions, practices [and] other devices that help people learn and use these more complex concepts ("Cognitive Science, Religion, and Theology," Chapter 6).” He continues:


The metaphor scaffolding suggests that extra structures are needed to build up some ideas or practices that are not particularly natural (close to the ground). Furthermore, scaffolding is not permanent and can be removed. Analogously, the cultural conditions or devices that help build up relatively unnatural beliefs and practices can be removed. Previously common knowledge (such as how to start a fire from natural materials) can vanish when the cultural scaffolding is removed (Chapter 6, footnote 16).

What types of scaffolding are needed? Most obviously, worship, but that's probably not enough:

In other words, successful religious traditions must put into place institutional practices that help make complex practices more understandable and transmittable. That's why we should expect to find that successful Christian denominations and congregations almost always have robust preaching along with well-developed child and adult education programs (that's a testable proposition, by the way). Indeed, a 1990 study funded by the the Lilly Foundation ("What Makes Faith Mature") concluded that of the six denominations examined (five mainline and one evangelical), the evangelical denomination (The Southern Baptist Convention) did a better job at educating its members than did the five mainline denominations (Disciples of Christ, Evangelical Lutheran Church of America, Presbyterian Church, United Church of Christ, United Methodist Church). The report carries substantial weight because mainline Protestants carried out the study.

Does this mean that religious traditions should dumb-down their theology in order to make it more intuitive? Not necessarily. Some experimental research has found “that concepts that are only slightly counterintuitive are as or more memorable and transmittable than wholly intuitive ones” (Chapter 6). That is, being a little counter intuitive may be better than entirely intuitive.

Why this is so, is debatable, but the research of Larry Iannaccone (“Why Strict Churches Are Strong”), Dean Kelley (“Why Conservative Churches Are Growing”), and Christian Smith (“American Evangelicalism” and “Moral Believing Animals”) suggest that religious traditions that demand more from their members (at least up to a point) do a better job at creating those things that attract and retain people: robust fellowship, satisfying worship, and a sense of meaning and identity. However, in order to demand more from followers (and potential followers), “slower” religious groups will have to work harder than "faster" groups at constructing and maintaining the theological scaffolding they need to flourish.
Posted by Sean F. Everton at 7:17 PM