The Appeal of Christian Nationalism (Why Do So Many Christians Support Trump?, Part VI) 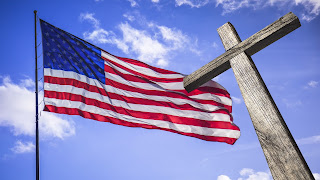 In previous posts, I have explored possible explanations as to why such a large portion of conservative Christians supported Trump in the 2016 and 2020 elections. To recap (since it's been awhile):
In this post I explore the positive association between Christian nationalism and support for Trump. No one has probably explored this relationship more than Andrew Whitehead, Samuel Perry, and Joseph Baker (2018). They have shown that holding beliefs associated with Christian nationalism is a strong predictor of whether someone voted for Trump. Consider, for example, the following graph, which plots the predicted probability of someone voting for Trump in 2016 (Y-axis) by the degree they embrace Christian nationalistic views (Christian Nationalism Index, X-axis), broken down by whether someone identifies as a Republican, Independent, or Democrat (Whitehead et al., p. 162). 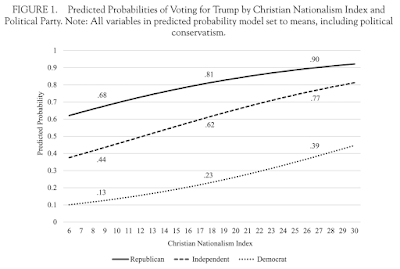 It shows that as the higher one rates in terms of Christian nationalism, the more likely they were to vote for Trump. Moreover, it shows that this was true across party affiliation although (unsurprisingly) Republicans were more likely to vote for Trump than Democrats with Independents falling in between. None of this is to suggest that of all Trump’s supporters are white nationalists, of course. It is merely to note that those who hold white nationalist views are more likely to vote for Trump than those who do not.
To construct the Christian Nationalism Index they combined six measures from separate questions that ask for agreement with whether
Possible response options for each question range on a five-point scale from (1) “strongly disagree” to (5) “strongly agree” with (3) “Undecided” as the middle category. Scores ranged from 6 to 30 (0 to 24 when rescaled) and meet standard statistical thresholds for combining multiple questions into a single scale.

What interests us here is whether conservative Protestants are more likely to embrace Christian nationalist views. The answer is yes, but but not by as great of margin as one might suspect. The graph below (from the Baylor 2017 Survey, same one used by Whitehead et al.) plots the average Christian Nationalism score by religious tradition. Unsurprisingly, conservative Protestants, on average, score higher on the index than other religious traditions, but other traditions (e.g., Black Protestant, Roman Catholic) are not too far behind. 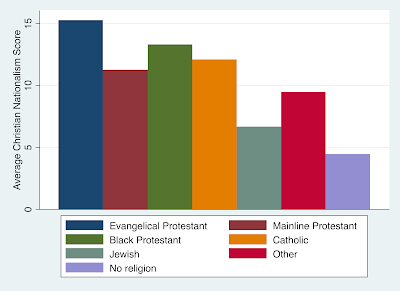 Although nationalism and authoritarianism do not always go hand-in-hand, they are often found together (Tudor and Slater 2020), as they are now in parts of Europe and the United States. So, why is that in the U.S. it is conservative Christians who are more likely to embrace Christian nationalism and support someone with authoritarian tendencies like Donald Trump? We can no longer assume that individuals attracted to authoritarianism (commonly referred to as the "authoritarian personality") are only found among conservatives, although that has been the working assumption among social scientists for decades. However, recent research, such as that by the psychologist and behavioral economist Karen Stenner, have found authoritarian attitudes among both conservatives and liberals (see also, "The Experts Somehow Overlooked Authoritarians on the Left"). Stenner prefers the term, "authoritarian predisposition," because predispositions do not always manifest themselves. They can lay dormant and are only triggered in certain situations.
It is likely that some of the factors I've considered in previous posts helped act as triggers among conservative Christians. Moreover, according to Kristin Kobes Du Mez (2020, pp. 4, 6-7) white evangelicals have long been primed to support someone who embodied a “rugged, aggressive, militant masculinity” and embraced “patriarchal authority, gender difference, and Christian nationalism.” Thus, Trump's mix of authoritarianism and Christian nationalism fit an image long embraced by evangelicals and help explain why he's become their "new high priest" in spite of his moral shortcomings (Du Mez, Chapter 15).
The question remains as to the appeal of the Christian nationalism embodied by Donald Trump. I'll take this up in my next post when I consider Reinhold Niebuhr's reflections on religious nationalism, as well as Anne Applebaum's recent exploration of the rise of authoritarianism in the West (and not just the United States). Part of the answer lies in the sense among some that a cherished way of life, a sense of national identity, is slipping away. For some Americans this means that "any price should be paid, any crime should be forgiven, any outrage should be ignored if that's what it takes to get real America, the old America, back" (Applebaum, p. 171). And they see Trump as the only one who can restore America to its former greatness, and that is reason enough to vote for him.