The Warriors Might Have Won the Championship Without Kevin Durant 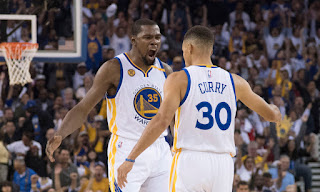 The dominant narrative is that the Golden State Warriors wouldn't have won this year's NBA Championship if they hadn't signed Kevin Durant last July. That's entirely possible, but it ignores the fact that last year, when they "blew" a 3-1 lead over the Cleveland Cavaliers, in the final two games of last year's finals, the Warriors played with an injured Steph Curry and without their starting center, Andrew Bogut, whom many consider to be one of the best, if the not the best, defensive center in the NBA. As I've noted previously, winning championships not only takes a lot of talent, but it also usually requires a little bit of luck ("What Makes a Winning Combination? Talent, Luck, and (Sometimes) Chemistry"). Last year the Warriors didn't have it. This year (and in 2015) they did.

But that still doesn't mean that they couldn't have won it all this year without Kevin Durant. As a recent FiveThirtyEight article noted ("The Warriors Didn’t Need Kevin Durant To Be This Good"), what Durant means for the Warriors is that rather than having a very good shot at winning the title every year, now the Warriors have an excellent shot. Injuries and other forms of bad luck will stay play a role, but Durant's presence on the team helps minimize the ill effects of such bad luck:


While adding Durant has been a success, it didn’t end up breaking basketball any more than the Warriors had broken it already.

Counting the regular season and playoffs, the Warriors won 84 percent of their games this year — up from 83 percent last year and 81 percent the year before. Teams have only won 80+ percent of their combined season games 11 times in the 70-year history of the NBA.1 The Warriors have now done it three years in a row.

But the Warriors’ mission isn’t just to win titles, it’s to guarantee them. And Durant is both icing and insurance policy — a guarantee that the Warriors will always have an MVP-caliber, one-man offense available. Though he makes them a little bit better in his own right, his main value comes from making what happened to them in the 2016 playoffs less likely.

So, haters can complain about the Warriors signing Durant in the off season, but there's still a good chance that the Dubs would've paraded around Lake Merritt this past week anyway.
Posted by Sean F. Everton at 5:23 PM