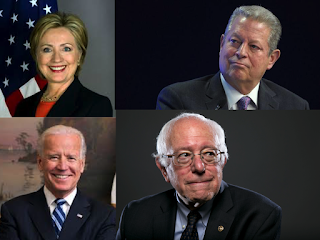 So far, Donald Trump has attracted the most attention in the current election cycle, but perhaps a more interesting story is who will be the Democratic Party's nominee. It's Hillary Clinton's race to lose, but her use of a non-classified email account to (possibly) email classified information could derail her candidacy. We will have to wait and see. The betting (i.e., prediction) markets still place her probability of winning the nomination at quite high, around 70 percent (the general election is another matter, however), and make no mistake, the markets are taking her email problems into account.

If the Republican Party is "smart," they'll stretch out the inquiry into Hillary's email account as long as possible. Their goal should be to make sure she secures the nomination before too much "hits" the fan, for then it might be too late for the Democrats to recover if she was forced to drop out of the race for President. However, if the Republicans cannot resist the temptation to go after her (which has been difficult for them over the years), and they derail her candidacy early on, they may open the door for another candidate to take Hillary's place. Joe Biden is the likely alternative, but there are some trying to convince Al Gore to run (sorry Bernie Sanders fans, it won't be Bernie). At this point, if I were Joe Biden or Al Gore, I'd bide my time to see what happens to Hillary before throwing my hat into the ring.
Posted by Sean F. Everton at 8:30 PM