Us vs. Them: When Winning Becomes Everything 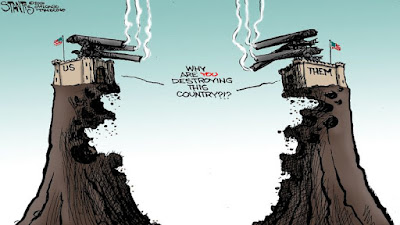 Social identity theory, which I have written about before ("Uncivil Agreement: Social Identity and Political Polarization"), argues that we derive our sense of self-worth through a combination of our personal achievements and the accomplishments of the groups to which we belong. Because much of our self-worth is tied to our group affiliations, it’s quite easy to believe that our groups are superior to others and to favor in-group members over out-group members. It can also lead to the tendency to deride other groups that present a challenge to our own group. In fact, putting down members of other groups, such as political liberals making fun of Trump followers, can make us feel quite pleased about ourselves and our place in this world. All of this is somewhat captured in the graph below: 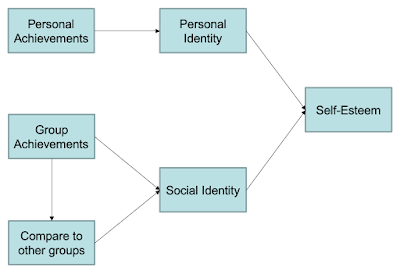 What’s more, it doesn’t take much to activate a sense of group identity. Social psychologists have run experiments where they’ve asked participants to perform a simple task, such as counting the number of dots on a screen or evaluating a paintings by different artists, and then randomly assigning them to groups but telling the participants that they’ve been assigned based on how they performed on the tasks. The participants are then asked to allocate some type of reward (e.g., money) to either members of their own group or members of another group, and most allocate more rewards to in-group rather than out-group members. This even occurred when the experiment was designed so that participants would walk away with more rewards if they didn’t favor in-group members. What’s interesting is that the participants typically didn’t know one another prior to the experiment, and after they’d been assigned to a group, they didn’t meet other members of their group (e.g., they were all assigned to different rooms). In fact, sometimes their group members were nothing more than a computer program.

Such experiments capture what is known as a minimal group paradigm; that is, they use minimal manipulations in order to trigger identification with a group. Imagine how much stronger one’s loyalty to a group and its members can be when we interact with other group members on a regular basis. Subcultural identity theory has been used to help explain prejudice and discrimination, why some religious groups thrive and others don’t, and the emergence of isolated terrorist cells that identify with groups such as ISIS or al-Qaeda.

An important implication of these studies is that sometimes “winning” becomes more important than choosing a course of action that benefits everyone: that is, not only members of your own group but also members of your opponents. And it isn’t just “winning.” Often it means beating down your opponents, punishing them, like shooting 3’s when you’re leading by 30 with a minute to go or stealing bases in the top of the 9th when you’re winning by 10 runs or more. Most of us have probably witnessed this in some of the organizations we have worked for. An office or department splits into two over one or more issues, and both sides seem more intent on winning than doing what is best. Of course, both sides convince themselves that what they’re doing to win really is what’s best for the organization.

The importance of “winning” has been highlighted by the political scientist, Lilliana Mason, who draws on social identity theory to help explain the high level of polarization in American society today (“Uncivil Agreement: Social Identity and Political Polarization”). She presents evidence that although Republicans and Democrats are not nearly as far apart on policy issues as many assume they are, both sides (and she means both sides) are far more interested in winning (e.g., politically punishing the other side) than they are in compromising, even if the latter might be better for the nation as a whole. She sees no short-term solution for the current situation although she has hope for the long-term future. That said, I’d be willing to bet that electing less polarizing candidates and not making fun of our opponents would certainly help in the short-term. Whether we (and by “we,” I mean both sides) will do this or not, however, is very uncertain.
Posted by Sean F. Everton at 10:27 PM