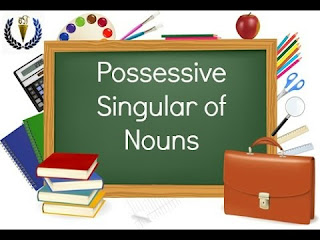 Let's start the year right by learning (or re-learning) a simple, but often violated, rule concerning the possessive singular. Contrary to much conventional wisdom (and a lot of press headlines), a possessive singular noun that ends in "s" should be followed by an apostrophe and then another "s." This is actually the first rule in Strunk and White's classic book, The Elements of Style (p. 1). As they note, we should write,

Strunk and White are not alone. The authors of Grammar Smart note (p. 122) that we should add an apostrophe and an "s" for proper nouns that ends in "s", such as

And aside from a few exceptions, the Chicago Manual of Style and the Associated Press agree ("Apostrophe-S vs. Apostrophe: Forming Possessives of Words Ending in S (or an S Sound)"). Still skeptical? Consider the following "real life" examples from a wide-range of authors and disciplines (updated from previous posts):


Johann Arnason has pointed out that Jaspers's "most condensed statement" of the axial age, describing it as the moment when "man becomes conscious of Being as a whole, of himself and his limitations," and "experiences absoluteness in the depths of selfhood and in the lucidity of transcendence," is remarkably similar to Jaspers's own version of existential philosophy.

-- Umberto Eco, The Name of the Rose, p. 17
,
Anyone who chooses to believe something contrary to evidence that an overwhelming majority of people find overwhelmingly convincing... will not be convince... And so, with this book, I do not expect to convince anyone in that boat. What I do hope is to convince genuine seekers who really want to know how we know that Jesus did exist, as virtually every scholar of antiquity, of biblical studies, of classics, and of Christian origins in this country and, in fact, in the Western world agrees. Many of these scholars have no vested interest in the matter. As it turns out, I myself do not either. I am not a Christian, and I have no interest in promoting a Christian cause or a Christian agenda. I am an agnostic with atheist leanings, and my life and views of the world would be approximately the same whether or not Jesus existed. My beliefs would vary little. The answer to the question of Jesus's historical existence will not make me more or less happy, content, hopeful, likable, rich, famous, or immortal.

I plunge into a maze of cobbled alleys and mews cottages that once comprised the Circus's outstation for Covert Operations -- or in the parlance, simply Marylebone.

At the time, Aleander had seemed full of humanist promise. With Erasmus's encouragement, he had traveled to Paris and secured a position at the Sorbonne.

There are plenty of more examples, but surely these should suffice.
Posted by Sean F. Everton at 11:42 AM