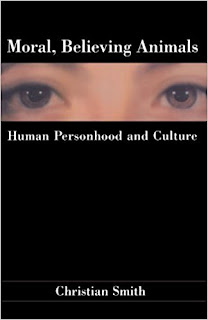 Sociologist Christian Smith is a believer in believing. He argues that all of us, religious and secular, are believers. We all adhere to some set of assumptions about the world in which we live that provides our lives with a sense of direction and purpose. What's more, these assumptions can't be independently verified as "true."


What we have come to see is that, at bottom, we are all really believers. The lives that we live and the knowledge we possess are based crucially on sets of basic assumptions and beliefs, about which three characteristics deserve note. First, our elemental assumptions and beliefs themselves cannot be empirically verified or established with certainty. They are starting points, trusted premises, postulated axioms, presuppositions--"below" which there is no deeper or more final justification, proof, or verification establishing them... [Second], most of these starting-point assumptions and beliefs are not universal... They are thus neither intellectually self-evident to nor actually shared by the rest of the human race... [Third], there is no "deeper," more objective or independent body of facts or knowledge exists to adjudicate between alternative basic assumptions and beliefs. (Moral, Believing Animals, pp. 46, 48, 52)

Instead, we come to "know" what we believe to be true through our interactions with others, in particular, through the various social groups to which we belong. In fact, Smith argues that our primary drive in life is the search for meaning and belonging, and we satisfy this drive by joining various social groups (or subcultures). Most of us belong to one or more subcultures, and to a greater and lesser extent, they provide us with world views that help us make sense of our world and our place in it. I noted in an earlier post ("Networks and Religion: Changing Our Religion") that when people leave a faith tradition, seldom do we stop believing; instead, we typically trade in one set of beliefs for another. If Smith's account is correct, then it helps to explain why that is true.

Smith also argues that we tend not to think of our world views in terms of abstract concepts, but rather in light of an overarching narrative in which our own life story plays a small part. Smith argues that “for all our science, rationality and technology, we moderns are no less the makers, tellers, and believers of stories that make sense of our existence, history and purpose than were our forebears at any other time in human history” (Moral, Believing Animals, p. 64). As the sociologist Robert Bellah notes, it's easier for us to think narratively than conceptually:


That even the narratives of early childhood are organized through relationships that are in some sense logical warns us against assuming that narrative, or symbolic representation generally, is “irrational.” Art, music, poetry, and narrative are not just effusions of feeling. They are all forms of thought and are in principle as deeply rational as mathematics or physics. It is easier for adults as well as children (even for theoretical physicists) to think narratively than it is to think conceptually, so it is not surprising that logical relationships are often expressed in narrative form. (Religion in Human Evolution, pp. 36-37)

Of course, Smith and Bellah are not alone. Narrative plays a central role in the thought of scholars as diverse as philosophers Alasdair MacIntyre and Paul Ricœur, psychologists Dan McAdams and Donald Polkinghorne, theologians H. Richard Niebuhr and Stanley Hauerwas, and social network analysts Harrison White and Paul McLean.

Smith is somewhat unique in that he actually crafts examples of "grand" narratives that help define (or perhaps construct) various world views. As Jonathan Haidt ("The Righteous Mind," pp. 283) notes, "Smith is a master at extracting these grand narratives and condensing them into single paragraphs. Each narrative, he says, identifies a beginning ('once upon a time'), a middle (in which a threat or challenge arises), and an end (in which resolution is achieved). Each narrative is designed to orient listeners morally--to draw their attention to a set of virtues and vices, or good and evil forces--and to impart lesson about what must be done now to protect, recover, or attain the sacred core of the vision." Consider, for example, the following narratives constructed by Smith:


For most of human history, the world’s material production was mired in oppressive and inefficient economic systems such as primitive communalism, slavery, feudalism, mercantilism, and more recently, socialism and communism. In eighteenth-century Europe and America, however, enterprising men hit upon the keys to real prosperity: private property rights, limited government, the profit motive, capital investment, the free market, rational contracts, technological innovation – in short, economic freedom. The capitalist revolution has produced more wealth, social mobility, and well-being than any other system could possibly imagine or deliver. Nevertheless, capitalism is continually beset by utopian egalitarians, government regulators, and anti-entrepreneurial freeloaders who foolishly seek to fetter its dynamic power with heavy-handed state controls. All who care for a world of freedom and prosperity will remain vigilant in defense of property rights, limited government, and the free market.


In the most primitive days, before the rise of private property, humans lived in communities of material sharing and equality. But for most of subsequent human history, with the rise of private property, the world’s material production has been mired in oppressive and exploitative economic systems, such as slavery, feudalism, mercantilism, and capitalism. The more history has progressed, the more ownership of the means of production have become centralized, and the more humanity has suffered deprivation and injustice. As the calamitous contradictions of capitalism began to intensify in the nineteenth century, however, a revolutionary vanguard emerged who envisioned a society of fraternity, justice, and equality. They proclaimed the abolition of private property, the socialization of production, and the distribution of goods not according to buying power but according to need. Right-wing tycoons and magnates who have everything to lose to the cause of justice fight against the socialist movement with all their power and wealth. But the power of workers in solidarity for justice will eventually achieve the utopia of prosperity and equality. Workers of the world unite! You have nothing to lost but your chains!


Once upon a time, our ancestors lived in an Old World where they were persecuted for religious beliefs and oppressed by established aristocracies. Land was scarce, freedoms denied, and futures bleak. But then brave and visionary men like Columbus opened up a New World, and our freedom-loving forefathers crossed the ocean to carve out of a wilderness a new civilization. Through bravery, ingenuity, determination, and goodwill, our forebears forged a way of life where men govern themselves, believers worship in freedom, and where anyone can grow rich and become president. This America is genuinely new, a clean break from the past, a historic experiment in freedom and democracy standing as a city on a hill shining a beacon of hope to guide a dark world into a future of prosperity and liberty. It deserves our honor, our devotion, and possibly the commitment of our very lives for its defense.


For most of human history, people have lived in the darkness of ignorance and tradition, driven by fear, believing in superstitions. Priests and lords preyed on such ignorance, and life was wearisome and short. Ever so gradually, however, and often at great cost, inventive men have endeavored better to understand the natural world around them. Centuries of such inquiry eventually led to a marvelous Scientific Revolution that radically transformed our methods of understanding nature. What we know now as a result is based on objective observations, empirical fact, and rational analysis. With each passing decade, science reveals increasingly more about the earth, our bodies, our minds. We have come to possess the power to transform nature and ourselves. We can fortify health, relieve suffering, and prolong life. Science is close to understanding the secret of life and maybe eternal life itself. Of course, forces of ignorance, fear, irrationality, and blind faith still threaten the progress of science. But they must be resisted at all costs. For unfettered science is our only hope for true enlightenment and happiness.

These aren't all of the narratives Smith constructs, but they are ones that most readers will recognize. Either we ascribe to one or more of these narratives ourselves, and/or we we know people who do. The last one should is striking in that many of those who ascribe to the scientific narrative are among those who deny the existence of such grand narratives. According to Smith, much of the debates that we witness today (e.g., over gay and lesbian rights, stem-cell research, policy toward Israel and the Middle East, etc.) are rooted in rival and not entirely compatible narratives.

The question, of course, becomes how do we resolve debates if the positions we take are embedded in world views that are incompatible with those of others? Unfortunately, there isn't a simple answer to this question. However, the fact there are competing and somewhat incompatible narratives suggests that a necessary first step is gaining an understanding of world views we don't embrace. Doing so, won't resolve any debates, and it will require a bit of empathy on everyone's part, but doing so may set the stage for meaningful and fruitful discussions that open up avenues for reconciliation.
Posted by Sean F. Everton at 10:21 PM