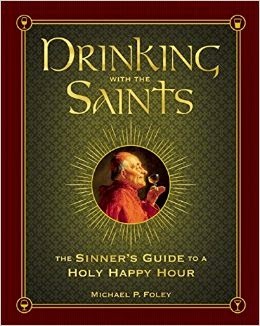 Bill Clinton was once asked what was the difference between a Baptist and a Methodist (he is a Baptist; Hillary is a Methodist). He replied, "A Methodist will say hi to you in a liquor store." However, it's not only Baptists who have a reputation for being tea-totalers. Theologically conservative Christians, at least those living in the United States, have a similar reputation. I remember hearing a story about one who, when reminded that Jesus "came eating and drinking," which led his detractors to call him a "glutton and a drunkard" (Matt 11:19), replied, "Yes. That's the thing that embarrasses me the most about him."

Partially in response to such an attitude comes a new book by the Roman Catholic theologian, Michael Foley: Drinking with the Saints: The Sinner's Guide to a Holy Happy Hour. (Ironically, Foley teaches at Baylor University, which is both a Baptist school and a dry campus.) To be clear, Foley isn't advocating on behalf of excessive drinking. Rather, he believes that alcohol, when consumed in moderation, can be a very pleasing experience and is often associated with great fellowship. (Thus, he probably wouldn't approve of Toby Keith's new song, "Just Drunk Americans"). Foley's book is the subject of the most recent Research on Religion podcast ("Michael Foley on Religion and Booze"). Here's a brief description:


What relationship is there between Christianity and alcohol? We discuss this question with Prof. Michael P. Foley (Baylor University) as he leads us through his book “Drinking with the Saints,” which is one part bartender’s guide and one part spiritual manual” (according to Regnery Press). This fun conversation reveals interesting historical tidbits on everything from beer to whiskey to wine, and Prof. Foley even reveals a couple of his own cocktail recipes created in honor of the saints.