Networks and Religion: Ties That Build Up

Why? Primarily because theologically conservative churches tend to be more strict with regards to how often members are expected to attend and with whom they can associate. Members are expected to attend worship services on a regular basis, and they are often discouraged from marrying outside of the congregation or the faith, associating with secular organizations (except, perhaps, their place of work), and participating in secular activities. With such prohibitions in place, almost by default, members of such congregations will form ties with people from their congregations at a greater rate than will members of more lenient organizations.

This, in turn, causes stricter religious groups to be more dense (i.e., interconnected) than lenient groups. Why? Because of the process that social network analysts refer to as "triadic closure," which is a fancy way of saying that friends of friends tend to become friends (or at least acquaintances). To illustrate, consider the following graph, where "A" is friends with both "B" and "C." Mark Granovetter (1973) referred to this as the forbidden triad because at some point a tie will form between "B" and "C" (i.e.,  triadic closure) since "A" regularly interacts with both and odds are that they will eventually meet: 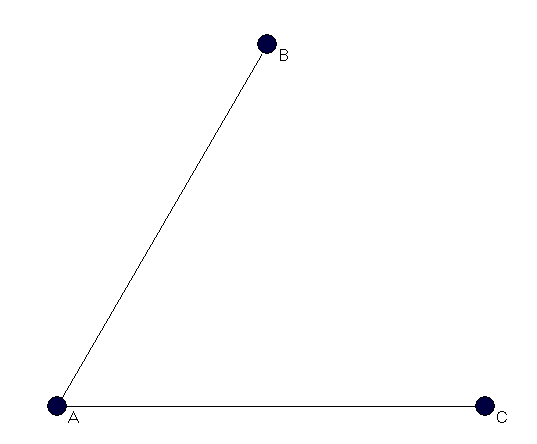 2. Denser social networks among a congregation's youth leads to improved life outcomes. There is increasing evidence that American congregations that provide youth with relatively dense networks of social ties help to link them with people in the congregation (e.g., older adults, youth pastors, parents of friends, etc.) who not only discourage them from engaging in negative life practices (e.g., refraining from drinking, drug use, etc.) but also help parents monitor and supervise their kids' activities (Smith 2003). In particular, Christian Smith found that the more religiously involved American youth and their parents are, the denser are their networks:


Those parents who do not attend church or synagogue regularly and whose children had not participated in a youth group almost invariably were the least likely to know their children's friends' names, to know their parents, to speak with their parents; and to know their children's teachers' names or to have met or spoken with them. Religious participation by either the youth or the parent alone is associated with greater network closure as measured by these five variables (Smith 2003:262).

3. Religious social networks are positively associated with life satisfaction. As I noted in a recent post ("It's True: Money Can't Buy Us Love"), wealth doesn't guarantee love. Nor does it guarantee happiness. A study conducted by the economist, Richard Easterlin (1995), compared income (adjusted for inflation) with subjective well being (SWB) from 1946 to 1989 and found that although income rose fairly constantly over that period, subjective well being did not (see the graph below, which reproduces Figure 10.1 in Matthew Lieberman's book, "Social: Why Our Brains Are Wired to Connect"). In fact SWB actually declined slightly over that period of time. Similar correlations (or lack thereof, rather) have been found in several countries, perhaps the most dramatic in Japan where over roughly the same period of time, income rose over 500 percent but SWB remained unchanged. 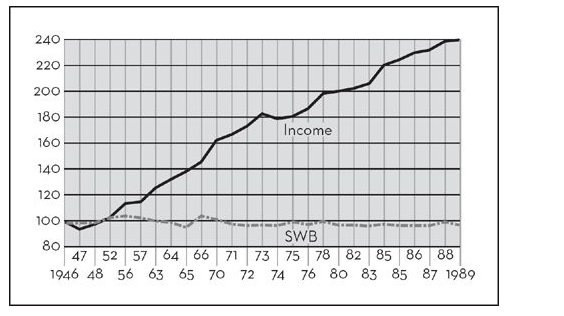 And guess what group of people are more likely to be married, socialize, and volunteer? That's right: People of faith. Social scientists have known for some time that people of faith are, in general, happier and healthier than others, and research suggests it's because they are embedded in denser social networks than are secularists.

There does appear to be limits to the benefits of dense networks, however. Research has found that individuals embedded in very dense networks are more likely to embrace extreme beliefs, primarily because they seldom interact with others who don't share their views. We will return to this later when we see how people embedded in dense networks that are isolated from society can sometimes lead them to embrace radical views and engage in violent behavior.