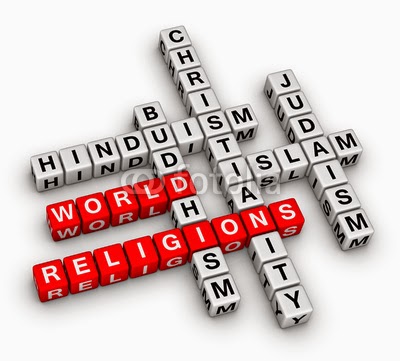 Recently, the political scientists Zeev Maoz and Errol Henderson, drawing a wide array of available data, compiled a world religion dataset, which counts the number of religious adherents by nation state from 1945 to 2010 for 14 major world religions. They also broke the counts down by religious families within the major religions (e.g., Catholic, Protestant, Orthodox, Anglican). Their data are available at the Association of Religion Data Archives (aka, the ARDA) ("World Religion Dataset") where you can find a description of how the data were collected and coded. A more complete summary of the data can be found in Maoz and Henderson' article, "The World Religion Dataset, 1945-2010," where they also discus some of the limitations of the data.

While there's no point in rehashing their entire article, a couple of interesting things did jump out from the paper. These are captured in the figure below, which plots the percentage of the major world religions over time. 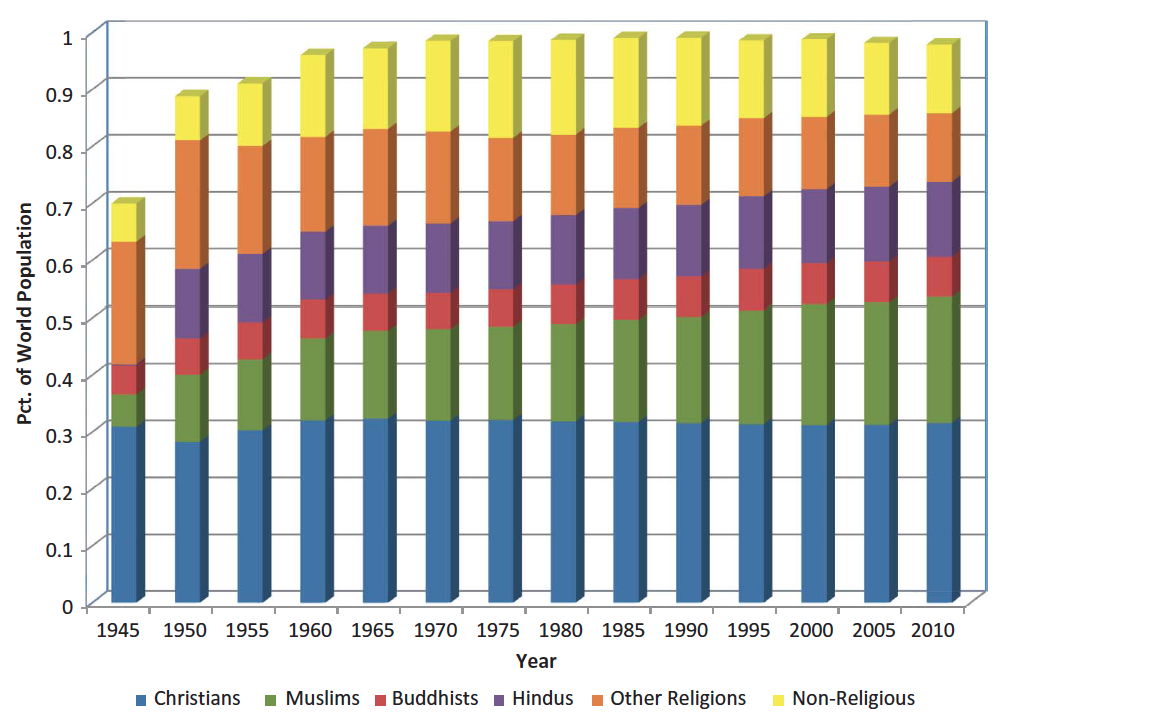 The jump in the percentage of religious adherents from 1945 to 1950 primarily reflects the fact that a significant portion (30%) of the world's population did not live in nation states in 1945 whereas by 2010, more than 98% did. However, as Maoz and Henderson note,

Since the mid-1970s, the changes in the size of the international system were relatively marginal, and these changes reflect more rearrangement of the system (secessions and partitions of multiethnic entities... So that at least some of the increase in religiosity reflects an actual trend rather than a combination of statistical artifacts (p. 279).

This is captured, in part, by the yellow bar, which measures the percentage of the non-religious population. It indicates that the percentage of non-religious reached a peak in 1980 (16.7%) and has been in decline ever since. Some of this decline reflects the collapse of Communism, which "led many people who had declared atheism in the Communist world to now reclaim their religious identity" (p. 280). Moreover, as I've noted elsewhere ("How Religion Benefits Everyone, Even Nonbelievers"), a large portion of the religiously unaffiliated are quite religious.

A couple of other trends are worth noting. One is that Christianity (blue bar in the figure above) remains the largest religion in the world, accounting for slightly over 30% of the world’s population, a proportion that has remained relatively stable since 1945. Another is that Islam has been growing rapidly (green bar in the figure above) and now accounts for about 22% of the world's population. Hinduism and Buddhism have also experienced some growth. Hinduism's growth has been relatively modest, but the proportion of Buddhists has almost doubled, from 4% in 1950 to 7% in 2010. Interestingly, however, the rest of the world's major religions have experienced decline with Judaism shrinking the most from 0.5% of the world’s population in 1950 to 0.2% in 2010.
Posted by Sean F. Everton at 9:32 AM