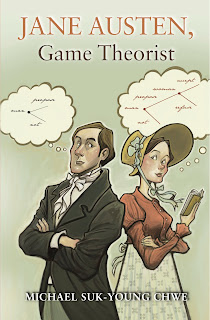 Game theory is the use of mathematical models to study of strategic decision making. Although generally the province of economists and other social scientists, it entered popular culture with the release of the movie, A Beautiful Mind, about the life of mathematician, game theorist, and Nobel Laureate (in economics), John Nash. Modern game theory is generally seen as getting its start with the publication of a paper by John von Neumann, but there are earlier precedents, such as (Blaise) Pascal's Wager, which argues that believing in God is the strategically rational thing to do because you won't be any worse off if you're wrong, but you'll be a whole lot better off if you're right.

There may be other precedents as well. Indeed, UCLA political scientist, Michael Chwe, argues that the author Jane Austen was a game theorist of sorts ("Jane Austen, Game Theorist"); he notes that her novels are chock full of the tools that game theorists use, such as strategic thinking and decision analysis:


There are lots of little parables, or little asides, in the novels which don’t have anything really much to do with the plot or anything. You could just take them out and no one would care, but they do seem to be little explicit discussions of aspects of choice and aspects of strategic thinking. So, for example, in Pride And Prejudice, the very first manipulation is kind of what gets the whole novel started. The Bingleyscome into town and so the Bennet family has five unmarried daughters, and that’s kind of a huge problem. So Mrs. Bennet is super-focused on getting her daughters married and for obvious reasons. It’s not like they can get jobs or anything. If that is the main way, you could become either a governess or you could get married. That’s basically it. So the very first manipulation is Mr. Bingley shows up with his sister and they rent out Netherfield which is this estate nearby. And so Mr. Bingley’s sister invites Jane to come for dinner. And the first manipulation is Mrs. Bennet says, “Well you’ve got to go on horseback.” … The daughters say, “Why horseback? Shouldn’t she take the carriage?” And Mrs. Bennet says, “Well, it’s going to rain and if she goes on horseback it is very likely that they will invite her to stay the night, and hence she’ll get to spend more time.” [I]t seems kind of silly but you have to play for keeps. This is a big deal. If you know, if somebody marriageable is nearby and you have a chance to spend 20 more minutes with that person, you’ve got to go for it. … And so in Pride And Prejudice, Mrs. Bennet is not a very sympathetic character, and she seems to be very foolish, but if you look at what she accomplishes, it is pretty good.

The above quote is taken from a recent Freakonomics podcast, in which Stephen Dubner interviews Chwe, as well as Dubner's Freakonomics co-author, Steve Levitt. As always, you can download the podcast from iTunes or listen to it at the Freakonomics website ("Jane Austen, Game Theorist") where you can also access the audio transcript.
Posted by Sean F. Everton at 11:16 PM